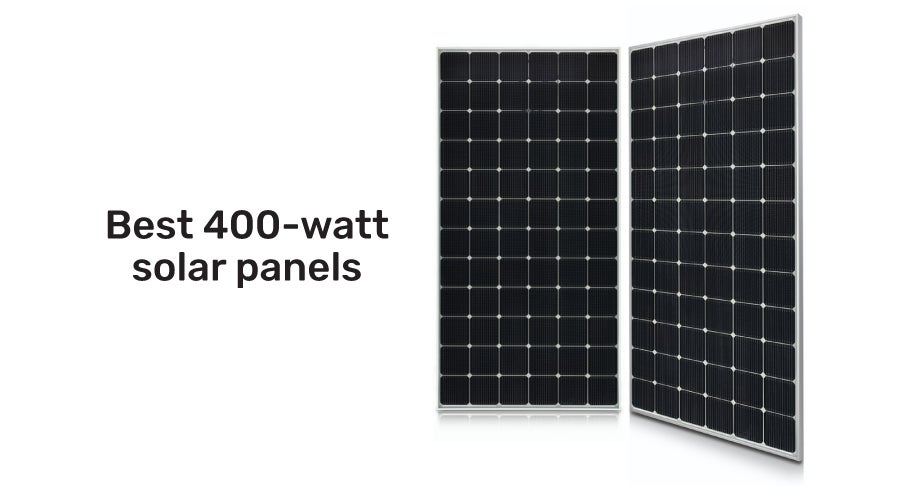 Solar panels are getting bigger. Just five years ago, the biggest solar panels were barely 300 watts. Now, in 2022, we’re seeing the release of residential solar panels measuring in at 400 watts, or even larger.

The increase in solar panel size has been made possible by advancements in solar cell technology. But the proliferation of new solar panels that are 400 watts-plus also has to do with one-upmanship between solar panel manufacturers, with each eager to prove that their solar panel is the biggest.

But when it comes to solar panels, does size really matter? Is a solar panel 400 watts (400 W) in size a better choice for your home than a more common 300-350 W panel? And which of the 400 W solar panels currently on the market are worth considering? We’ll answer these questions in this blog.

Solar panels are sized based on their output capacity. A 400-watt solar panel is a solar panel capable of producing 400 watts of instantaneous DC electricity under ideal Standard Test Conditions (STC).

What is the daily power output of a 400-watt solar panel?

You can check the exact figure for where you live using the peak sun hours figure for your location. Sunny locations in Texas, for instance, get 6 peak sun hours (PSH) per day, on average. Simply multiply panel wattage by the number of PSH  - 400 W x 6 PSH - and we see average daily power production would be 2,400 watt-hours (2.4 kWh) there.

Can I use 400-watt solar panels for my home?

Yes. You can wire together several individual 400-watt panels to build the solar system size you need.

However, as of 2022, 400-watt solar panels are still an uncommon size in residential solar power installations, with most consumers opting for panels in the 300-350 watt range.

Yes. RVs and boats have limited space and power requirements, so they could use a single 400-watt solar panel for their off-grid power needs.

Here are the best solar panel models that are 400 watts in size, or slightly bigger.

We’ve chosen solar panels made exclusively by the best solar panel manufacturers: all are among the top 10 brands with the highest consumer review scores.

For this list, we’ve only included solar panels that have cell configurations suitable for home use, i.e. 60-cell (120 half-cell), 72-cell (144 half-cell), or sizes that fall in between.

It’s worth noting that there are solar panels that are even bigger; Trina Solar, for example, now offers a massive 120-cell, 600-watt solar panel. However, these solar panels have a very large physical footprint and are only really suitable for solar farms.

Yes, 400 watts cost more than panels that are a smaller size. And 400-watt panels don’t cost more because they produce more power; they’re more expensive in relative terms as well, i.e. they cost more per watt.

Solar panel manufacturers have to employ more advanced manufacturing processes to produce a solar panel that produces more power without a corresponding increase in size. Further, 400-watt panels are new, higher-end models, and solar panel makers tend to include a higher margin on these products.

Expect to pay a premium of roughly 5-10% per watt if you build your solar energy system using 400 W solar modules over modules in the more standard 300-350 W range.

Reasons to get 400-watt solar panels

Make the best use of a small space

A lack of roof space is the biggest reason to get a 400 W (or bigger) solar panel.

The largest solar panels - those that are 400 watts or more in size - are built using the most efficient solar cell technologies. The more efficient a solar panel is, the less space it takes to produce a given amount of power.

So if you’re trying to squeeze the maximum solar power out of a given space, look for 400-watt solar panels with a module efficiency of 20% or higher.

If you use 400-watt solar panels, you are less likely to have problems with your system over the life of the panels.

While solar panels themselves are unlikely to fail, the chances of failure with allied equipment are higher. For instance, module-level power electronics (MLPE) - microinverters and power optimizers - are often used with each individual panel to meet code requirements.

By using fewer panels, you reduce the need for MLPE, and thus there’s a much lower chance you’ll encounter problems both within and outside your warranty period.

Most homeowners installing a solar energy system on their roof will require between 15 and 30 400-watt solar panels, assuming they are installing systems between 6 kW and 12 kW in size.

That would require roughly 329 and 658 square feet of roof space - before allowing for access and setback requirements, which vary from state to state.

Here are average figures for California, Texas, and Florida:

Do bear in mind that these are average figures, using just three states as an example. The right solar system size for your home will vary based on a variety of factors, including - but not limited to - your energy usage, your utility rates, and the climate where you live.

You can find out the recommended solar system size for your home by entering your address in the calculator below.