What is a solar farm? Costs, land needs & more 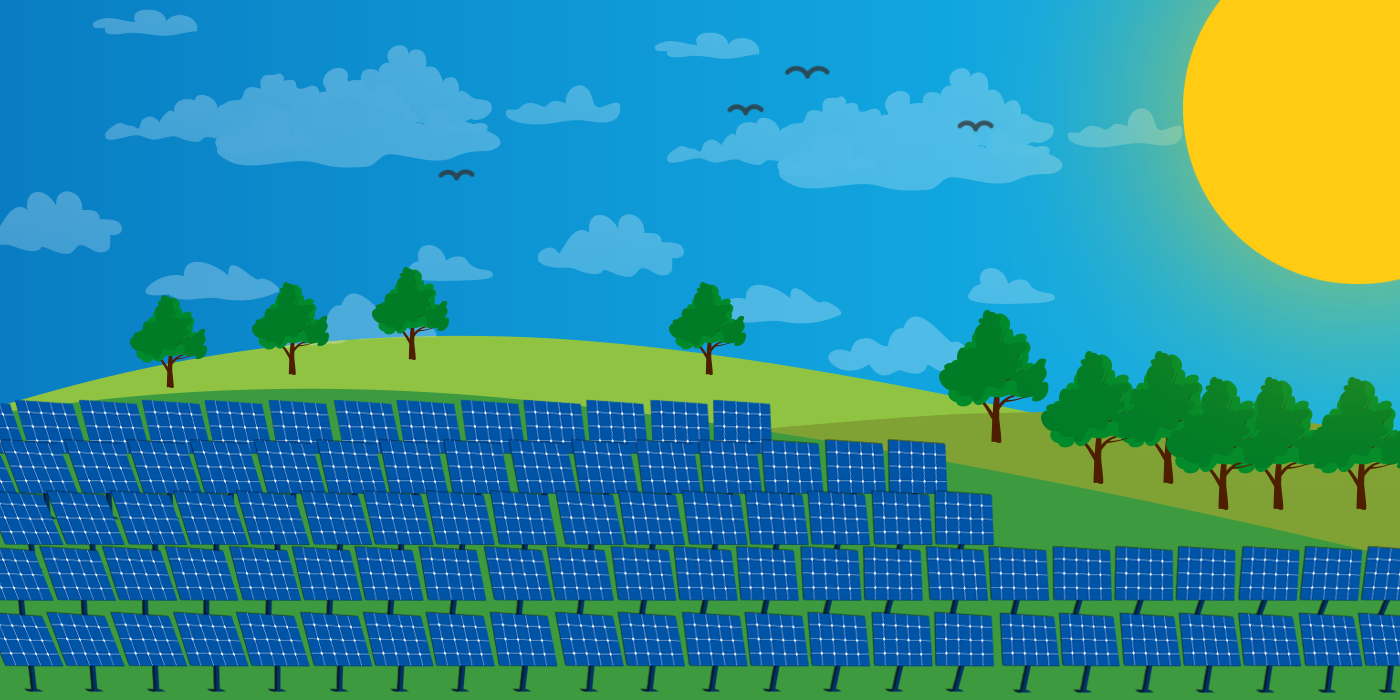 Everything you need to know about solar farms.

Solar power is grabbing the attention of farmers and landowners across the country.

After all, solar is being hailed as the new ‘cash crop,’ offering far superior returns than traditional items like corn or soybeans. (Just Google ‘solar panels cash crop’ and you’ll see what I mean).

Calculate the costs and savings of going solar

What is a solar farm?

Solar farms are large-scale, ground-mounted solar installations. They use photovoltaic (PV) panels or other means of collecting solar energy, like concentrating solar systems, to harness the sun’s power.

Solar farms are also known as ‘solar parks,’ ‘solar plants’ and ‘solar power stations.’ They operate as power plants, just like the fossil-fueled power plants that have generated electricity for consumers for the last century.

They’re different from rooftop solar systems and even commercial solar power systems in a number of important ways.

Utility-scale solar farms can have a capacity of anywhere between 1 MW to 2,000 MW. Community solar farms, on the other hand, are typically under 5 MW in size, and it's not uncommon to find ones that are under 100 kW.

Another key difference between the two types of solar farm is who they provide their power to.

Community solar farm projects serve subscribers or members who have paid for a share of its power. Utility solar farms, on the other hand, serve the utility company and all of its customers as part of the energy mix it carries on its power lines.

Read more: What is community solar?

How much does a solar farm cost?

These figures are based on the SEIA’s average national cost figures in Q4 2021. They also assume that you already have the land to build the solar farm on.

Solar farms are much cheaper to build and operate than rooftop solar systems. SEIA stats show that residential solar panel systems — which are typically under 20 kW —cost $3.06 per watt.

In other words, the cost per watt for a solar farm is well under a third of the cost of installing residential solar power.

The low cost of solar farms is also why utilities are increasingly using solar farms when adding new power generation capacity. Solar isn’t just one of the cheapest sources of renewable energy, it's now also competitive with fossil fuel energy sources, as well!

Here are the top questions asked by those interested in starting a solar farm on their property:

1. How much land does a solar farm need?

With all the equipment and space between panel rows, a 1 MW solar farm typically needs 6–8 acres, according to GTM Research.

Be aware that with large solar projects, you don’t just need space for the solar arrays. Land is also required to house allied equipment like inverters, and space needs to be left between rows of solar panels for repair and maintenance access.

2. How long does it take to build a solar farm?

Depending on the size of the solar project and the number of people working on it, construction on a solar farm can be completed in a matter of months.

Siting and permitting, however, is a lot more complicated. It can take 3–5 years to get all the necessary approvals and contracts completed for a solar farm.

After a solar farm is complete and online, it needs little maintenance, and can be serviced about 3–4 times a year.

3. How much money can you make with a solar farm?

In terms of revenue, you can earn in the ballpark of $40,000 per year by selling the electricity from a 1 MW solar farm.

Here’s an explanation of how solar farms generate revenue.

Utility-scale solar farms sell their power by entering Purchase-Power Agreements for their generation on the wholesale electricity market. This can be done using electricity marketplaces such as LevelTen Energy.

According to LevelTen Energy’s P25 national index, in Q4 2021, solar power traded at $29.75 per MWh. The P25 index shows the 25th percentile of PPAs traded for less than this, while 75% traded for higher, and thus is a pretty conservative figure.

These, of course, are just average figures. Your actual revenue can vary significantly based on factors such as solar power production in your area and the going rate for solar generation in the wholesale market.

Moreover, do note that there are wide variations in PPA values based on the wholesale electricity prices in your Regional Transmission Organization area.

How much do solar farm leases pay?

Landowners who rent out their land for a solar farm can earn between $250 and $3,000 per acre a year, according to top solar land lease websites.

This is an option for those who don’t want to build their own solar farm, but rather lend out their property to an external solar developer.

You might be wondering why there’s such a big range of lease rates. Its because there are many different factors based on where you area which can affect the going price for a land leases; these include:

In short, the amount you can earn by leasing out your land for a solar farm really depends on market conditions in your area.

Agreements are generally long-term, between 15 and 20 years, with options to extend for as long as 50 years. They also include annual escalators 1.5 to 2.5% to account for inflation.

Some developers even offer to pay for the leases as a large upfront payment.

What are the largest solar farms?

Right now, solar farms are enjoying their time in the sun — no pun intended. The solar industry is building ever-bigger solar farms thanks to the improved economics of solar energy generation, and the desire of governments to switch to renewable energy to avoid climate change.

The biggest solar farm in the United States

The Copper Mountain Solar facility, located in Eldorado Valley, Nevada is currently the biggest solar farm in the U.S. It has a total installed capacity of 816 MW.

It started its life in 2010 as a 86MW project, and has since undergone four additional expansions. The most recent addition, a 250MW unit that went online in March 2021, helped Copper Mountain overtake the Solar Star project in California as America’s largest solar facility.

Mammoth Solar Farm - set to be the biggest in the US

The Mammoth Solar is a $1.5 billion project currently under construction in northern Indiana. Once completed, it will have a total energy generation capacity of 1,650 MW, which will make it twice as big as the current largest solar farm in the US (Copper Mountain).

The aptly-named Mammoth Solar Project will cover an area of 13,000 acres, and have a total of roughly 2.85 million solar panels.

The project is scheduled to become fully operational in 2024.

The largest solar farm in the world

As of March 2022, the largest solar farm in the world is Bhadla Solar Park, in the Rajasthan desert region of India.

The 2.2 GW Bhadla Solar Park is on the fringes of the Thar Desert in India; temperatures there go up to 126 degrees Fahrenheit.

The future of solar farms

Moving forward, community solar projects, utility-scale solar projects and rooftop solar will all be part of the renewable energy solution providing clean energy around the US and replacing fossil fuel power.

Large-scale solar will continue to get cheaper as developers of solar farms find more ways to reduce financing costs and equipment costs keep coming down. Expect to see many more solar farms, and even bigger ones, in the near future.