What is net metering and how does it work? 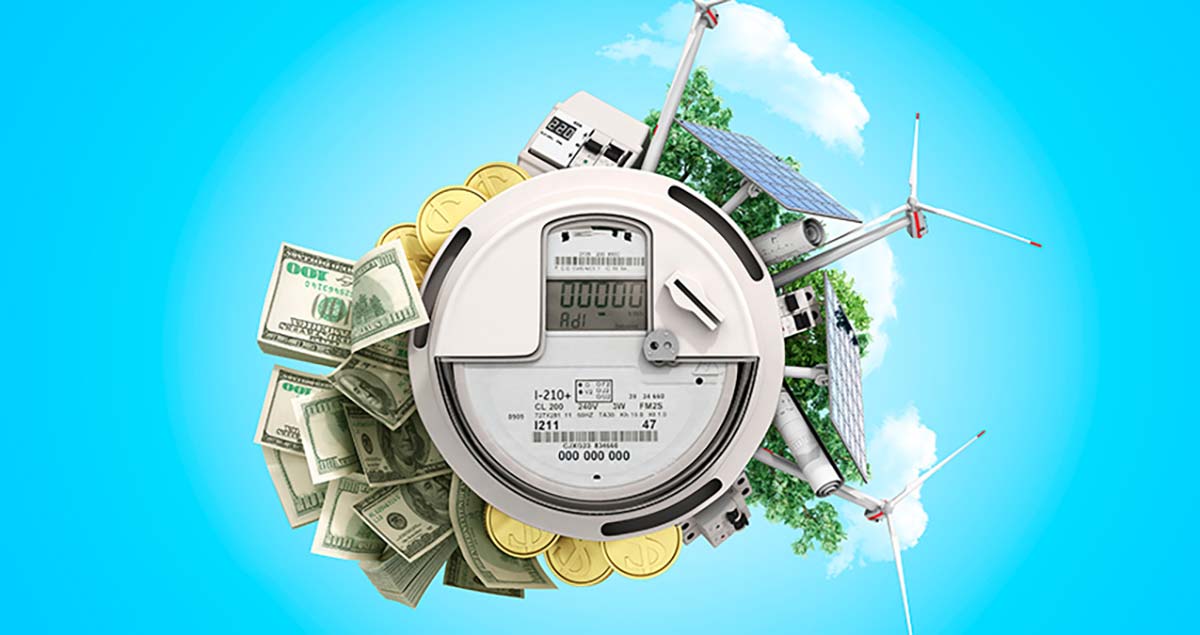 Thanks to net metering, your solar panels can save you - and help you make - a lot of money.

There are many advantages to using solar energy to power your home, from its cleanliness to providing independence from the electric grid. But one of the sweetest benefits of solar energy is the big financial savings.

Let’s take a closer look at what net metering is and how it can easily put money back in your pocket.

What is net metering?

Net metering, also called net energy metering or NEM, is a utility rate structure that requires your utility company to purchase the excess solar energy your solar panels produce at the full retail rate of electricity.

This means when your solar energy system produces more electricity than your home needs, the excess electricity is sent to the power grid and your utility will pay you for it.

In fact, if you have the right size rooftop solar system, you could make enough solar power to cover all of your energy usage for the year and wipe out your utility bill entirely!

How does net metering work?

Without net metering, all of that extra solar energy your panels produced would be sent to the grid, and you wouldn’t get anything for it!

On the other hand, with net metering, your utility company will pay you for that solar electricity you send to the grid. Usually, utilities pay you back by applying an energy credit to your electric bill for each kilowatt-hour (kWh) of solar power you’ve sent to the grid.

You can watch our video on grid-tied solar installations to get a better understanding of how a solar panel system powers a home during the day:

Those net metering credits can then be used to offset any energy you take from the grid when your solar panels aren’t producing electricity - like after the sun goes down. This allows you to get the full economic value of all of the solar energy your panels produce.

In other words, you don’t have to pay for all of the electricity you use from the grid because your net metering credits will cancel out your future grid usage, which is what makes net metering so valuable!

What are the benefits of net metering?

The greatest benefit of net metering to solar homeowners are the utility bill savings. Net metering can result in tens of thousands of dollars in savings over the lifetime of your solar panel system.

If your solar system is sized correctly, you can potentially wipe out all of your energy use costs in a billing cycle. Keep in mind though, your electricity bill probably includes some fixed charges that net metering will not eliminate.

Areas that offer full retail net metering will have much shorter payback periods than places that don’t. This is because solar homeowners will be saving more on their electricity bills, and thus recouping their investment costs faster.

For example, a solar power system in New Jersey would have a payback period of between 4 to 5 years, thanks in large part to net metering. A system in South Dakota, on the other hand, could take up to 12 years to pay off because the state has no form of net metering in place.

Net metering isn’t the only thing that impacts your solar payback period. Things like the size of your photovoltaic system, the amount of electricity you use, the cost of your installation, and the solar incentives and rebates in your area will all play a role in how long it will take to pay back your solar panels.

No need for expensive battery storage

Net metering ensures you get the most out of your solar panels. When your utility offers net metering, it allows you to use the grid as a ‘virtual’ battery to store the economic value of your excess solar power.

Without net metering, you would have to install a solar battery to store and use your excess generation, which will cost you a couple thousand dollars. Without net metering or energy storage, all of the extra power would get sent to the grid and you wouldn’t get any value from it.

Reduces pressure on the grid

Residential solar panels provide a big benefit to utilities and their customers because they help reduce the amount of stress on the electric grid distribution system. Because solar homeowners aren’t using power from the grid but using their own electricity instead, there are less people drawing power from the grid directly.

Plus, when a solar system sends excess energy to the grid, that electricity is used by other non-solar utility customers so they can meet their own energy demands. This takes even more pressure off of utility power plants.

Relieving some of the stress from the electric grid is especially important now in places like California, as heat waves become more common and utilities can’t meet energy demands.

Not all net metering policies are created equal

Net metering has come to be a catch-all phrase that is used to describe any method that utilities use to purchase solar power from homeowners. True net metering is what we have described through this article - when you receive the full retail rate of electricity for each kWh of power you send to the grid.

More and more states are switching to alternative net metering programs which don’t give homeowners the full retail rate of electricity for excess solar energy sent to the grid. Why? Because utility companies claim net metering causes electric prices to rise for non-solar customers.

This issue, called cost-shifting, does occur when there is a substantial amount of solar installed on the grid. However, very few states are close to reaching this threshold, so it seems the war that’s being waged on net metering is more about protecting utility profit margins and political agendas than it is about rate hikes for customers.

You can read our official ranking of net metering policies in the United States to get a better idea of what kinds of net metering rules are out there and what they mean for solar in your state.

Is net metering available in all states and cities?

In addition, major utility companies in Idaho and Texas offer net metering to their residential customers without being mandated to do so. South Dakota and Tennessee are the only states that do not have any form of net metering in place at all.

You can find out specific information about programs in your area by selecting your state from the below table, which shows each state and the various types of net metering as of September 2020:

*Major investor-owned utilities in these states offer full retail net metering even though there is no state mandate requiring them to do so.

We recommend consulting with local solar installers for the most accurate and up-to-date information on net metering in your area, as policies are always changing and can vary between utilities.

If your state allows it, having a net metered solar system is the best way for you to take advantage of renewable energy while saving thousands of dollars over the lifetime of the system.

Are solar canopies and carports worth it?

What is Concentrated Solar Power (CSP)?

Concentrated solar power (CSP) uses special mirrors to concentrate the sun’s energy; the collected heat is then used to generate power on the utility scale.

Some solar installers use inflated estimates of utility price growth to make it seem like savings will be higher than they likely will. It’s time to stop.

What is a home energy audit - and is it worth it?

A guide to home energy audits, including how much they cost, how you can perform them yourself, and whether or not they’re worth it.

The electric grid was built for a fossil fuel-centered world and must be updated to accommodate a 100% renewable energy plan.