What are solar panels? A beginner’s guide

Solar panels are devices that produce electricity from sunlight. People also call them solar modules. The electricity produced by them is known as solar power or solar energy. 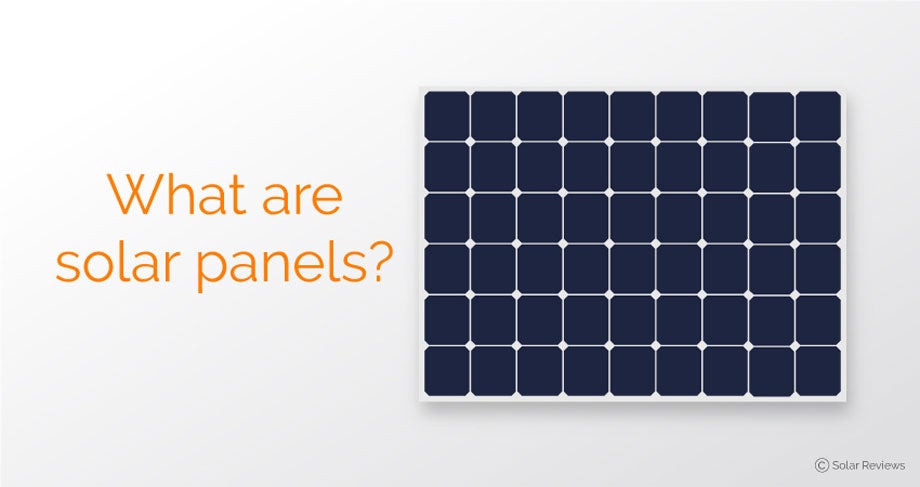 What is a solar array?

A solar array is when multiple solar panels are connected together.

What is a solar panel system?

What does photovoltaic mean?

A solar panel unit consists of solar cells, usually 60 or 72 of them. As light hits a cell, electrons are separated from the cell’s silicon atoms. The electrons flow through the cell, and that action produces direct current (DC) electricity. The DC electricity output is then sent to an inverter, which converts it into alternating current (AC) electricity. AC electricity is the kind of electrical power that is used in homes, offices, etc.

What happens next? Well in the case of solar power systems installed in a home, there are 3 options. The electricity can be used to either meet the home’s electricity needs, charge a battery storage unit, or sent to the power grid to be used by someone else. For more details, here’s a more in-depth look at how solar panels work in your home.

Solar panels in action are completely green. They produce no carbon emissions or waste products as they convert sunlight into electricity. This is in stark contrast to traditional fossil fuel power stations, where all electricity output is based on burning coal, natural gas or petroleum - a process that releases climate-changing carbon dioxide (CO2).

There have been concerns raised about carbon emitted during the production of solar panels. Indeed, making solar panels is an energy-intensive process. However, thanks to manufacturing improvements and faster turnaround time, solar panels production process is cleaner than ever. In fact, after the numbers were crunched, a 2016 research report concluded that from 2018 onwards “solar energy’s environmental credentials really will be spotless.” That sounds like a resounding ‘yes.’

Should I get solar panels for my home?

The Washington Post provides a short and sweet answer to this question:

“If you’re just as interested in saving money as you are in saving the planet, solar panels can help you do that. Their price has come down, their effectiveness has gone up, and Congress extended a 30 percent federal tax credit for installing them...All of this means solar panels can now pay for themselves in as little as five years, depending on where you live.”

1. Do I have to use my roof? Can solar panels be installed elsewhere?

The rooftop is the obvious choice, but solar panels can also be installed in many other places. After the roof, the most popular place to put solar panels is on the ground in your backyard. These are called ground-mounted solar panels. They have higher installation costs, but it’s also easier to optimize them for higher output.

Other options include solar carports and canopies, as well as solar pergolas, solar gazebos and solar patio covers. Basically, any place with a flat surface can have solar panels installed on it!

The average residential solar system in the United States requires a total of 400 square feet. This is assuming a 6 kilowatt-hour (kW) system - the average size for home installations over 2018 - running 23 solar panels with a typical 265-watt output. Of course, there are many variables that can affect this number. A more detailed explanation is available here: How many square feet of roof space is needed for solar panels? Alternately, use this solar panel roof space calculator to get an estimate for your own home.

Your solar system will last between 25-30 years, so your roof should be able to last that long, too. If your roof needs replacing soon, it might be better to replace your roof first or look at other places to put the panels.

4. Which direction should my roof slant/face?

In the northern hemisphere — which is where the US lies —the sun moves across the sky towards the south. Because of this, south-facing panels will receive the most direct sunlight and deliver the highest output. That being said, solar panels don’t have to face south to be worthwhile. Panels that face east or west only result in output drops off one-fifth or less. Panels facing north are the least desirable but in many cases can still save homeowners money.

5. What is ‘net metering’ and how will it affect me?

When you install a solar system, it often generates more energy than you need. If your home is net-metered, your surplus energy can be returned to your electric company (‘the grid’). The utility then credits you for the surplus energy you’ve returned. Your remaining electric bill reflects the energy use generated by your electric company minus the energy you added to the grid. This allows you to dramatically reduce or even completely eliminate your power bills!

Thanks to net metering, surplus energy you produce during the day and over the summer doesn’t go to waste. Instead, the value of it gets stored and is used to cancel out your remaining bills.

Solar power systems harness the sun’s energy and makes it usable. The concept behind them is not new; humans have been using solar power for eons. It’s easy to see why: the sun is an inexhaustible and powerful source of energy. In fact, it is the most abundant source of renewable energy in the world. Harnessing it appears to be a natural, simple, and sustainable way to create electricity.

Of course, the modern process of creating electricity from sunlight is not that straightforward. We call it a ‘technology’ because a great deal of time and research went into developing the modern solar systems we have today. In fact, until recently it wasn’t clear that solar energy could be a viable way to produce electricity on a mass scale. However, doubts about solar have now been put to rest by rapid and ongoing improvements in technology and manufacturing efficiency. Between just 2010 and 2018, the cost of solar panels fell an astounding 70%.

Solar panels are now competitive with - or cheaper than - traditional electricity sources.  As a result, the U.S. is now adding more solar power than any other type of electricity. In 2018, solar accounted for 55% of all electricity added that year.

The future of solar panels

As solar panel technology improves and costs continue to drop, solar will play an ever bigger part of our lives. Read about all the future applications of solar in this article: Why our future will be solar powered.