What is the best solar battery for your home? 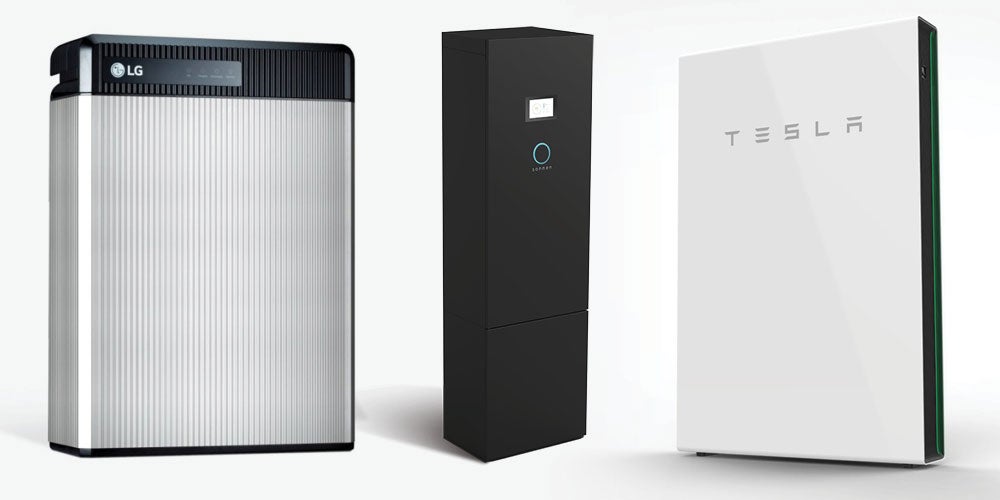 Solar batteries provide significant benefits, such as energy independence and emergency backup power. But it can be difficult to know exactly what to look for when shopping for a solar battery.

In this blog, we break down everything you need to know about solar batteries to help you pick the right one for your home.

What is a solar battery?

Solar panels make more electricity during the middle of the day than they do at any other time.

The middle of the day also happens to be when most homes use the least amount of energy. Because of this, your solar panels will produce a lot of electricity that your home won’t need at that time.

Solar batteries are able to store that extra solar energy that was created in the afternoon so you can use it later in the day. This lets you power your home on clean renewable energy from your solar panels, even when your panels aren’t producing electricity.

Solar home energy storage also allows you to be less reliant on the grid - meaning lower electricity bills and access to reliable backup power when the grid is down.

How much do solar batteries cost in 2021?

Lithium-ion batteries beat lead-acid in all of those categories. But, lithium-ion batteries come at a higher price. The good news is that the price for lithium ion solar batteries has continued to fall over the years. They have quickly become the most popular energy storage options for grid-tied solar systems.

The following table lists some popular solar batteries on the market:

Features to look for when shopping for solar battery storage

There are 4 key features to consider when looking to buy a solar battery: the power and capacity ratings, the depth of discharge, the efficiency rating, and the warranty.

Let’s take a closer look at each of these terms and what they mean.

The first two things you need to look at when purchasing solar battery storage is its capacity rating and the power rating.

The capacity rating tells you how many kilowatt-hours (kWh) of electricity a solar battery can hold. This represents the actual supply of (or how much) electricity you have stored in your battery.

The capacity rating isn’t very useful on its own. You also have to consider the power rating of a battery. The power rating tells you how much electricity a battery can deliver to your home at one time, measured in kilowatts. This will give you an idea of how many appliances you can power in your home with a solar battery.

Batteries with a high capacity and a low power rating are useful as emergency backup generators, as they can power a few important appliances, like a refrigerator or a washing machine, for a prolonged period of time.

A battery with a low capacity and a high power rating will be able to power the whole house, but only for a few hours because there is less electricity stored in the battery.

Higher DoD ratings allow you to use more of the energy stored in your solar battery before you have to recharge it.

For example, let’s say you have a solar battery with a 10 kWh capacity and a recommended DoD of 60%. This means you shouldn’t use more than 6 kWh of electricity before you recharge it. Using any more than 6 kWh could damage the battery.

A solar battery’s warranty will give you an idea of how long the battery should last. Most solar home batteries are believed to have a battery life of at least 10 years with regular use.

Solar battery manufacturers usually measure warranties in terms of ‘cycles’. A cycle occurs when your battery fully charges and then drains to the recommended DoD. Each time a battery cycle is completed, the battery’s ability to hold a charge decreases.

For example, the sonnen ecoLinx battery warranty guarantees it will operate at 70% of its original storage capacity after 10 years or 10,000 cycles - whichever comes first. If you use the battery to power your home daily, it’s likely you will reach 10,000 cycles before 10 years have passed.

But, if you only use the battery for emergency power backup, you could reach 10 years before you hit 10,000 cycles.

Are there different types of solar batteries?

There are two types of lead acid batteries:

Lead acid batteries have a low DoD, usually around 50%, so they need to be recharged more frequently to operate properly. This also impacts the battery’s lifespan - which is usually between 5 and 10 years for lead acid batteries. This means you’ll have to replace a lead acid battery bank more often than you will with other battery types.

Lead acid batteries are the best batteries for DIY and off-grid solar systems.

Learn more: Should you choose a lead acid battery for solar storage?

Lithium-ion batteries are a new type of deep-cycle battery technology. However, they have quickly become the favorite solar energy storage option among homeowners for a few reasons.

One being that they are smaller and lighter than lead acid batteries, so they take up much less space for the same amount of capacity. They also tend to have a longer lifespan, usually with a minimum of 10 years.

Lithium-ion batteries’ longer lifespan is partially due to the fact that they have a higher DoD, so the battery can be depleted further than a lead acid battery before it needs to be recharged. Many popular lithium-ion solar batteries have DoD’s of 90% or higher.

If your battery is installed properly, the chances of it catch on fire is almost zero.

Installing a solar battery can be a great way to get the most value out of your solar panel system. They are an excellent source of backup power, can make you less reliant on the grid, and in some cases can save you even more money on your electric bill.

However, solar battery systems do come at a price. If you’re looking to save money, installing a solar battery might not be right for you, especially if your utility offers net metering. However, if you live in an area that experiences regular blackouts or somewhere with time-of-use utility rates, having a battery backup could be beneficial.

The upside is that the price of solar batteries continues to fall, so it is possible that all solar power systems in the future will be installed with storage. If you’re looking to pair your solar panels with battery storage, make sure you contact multiple reputable battery storage installers to ensure you get the highest quality installation at the best possible price.

What are solar panels, how do they work? Solar panels use silicon solar cells to convert the sun’s energy into usable electricity through the photovoltaic effect.

The Tesla solar roof has changed over the years. What’s the latest solar roof news and is it worth the cost? The answer may surprise you!