Recycling solar panels: What happens when they no longer work?

Solar panels are made to last, but solar panel recycling is still an important topic.

Barring damage from natural disasters or accidents, modern solar panels have an expected lifetime of 30 years or more. Some of the first commercially-available panels have crossed that milestone and are still operating almost as well as they did when new.

Nearly all solar panels in the world were installed after 2009, and come with a guarantee that they’ll produce at least 80% of their rated power output after 25 years. Most panels on the market will do better than that, producing about 85% of their rated output after 30 or 35 years.

What will we do with old solar panels?

Humanity has a two- or three-decade runway to learn how best to deal with solar panels at the end of their useful life, but by 2050, it’s expected solar panels will account for 60 million tons of waste. Recycling all the materials that go into making them is essential, because those 60 million tons of panels will represent nearly $16 billion in valuable resources, and some materials used are potentially toxic if discarded in a landfill.

We have the perfect proving ground: as production of solar panels ramps up, there will inevitably be a need to recycle broken panels, duds, and panels destroyed by natural disasters. Now is the time for governments and the industry to set the standards for recycling the panels that can be used as the amount of solar waste increases in the coming decades.

What solar panels are made of

The vast majority (over 90%) of solar panels that have been sold are made with crystalline silicon solar cells. These “c-Si” solar panels are what you might think of when you think of solar. The layers include a frame made from aluminum, low-iron glass that covers the whole panel, crystalline-silicon solar cells sandwiched between two layers of EVA encapsulant (a plastic material), and a backsheet made of polyvinyl fluoride that provides extra protection from moisture, UV light, and temperature fluctuations.

Here’s an image that shows the layers that go into a typical c-Si panel is made: 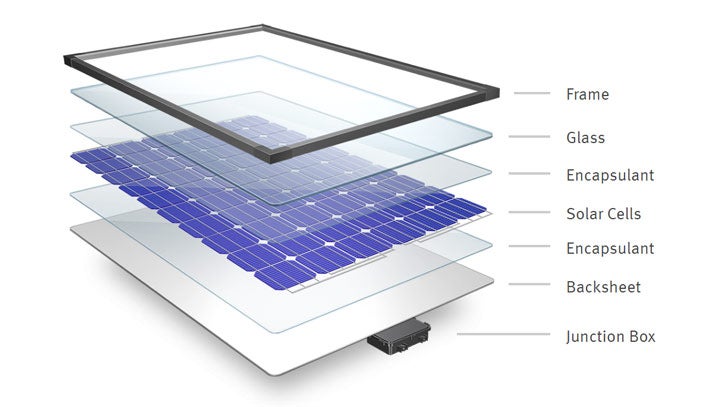 The layers are fairly simple, and when combined together using heat to seal the encapsulant and bond it to the glass, form a very sturdy panel; built to last.

Tests called “toxicity characterization leaching procedure” tests (TCLP), are done to check for toxic chemicals that can leach into the environment from waste disposal. Studies that collect the results of these tests have shown (PDF links) that the panels have the potential to leach minimal amounts of lead, chromium, and barium, spread among the various components.

There’s no need to throw these things away, though. Solar panels are made up of valuable materials that can mostly be recaptured, and the industry has committed itself to discover the best way to recycle solar panels and either re-use or re-sell the components.

How much material can solar panel recycling recover?

Most materials that go into making a c-Si solar panel can be reclaimed through recycling processes. In the United States, the law that governs solar panel disposal is called the Resource Conservation and Recovery Act (RCRA), which applies to all solid waste.

Under the RCRA, it is currently legal to simply throw away solar panels like normal garbage, provided they’ve passed the aforementioned TCLP test. But again, the materials used to make the panels are valuable, so it behooves the industry to figure out how to reclaim the components for future use.

As is normal for most things related to environmental well-being, European regulators are leading they way, and have developed a set of standards for recycling solar panels, requiring manufacturers to take back their panels at the end of their lives at no charge to the owners, and send them to a recycling facility where the components are broken down, sorted, and re-sold to make new solar panels and other products.

Here’s a look at the current state of solar panel recycling, and a little about the future:

This infographic was produced in 2017 by GreenMatch, a UK-based provider of quotes for green energy products from multiple providers.

Manufacturers that recycle their own solar panels

Following the EU regulations, some solar companies across the world, including First Solar and SolarWorld, began their own reclamation programs in order to streamline the process as waste increases into the future.

First Solar has its own proprietary process for reclaiming its cadmium telluride (CdTe) thin film solar panels, which results in 95% of the semiconductor material and 90% of the glass available for reuse, either in new solar panels or other products. The company makes the recycling service available to its customers as part of its sales and service process. Recycling costs extra, unfortunately.

To perform the recycling, First Solar takes panels back from its customers, then puts them through a process that involves shredding, crushing, and treating the panels with a liquid process that helps to separate the component parts. Glass and laminate are separated and reclaimed in one process, and the resulting metal slurry is sent to a third party, who performs a process that results in separate cadmium and tellurium products.

Here’s a look at how that works: 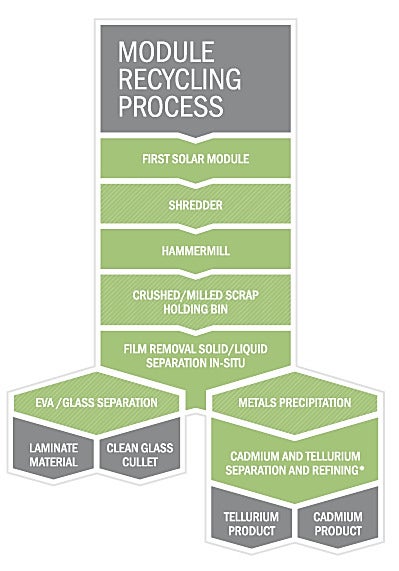 In Europe, regulations require manufacturers of solar panels to be responsible for the recycling of the products they sell. To make that process run smoothly, PV Cycle was set up as a non-profit membership organization by the solar industry, to help solar manufacturers meet compliance with EU regulations.

PV Cycle developed a process that enables them to recover 96% of the materials used to make solar panels, with the leftover 4% mostly made up of glass coatings and the EVA encapsulant material, which is sent to a waste-to-energy plant and burned to produce energy.

Solar Recycling in the United States

In the US, where there are no current laws specifically governing the recycling of solar panels, the Solar Energy Industries of America (SEIA) developed a recycling program, and identified three partners that can accept solar panels for recycling.

The trouble is, without further regulations, the solar industry has no specific impetus to develop improved recycling methods. The currently-available methods are quite expensive, and although the European methods will continue to be improved as the scale of solar waste increases, our friends across the pond could use some help developing these methods.