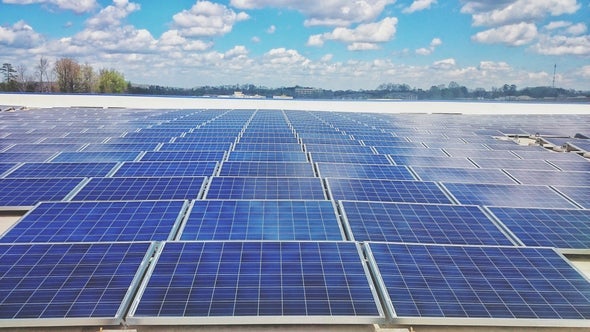 Solar panels, or photovoltaic (PV) panels, convert solar energy from the sun into usable electricity. The photovoltaic effect, or the ability to generate electricity from sunlight through electrons, was first observed in the late 1800’s, which then led to the invention of the first solar cell by Charles Fritts.

However, it was not until 1954 that solar cells were developed, which led to the creation of solar panels that were built from multiple solar cells.

Solar panel modules were not commercially viable or truly efficient at absorbing and generating a usable amount of electricity until after the invention of high-silicon PV panels in 1954 at Bell Labs. Since then, solar has evolved to become one of the cheapest forms of clean energy available, and it continues to increase in popularity.

The most important component of a solar panel is the solar cell. Solar cells convert sunlight into electricity through the photovoltaic effect, hence the name photovoltaic, or PV, panels.

Solar cells are made up of the semiconductor crystalline, silicon. Silicon is photovoltaic, meaning it is a substance that reacts when exposed to light, and in this case, the reaction generates electricity.

When exposed to sunlight, solar cells generate an electric current. Direct current, also referred to as DC electricity, is then converted to usable alternating current (AC) electricity through an inverter. This AC electricity is what powers your home, and is either used immediately, stored in your solar battery for future use, or sent back to the electrical grid for bill credits through a program called net metering.

What do solar systems consist of?

Aside from the solar panel itself, the key components of a solar energy system are the racking system and the inverter.

Racking systems can either be ground-mounted, as pictured above, or mounted on your roof, which is most common.

Racking and mounting systems are what holds the solar panels in place. There are even options that can track the sun to absorb as much sunlight as possible, although these cost substantially more.

For more details, check out our guide to solar panel mounts.

Inverters create usable electricity from each solar panel. In other words, an inverter is what converts the DC energy generated by the solar panels into usable AC electricity for your home.

An inverter has three main roles:

The inverter is the key part of your solar PV system; your home would not be able to use the power produced by solar panels without it. Learn more about inverters, as well as the key differences between microinverters and string inverters, here.

Working with your solar installer can help you determine which racking and inverter types make the most sense for your specific solar system.

What are the benefits of solar panels?

One of the biggest advantages to solar power systems, and why a lot of homeowners choose to install solar panels, is because of the money it saves you, versus paying a utility company for electricity. In many cases, once solar panels are installed and paid for, they can reduce your electricity bill to zero.

You can even earn money with solar through net metering. If your solar panels produce more electricity than your home uses, some utilities will pay you for it. Some net metering programs are better than others, but if your utility offers it - or some version of it - it will cut down your solar panel payback period.

Another big draw is their environmental benefit. Powering your home with solar reduces greenhouse gas emissions and reduces pollution that would otherwise be emitted from fossil fuel plants.

A house with solar panels can also be worth more than one without them. People are attracted to the reduced electricity bills and energy independence that solar panels can provide. So if your solar system is fully owned by you, that can increase the value of your home.

How much do solar panels cost, and where can I buy them?

The cost of solar panels can fluctuate depending on local contractor costs, availability of supply, and even things like tariffs.

But as of August 2022, you can expect the average cost of solar panels to be $3.00 per watt, which would bring the average cost of a 7 kW system to $21,000. Once you factor in the 30% federal solar tax credit, that price falls to $14,700. Some other incentives can vary locally and include things like rebates or state tax credits. Check out what’s available in your state.

Some other incentives can vary locally and include things like rebates or state tax credits. Check out what’s available in your state.

The best place to buy solar panels is from a local installer. Local installers can manage the ins and outs of local paperwork and requirements, and are also more likely to be around for you if your solar system ever has issues or needs maintenance.

Local installers are not always necessarily the cheapest way to go solar, but they are more likely to be reliable than large-scale solar companies.

You can use our solar panel cost and savings calculator to shop around for quotes from vetted local installers so you can determine the cost of going solar for your exact home.

Solar panels are a key part of the future of energy

Solar power is projected to be a key part of the renewable energy mix for the United States as solar technologies become increasingly advanced, and it will continue to help reduce emissions from fossil fuel plants by diversifying energy production.