What is half-cut solar cell technology? 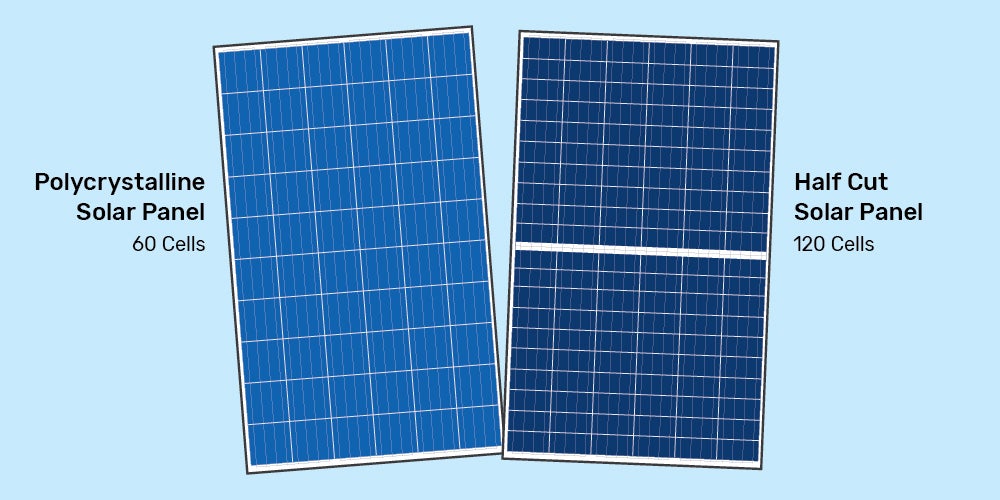 Half-cut solar photovoltaic cells were pioneered by REC Solar in 2014 and were designed to increase the energy output of solar panels. We will detail more about how they work below, but you can think of a half-cut cell as two separate panels in one.

In this article, we will explain how half-cut solar PV modules work, why their design improves the performance of standard solar panels, which manufacturers use them, and the potential future of half-cut solar cell technology.

How do half-cut solar cells work?

Half-cut solar cell technology increases the energy output of solar panels by reducing the size of the cells, so more can fit on the panel. The panel is then split in half so the top operates independently of the bottom, which means more energy is created - even if one half is shaded.

That’s the general overview - below, we break the process down.

Traditional monocrystalline solar panels usually have 60 to 72 solar cells, so when those cells are cut in half, the number of cells increases. Half-cut panels have 120 to 144 cells and are usually made with PERC technology, which offers higher module efficiency.

The cells are cut in half, very delicately, with a laser. By cutting these cells in half, the current within the cells is also halved, which essentially means that resistive losses from traveling energy via current are reduced, which, in turn, equals better performance.

Since the solar cells are cut in half, and are thereby reduced in size, they have more cells on the panel than traditional panels do. The panel itself is then split in half so that the top and bottom portions operate as two separate panels - generating energy even if one half is shaded.

The key to half-cut cell design is a different method of “series wiring” for the panel, or the way the solar cells are wired together and pass electricity through a bypass diode within a panel. The bypass diode, indicated by the red line in the images below, carries the electricity that the cells generate to the junction box.

In a traditional panel, when one cell is shaded or faulty and does not process energy, the entire row that is within the series wiring will stop producing power.

For example, let’s take a look at the traditional 3-string series wiring method:

With the traditional full cell string series wiring, shown above, if a solar cell in Row 1 does not have ample sunlight, every cell within that series will not produce energy. This knocks out a third of the panel.

If a solar cell in Row 1 is shaded, the cells within that row (and that row only) will stop producing power. Row 4 will continue to produce power, generating more energy than a traditional series wiring because only one-sixth of the panel has stopped producing power, instead of one-third.

You can also see that the panel itself is split in half, so there are 6 total cell groups instead of 3. The bypass diode connects in the middle of the panel, instead of on one side like the traditional wiring above.

What are the advantages of half-cut cells?

The advantages of half-cut cell panels are numerous.

They improve the power output and performance of solar modules because they offer a higher shade tolerance due to their unique wiring system. This means that if your home has some trees that cast shade onto your roof at certain times during the day, your entire solar panel will not be unusable, like it would with a traditional solar panel.

Another benefit is the fact that they usually offer a higher wattage than traditional panels, even up to 380 watts for the REC Alpha versus traditional panels which are typically within the 250-watt range, meaning they produce more power per square foot.

Additionally, the effects of hot spots are less severe on your solar panels with half-cut cells. Hot spots are the shifting of excess heat on a panel, say from a very hot part to the shaded, cooler section. With a half-cut cell, hot spots will not be as damaging because there are more cells to spread the excess heat to.

Half-cut cells also reduce power loss suffered by traditional panels by reducing internal resistance. Internal series resistance occurs just by the nature of energy traveling through the panel via electric current. But because solar cells are cut in half, there is less current generated from each cell, meaning less resistive losses.

Although half-cut cells offer many advantages, they are more expensive because they are more challenging to manufacture, with increased soldering steps and laser cutting. Ultimately, it is up to you to decide if the overall benefits make the increased cost worth it.

What manufacturers use half-cut cell modules?

If you are interested in half-cut cell solar panels, work with your installer to find the best option for your specific roof’s solar installation. Whichever option you choose, traditional versus half-cut, going with a reputable manufacturer and trustworthy local installers is your best option.

Are half-cut panels the future of solar?

Half-cut cells are really great for improving the solar power energy yield of panels, but they are more challenging to manufacture. This makes it hard for traditional manufacturers to switch to producing half-cell solar modules, it is not as simple as just adding half-cut cells to a production line.

In many cases, traditional solar panels can still work for you, like if your roof has ample sunlight throughout the day.

But if you need every ounce of energy you can get because you live in a shady area or you want to maximize your net metering benefits, half-cut cells make sense. Ask for half-cut cells if you have a small surface area that needs to generate all the solar power it can. Otherwise, you should be fine with traditional panels even if you might need a few more of them on your roof.

Perhaps when the manufacturing of half-cut cells becomes more streamlined and easier to adopt, they will become cheaper and more widespread. Your solar installer will help you decide if half-cut cells are the right choice for your rooftop solar array.