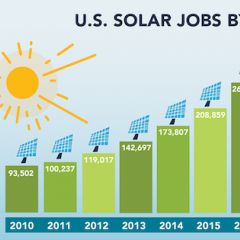 Last week two reports came out showing interesting news on the state of clean energy in the US. One report showed that solar jobs are falling, while another showed that carbon emissions increased last year, even as the country’s energy infrastructure is cleaner than ever. Moves in Oregon and Illinois will ensure more clean energy comes online, too.

The Solar Foundation, in its annual National Solar Jobs Census, found the number of people employed by the solar industry fell to 242,343 people in 2018 from a high of 260,077 people at the end of 2016. It’s the second year in a row that jobs fell in the industry. The organization cited the impact of Trump’s import tariffs on the industry. However, the report also anticipated that jobs in the industry will recover somewhat in 2019.

With 53 percent of the US’s electricity coming from clean energy, the US’s energy infrastructure is cleaner than ever, according to the annual 2019 Sustainable Energy in America Factbook published by BloombergNEF (BNEF) and the Business Council for Sustainable Energy (BCSE). However, the US consumed more energy than in previous years thanks to economic growth and weather conditions.

In Oregon, a new project would comprise a first. The project would by the first giant project to combine wind power, solar power and large energy storage. The project being developed by Portland General Electric Co. and NextEra Energy would consist of 300 megawatts of wind power, 50 MWs of solar power and 30 MWs of batteries for energy storage. Once completed the utility will source roughly 50 percent of its power from renewable energy.