Salesforce has achieved net-zero greenhouse gas emissions and avoided 2 million metric tons of carbon emissions during 2016. The company signed two, 12-year power purchase agreements for a combined 64 megawatts of wind power and integrated energy efficiency measures into the design of its operations and facilities. In addition, the company is offsetting its indirect emissions by purchasing carbon credits and has applying them to supporting sustainable development projects around the world.

“Reaching net-zero quickly is critical to addressing the effects of climate change,” said Suzanne DiBianca, Salesforce executive vice president. “Climate change affects everyone and every organization, but especially the young, old, sick and less fortunate. The carbon offset projects we have chosen create both economic opportunity and positive environmental impact to make a difference in the future of our planet and communities around the world.” 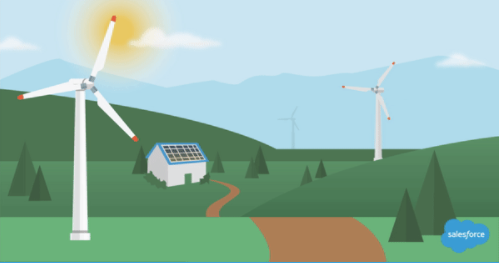 Salesforce was able to chose which sustainability projects to support with its carbon credit offset program. The projects were evaluated by how each will impact local environments, job markets and communities’ well-being beyond the project’s development.

Salesforce said that its cloud based storage platform is 50 percent more energy efficient than if customers stored data onsite themselves. Its multi-tenancy data storage is powered by renewable sources and delivers carbon neutral services to its customers. It reduces the environmental impacts of everything from manufacturing new computers and servers because customers need less equipment.

The company also joined the The B Team, a nonprofit consortium of business leaders from around the world. ”The B Team congratulates Salesforce on achieving net-zero so far ahead of the Net Zero 2050 commitment," said Leah Seligmann, director of The B Team's Net Zero by 2050 initiative. "Salesforce’s leadership will enable their customers to expand their networks emissions free and inspire other companies around the world."

The company is currently supporting projects in India which provide homes, businesses and public institutions with hot water heated with solar rather than fossil-fuel burning sources. Additionally, it is involved in a project called Proyecto Mirado, which replaces open wood-burning cooking stoves with energy efficient stoves throughout Honduras. Each high-efficiency stove reduces carbon emissions by 15 metric tons over its 5-year life, increases the health of the community and decreases deforestation in rural areas, according to Saleforce.