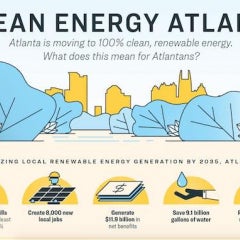 Earlier this week Atlanta’s city council unanimously approved the “Clean Energy Atlanta” plan to transition the city to 100 percent renewable energy. The plan will also lower electric costs for residents by at least 25 percent and up to 95 percent for some residents, while creating 8,000 new jobs, the council said.

To ensure the new plan benefits all Atlantans, the plan will create an equitable community-solar program, adopt stronger solar and efficiency building codes, and deploy large-scale solar on municipal property. It will also adopt renewable energy and car-sharing programs for low-income residents and expand electric vehicle charging infrastructure across the state, among other efforts. 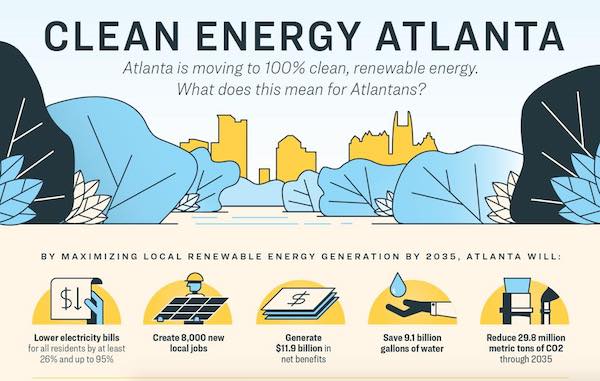 “The City of Atlanta’s adoption of its 100% Clean Energy Plan is a bold step by the City’s leadership to improve the lives of all Atlantans,” said Amol Naik, Chief Resilience Officer of the Atlanta Mayor’s Office of Resilience. “This commitment to 100% clean energy by 2035 places Atlanta at the forefront of American cities. Atlanta’s clean energy vision will advance some of the City’s most critical goals, from improving affordability by decreasing energy bills, to creating jobs, improving air quality and public health, and stimulating economic development. Atlanta is a growing city, and this pledge to a clean energy future will help the city continue to thrive, and lead, in an equitable and sustainable manner.”

The approval of the new plan follows the May 2017 declaration by the city of Atlanta that it would transition to renewable energy by 2035 and builds on it by creating the transition plan. It also requires that the city’s municipal operations will be powered by renewables when the rest of the city is.

The new plan from the city won the support of the The Sierra Club, among others. The organization launched the Ready for 100 campaign and the Mayors For 100 percent Clean Energy campaign.

“As Atlanta and other communities across Georgia plan their transition to 100 percent clean energy, the Georgia Public Service Commission and Georgia Power must respond to customer demand and build this renewable capacity. The current Integrated Resource Plan is the best place to start,” said Ted Terry, director of the Georgia Sierra Club. “The Sierra Club joins Atlantans in calling for an equitable clean energy transition that works for everyone. We look forward to continuing to work with the City of Atlanta Mayor’s Office of Resilience and other cities across the state to ensure community priorities for a clean energy future are actualized.”