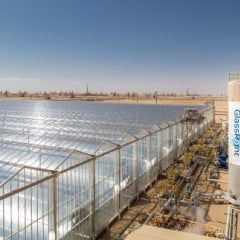 It might sound odd that a solar power company is focussed on oil and gas extraction, but that’s what GlassPoint Solar is focussed on and now it’s been named one of World Economic Forum’s Technology Pioneers. The company has developed a method for using low-cost steam to extract oil and gas sustainably with solar power.

The World Economic Forum started the Technology Pioneers program in 2000 to recognize companies that can change business and society with new technologies. It selected GlassPoint among its category for transformative solutions across IT, health, energy, environment, food and financial services sectors. 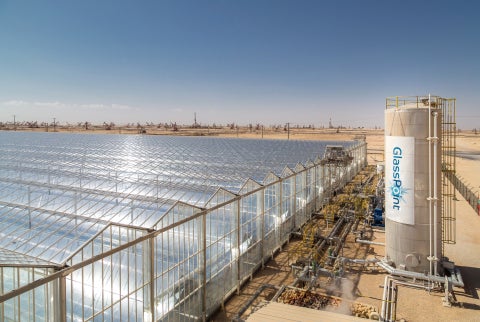 “We welcome GlassPoint to this extraordinary group of pioneers. They are among a list of companies that are helping to shape the Fourth Industrial Revolution, a technological revolution that will fundamentally alter the way we live, work and relate to one another,” said Fulvia Montresor, head of Technology Pioneers at the World Economic Forum. “Through the platform of the World Economic Forum, they will be able to scale and share their technology in order to achieve a larger impact.”

GlassPoint won the award for its solar thermal steam generators, which use inexpensive technologies to extract heavy oil by concentrating sunlight. In doing so the technology replaces the use of natural gas to produce thermal energy used to produce steam, reducing the amount of fossil fuels and carbon dioxide (CO2) produced in, well producing fossil fuels.

For instance, GlassPoint is building the 1 gigawatt Miraah project in Oman, producing 6,000 tons of steam daily. It will reduce the project’s emissions impact by 300,000 tons of CO2 annually. That’s the equivalent of removing 63,000 cars from the road. It also will stop the project from burning 5.6 trillion British Thermal units (BTUs) of natural gas annually. That saved gas will instead be exported as liquefied natural gas (LNG) for power generation or private sector use like heating or cooking.

“It is an honor to be recognized and included alongside some of the most innovative companies in the world,” said GlassPoint President and Chief Executive Rod MacGregor. Other companies that were recognized by the forum with the prize include Google, Airbnb and Twitter, for instance.

“This recognition further substantiates the increasing convergence between traditional and renewable energy,” MacGregor said. “Our solar technology was specifically designed to meet the needs of one of the world’s largest consumers of energy—the oil and gas industry itself. By integrating alternative energy and traditional energy, the world can benefit from substantial carbon savings while deploying renewable energy at unprecedented scale.”