In the wake of Trump pulling out of the international Paris Agreement on climate change states are taking actions in the absence of federal leadership to reaffirm their commitment to renewable, clean energy and reduced emissions. Case in point, on Monday (June 5) California Gov. Edmund Brown Jr. (D) signed an agreement with California's sister state, Jiangsu Province, to to broaden bilateral collaboration on climate action.

Brown signed the agreement with Jiangsu Party Secretary Li Qiang. It will expand cooperation on clean energy technology. It will focus on advancing energy efficiency and storage, renewable energy, grid modernization, zero-emission vehicles and low-carbon urban development, according to Brown’s office. The agreement also established the California-Jiangsu Clean Tech Innovation Center in Jiangsu and the development of a California-China Clean Technology Partnership Fund to help spur innovation and investment in clean technology. 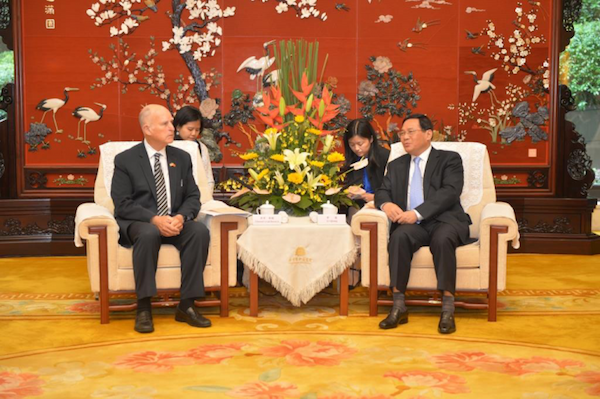 "The challenges are big but so too is the commitment—the commitment of Jiangsu Province with California and China with the people of America. We're going to get it done. Nothing will stop us," Brown said. "Green is not only gold, green is our future—China, California and America and the other countries of the world all working for the prosperity of the people." To that end the California legislature recently passed three bills to transition the state to 100 percent renewable energy and make it easier to install solar and energy storage.

Over the next few days Brown and other international leaders will participate in the Under2 Clean Energy Forum with China's Ministry of Science and Technology and Sichuan Province and participate in Clean Energy Ministerial events. The Under2 Coalition is an international pact signed by cities, states and countries aimed at limiting the increase in global average temperature to below 2 degrees Celsius. The Clean Energy Ministerial is an annual meeting of energy ministers and delegates from nearly two dozen countries.

The Under2 Coalition represents 16 percent of the global population and 37 percent of the global economy. Already 10 US states and eight US representing nearly one-third of America's population and gross domestic product. The moves build on the formation of the United States Climate Alliance, a coalition launched by California, New York and Washington state of states committed to upholding the Paris Agreement.