Thanks to solar’s resiliency, falling prices and ability to help out in disasters, New York is anticipating more solar installed in 2013 than ever before in the Empire state and in New York City. That’s based on experts who discussed the “Tipping Point for Solar in New York” at the City University of New York (CUNY), which held the seventh annual NYC Solar Summit last week.

"When Governor Cuomo unveiled his NY-Sun Initiative at the beginning of 2012, he made increasing solar power a major initiative for the state,” Francis Murray, president and CEO of the New York State Energy Research & Development Authority (NYSERDA). “Since then, we've seen more solar installations installed or under development than in the entire prior decade." 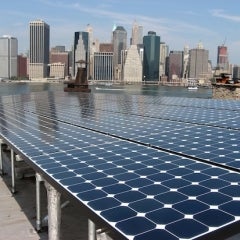 “In 2012, the NYC solar market grew by 85 percent over the previous year and is projected to continue on a rapid upward trajectory based on the significant number of new PV applications that were filed so far in 2013,” according to CUNY. With the new applications filed, it looks like the state is on its way to meet Gov. Andrew Cuomo’s (D) NY-Sun Initiative. The initiative, launched in 2011, aimed to install twice the customer-sited distributed solar photovoltaic (PV) power added 2011 and seeks to quadruple that in 2013. “We are enabling the sustainable development of a robust solar industry, creating clean energy jobs, improving electric reliability and reducing air pollution through stable and dependable funding of $150 million per year for the next ten years,” said Richard Kauffman, Chairman of Energy and Finance for Cuomo.

Like many states, New York is developing strategies that will help expand the solar market, and these strategies were given extra precedence in the wake of last year’s Hurricane Sandy, which put millions of New Yorkers out of power for days, if not weeks. “CUNY serves as one of NYC's prime partners in its costal storm shelter operations. Where to get power—even enough power to simply charge a phone or a lap top became a prime concern for many in the aftermath of Hurricane Sandy," said CUNY Director of Sustainability Tria Case.

CUNY formed the Smart Distributed Generation Hub (DG) by partnering with federal, state and city agencies to implement changes that can utilize solar power and other distributed generation as resilient resources during emergencies, Case said. While most residential and commercial PV systems are grid-tied and currently shut down when the grid goes down for safety reasons, these power sources (along with new technologies) can be re-routed for emergency purposes, like powering hospitals, when other major power sources are unable to.

One of the key issues the state is focusing on is simplifying permitting and regulatory issues. “The average cost of installing solar in New York State in 2012 was $5.79 per watt. However, county averages deviate from that average by up to 40 percent due to in part to the lack of a unified permitting process, financial options, or marketing and data analysis tools across many of the municipalities,” CUNY said.

To bring those costs down and simplify the process, CUNY discussed the NYSolar Smart program, part of the NY-Sun Initiative that builds on New York City’s successes. Among those efforts, the state will not only streamline permitting, but expand the use of tools like a New York State Solar Map, based on the NYC solar map.