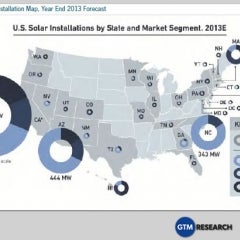 This morning (Dec. 10) as GTM Research began hosting the U.S. Solar Market Insight Conference in San Diego it, along with SEIA, released the U.S. Solar Market Insight: 3rd Quarter 2013 report. The report found that the third quarter of 2013 was the second best quarter for solar in the U.S. ever, with 930 megawatts of photovoltaics installed. Moreover it was the biggest quarter ever for residential solar with 186 megawatts of solar installed on rooftops across the country. 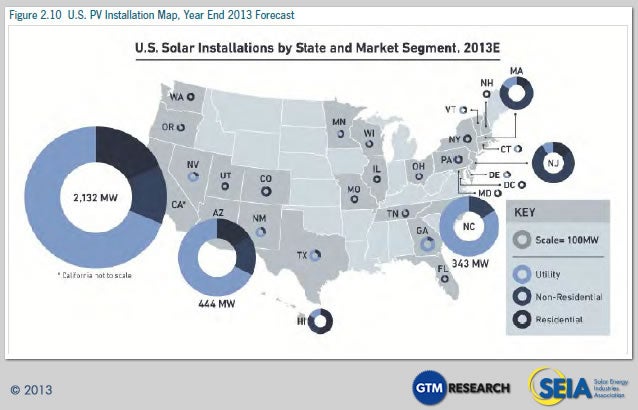 Solar also has become an increasingly large part of all new energy production in the U.S. In introducing the conference GTM Vice President of Research Shayle Kann said that in 2012 solar was the fourth largest behind natural gas and coal. “In 2013 the wind market is down, the coal market is down, the solar market is up,” he said. With that solar power has become the second largest source of new electric capacity in the U.S., Kann added.

Kann also noted that it’s first time in 15 years when more solar will be installed in the U.S. than in Germany, which has been the world leader for solar for years. He also anticipated that solar will continue to be one of the largest new energy sectors in the U.S.

“Without a doubt, 2013 will go down as a record-shattering year for the U.S. solar industry,” said SEIA President Rhone Resch. “We’ve now joined Germany, China and Japan as worldwide leaders when it comes to the installation of new solar capacity.” Both China and Japan are also anticipated to surpass Germany in terms of the amount of new solar installed in 2013.

The residential market for solar was an exceptionally bright spot for solar, according to the report. “Through Q3, residential PV installations were up 49% year-over-year and we anticipate further expansion to 52% by the end of Q4,” the report stated. The growth is being driven by increasingly attractive economics and net metering policies. The report also found that the average size of residential PV systems have stabilized around 6 kilowatts.

Overall the report anticipated that by the end of 2013 there will be more than 400,000 solar projects in the U.S. “We forecast that the U.S. will install a total of 4.3 GW of new PV in 2013, up 27 percent over 2012,” the report said—consistent with predictions from earlier in the year. At that point the U.S. will have more than 11 gigawatts of solar power online. 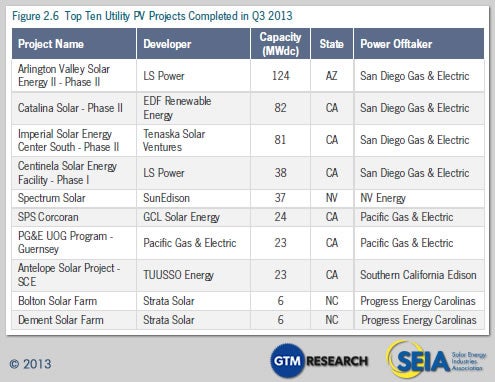