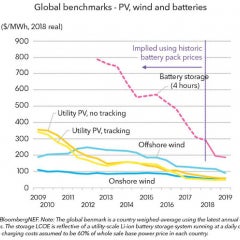 Batteries and energy storage systems have seen a phenomenal cost drops since 2012—falling 76 percent in costs, similar to the trend renewable energy technologies. Now all of them are them are coming into, and beating coal power and even gas power, in terms of providing low cost energy.

That’s according to BloombergNEF’s (BNEF’s) latest analysis, which reaffirms other recent studies, showing how uncompetitive coal is in the US and world. It found that the benchmark levelized cost of electricity, or LCOE, for lithium-ion batteries fell 35 percent in the first half of 2018 to $187 per megawatt-hour—the biggest cost drop in the analysis. The LCOE for offshore wind also fell significantly during the period, dropping by 24 percent. 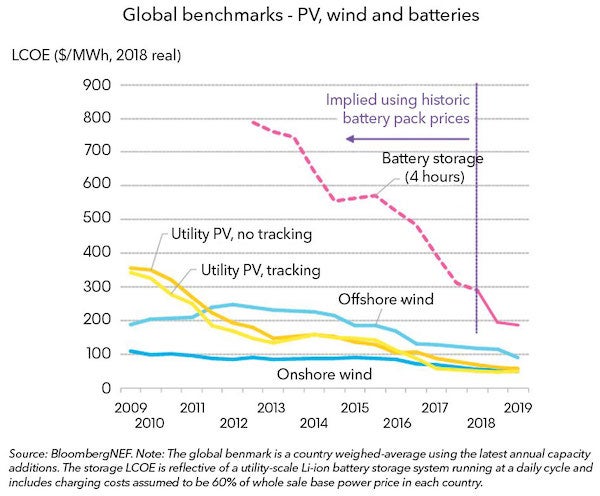 “Looking back over this decade, there have been staggering improvements in the cost-competitiveness of these low-carbon options, thanks to technology innovation, economies of scale, stiff price competition and manufacturing experience,” said Elena Giannakopoulou, head of energy economics at BNEF.

“Our analysis shows that the LCOE per megawatt-hour for onshore wind, solar PV and offshore wind have fallen by 49%, 84% and 56% respectively since 2010. That for lithium-ion battery storage has dropped by 76% since 2012, based on recent project costs and historical battery pack prices,” Giannakopoulou added.

With the price of onshore wind and photovoltaic solar projects now reaching benchmark LCEO prices of $50 and $57 per megawatt-hour, they’ve also fallen 10 percent and 18 percent, respectively, compared to last year. Altogether, BNEF said, the trends are creating opportunities for the combined technologies to balance a renewables-heavy generation mix.

“Solar PV and onshore wind have won the race to be the cheapest sources of new ‘bulk generation’ in most countries, but the encroachment of clean technologies is now going well beyond that, threatening the balancing role that gas-fired plant operators, in particular, have been hoping to play,” said Tifenn Brandily, energy economics analyst at BNEF.

The organization said that energy storage systems combined with solar or wind projects are now starting to compete, “in many markets and without subsidy,” with power from coal or even gas-powered electric plants. In such cases the renewable energy, combined with the energy storage systems are able to provide power on demand at the same price as that from a fossil fuel plant.