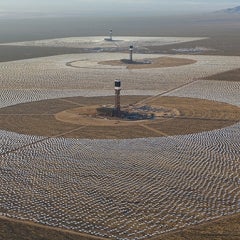 The giant Ivanpah solar electric generating system (SEGS) in the California desert is more than 92 percent complete as BrightSource continues construction on the behemoth concentrating solar power (CSP) system, which generates electricity via a steam turbine. Once complete, its three towers will provide a combined 377 megawatts of solar generation for Southern California Edison and Pacific Gas & Electric under long-term Power Purchase Agreements (PPAs).

When Ivanpah is finished, it will be among the largest solar plants in the world. This solar system will likely be the first major CSP system to come online in the U.S., although SolarReserve’s 110 megawatt (MW) Crescent Dunes Solar Energy Plant located near Tonopah, Nev., also is slated for completion toward the end of 2013. The SolarReserve system has an added component, thermal storage, which will allow it to provide power on par with baseload power from a coal or natural gas-fired power plant. 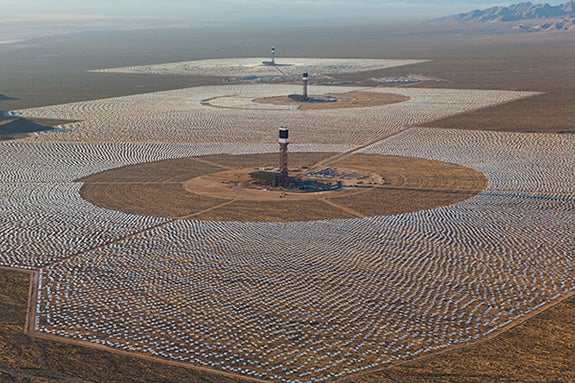 BrightSource is already testing Ivanpah's first unit with steam blows. It is prepping the second unit for steam blows as well, even as it continues to install heliostats at both the second and third units. The steam blows are an important step that allows the heliostats to focus sunlight on the tower and create steam, before connecting the system to a steam turbine. “During steam blows, upwards of thousands of heliostats are focused on the solar boiler to achieve the desired temperatures, pressures and flow rates,” the company says. It adds that the steam blows, which are part of building out any steam turbine generation system, clear debris inside the system pipes, as well as test system integrity and safety.

“Once the steam blows are complete, the team will remove the temporary steam blow piping and reconnect the piping to design conditions. The next step will be for the boiler to admit steam to the steam turbine,” BrightSource says. After the turbine is up and running it will be synchronized and connected to start generating electricity for the grid.