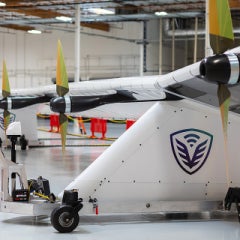 Today (April 25) HAPSMobile introduced HAWK30, a solar-powered unmanned aerial vehicle (UAV) to provide telecommunications abilities from the stratosphere, 65,000 feet above ground. At the same time HAPSMobile announced it is investing $125 million in Alphabet’s Loon and that they formed a strategic partnership to use high altitude pseudo-satellites (HAPS).

Loon was launched by Google in 2013 to use balloons as HAPS to provide Internet services to remote areas of the world. Under the new partnership both companies can utilize each others’ technologies and aircrafts. HAPSMobile also increased the ceiling value of its Design Development Agreement with AeroVironment to $126 million. HAPSMobile is a joint venture between AeroVironment and SoftBank and HAWK30 is its first UAV.

“AeroVironment recently rolled-out the first HAWK30 for our HAPSMobile joint venture, initiating a new phase of our design, development and demonstration program and the promise of a new era for global connectivity,” said Wahid Nawabi, AeroVironment president and chief executive officer. “The result of decades of experience developing and flying solar HAPS, our team designed, developed and assembled the entire HAWK30 in only 24 months. This is very rapid for a HAPS of such large size and significant payload capacity.”

The new UAV has a wingspan of about 260 feet. The solar panels on its wind surface power 10 electric motors. The HAWK30 is designed to fly autonomously for months without landing.

“We are making great progress on this program and look forward to sharing future achievements with our shareholders and potential customers. We are excited to debut our next generation HAPS as we advance this strategically important project for HAPSMobile and for AeroVironment,” Nawabi said.

The new agreement with Loon also includes an opportunity for it to invest the same amount in HAPSMobile. The companies are now exploring commercial collaborations to speed up the deployment of HAPS-based telecommunications and Internet infrastructure, including the deployment of 5G technologies.

“We see joining forces as an opportunity to develop an entire industry, one which holds the promise to bring connectivity to parts of the world no one thought possible. This is the beginning of a long-term relationship based on a shared vision for expanding connectivity to those who need it. We look forward to what the future holds,” said Loon CEO Alastair Westgarth.

“Building a telecommunications network in the stratosphere, which has not been utilized by humankind so far, is uncharted territory and a major challenge for SoftBank. Working with Alphabet’s subsidiary Loon, I’m confident we can accelerate the path toward the realization of utilizing the stratosphere for global networks by pooling our technologies, insights and experience,” said Junichi Miyakawa, CTO of SoftBank and President & CEO of HAPSMobile. “Even in this current era of coming 5G services, we cannot ignore the reality that roughly half of the world’s population is without Internet access. Through HAPS, we aim to eliminate the digital divide and provide people around the world with the innovative network services that they need.”