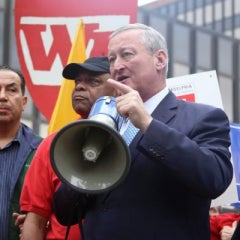 Philadelphia is among the cities that are moving to 100 percent clean energy. Last week it took a major step towards that goal as Philadelphia signed on to get 70 megawatts of its energy from the 70 megawatt Adams Solar farm. In all the power from the project will provide about 22 percent of the electricity used by Philadelphia’s government buildings by 2020.

"This project not only helps Philadelphia demonstrate leadership on climate action, but it also makes good economic sense and helps to boost regional job growth in the renewable energy sector," said Mayor Jim Kenney (D). “We thank Councilwoman Reynolds Brown, the Philadelphia Energy Authority, and Community Energy, Inc. for their partnership in creating this win-win deal for Philadelphians.”

“The City of Philadelphia has set a goal for all City buildings to be powered through renewable electricity by 2030. To achieve this goal, we must analyze the need, investigate the options, make a strategic plan, and then implement it. This Power Purchase Agreement is part of that plan and the result of a thorough procurement process evaluated by the Office of Sustainability and Philadelphia Energy Authority,” Brown said. “Moving forward in a tangible matter with this goal symbolizes how we grow towards a greener and more sustainable Philadelphia.”

Philadelphia aims to get 100 percent of its electricity from clean energy sources by 2030, like other cities have pledged to do. The city will get all of the power from the installation under a low-cost, fixed-price 20-year power purchase agreement with Community Energy’s Adams Solar, which will own the project. To allow the city to purchase the power, Kenney had to sign new legislation into law.

The solar project is the largest to date for the state. It will be built in Adams County by Community Energy, which said the project is seven times larger than the next largest project in the state. Community Energy said that it will use an Economic Opportunity Plan (EOP) in an effort to incorporate minority, women and disabled-person owned businesses into the Adams Solar LLC project.

"The Philadelphia solar commitment demonstrates impressive and much-needed leadership on climate change in Pennsylvania," said Brent Alderfer, Community Energy CEO and co-founder. "As the costs of climate change go up, Philadelphia is showing the way for municipalities to secure reliable, long-term solar power to decarbonize and head off irreversible climate damage."

In signing the PPA for the energy Philadelphia is stepping towards its Ready for 100 commitment to renewable energy. That campaign, organized by The Sierra Club, has seen more than 80 cities of all sizes sign on to support more clean energy development to power all of their electricity needs. Some, like Aspen, CO, have already reached their goals, while many others are still working towards them.