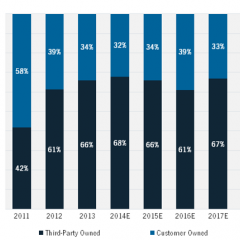 Today the largest part of the solar industry in the U.S. is on the residential solar side. Within the residential solar market the largest part of the market is comprised of third-party ownership (TPO) agreements. In fact, by year’s end 68 percent of all homes with solar will have it through a TPO agreement, according to GTM Research’s new report U.S. Residential Solar Financing, 2014-2018.

The report found that for the first time year-over-year growth in the residential sector of the solar market reached roughly 60 percent in 2013. As such its growth outpaced the overall U.S. solar market, which grew at a rate of 41 percent. The report also found that 2014 will be a year of transition for the solar industry as homeowners will start having more options to finance their solar arrays than ever before. 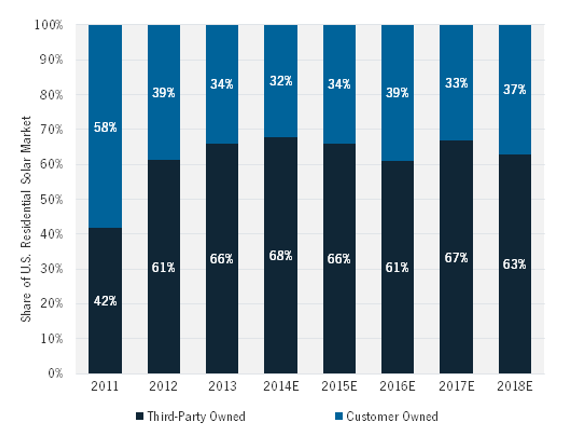 While the rise in TPO of home solar systems under arrangements like those offered by SolarCity and Sunrun is meteoric. It grew from 42 percent of the market in 2011 to 66 percent in 2013. TPO, The financing mechanism where homeowners pay for the power produced by the solar modules while they’re owned by another company, is expected to peak this year, according to the report.

Report author and GTM Research Analyst Nicole Litvak said things are already changing. “Solar loans are becoming widely available with many more options to choose from than in the past, and declining system costs are making direct ownership affordable for more homeowners,” she said. “As a result, the share of third-party-owned solar has already begun to come down in leading state markets, including Arizona and Massachusetts.”

GTM anticipated that TPO arrangements for residential solar will fall to 63 percent by 2018. As TPO financing mechanisms start to take less of the market share other opportunities like solar loans and property-assessed clean energy programs (PACE) will continue to grow.

However, the report also noted that all parts of the residential solar power market will continue to grow. “The residential solar financing market remains just as complex as ever,” Litvak said. “The recent trend has clearly been toward vertical integration—the SolarCity model—but we expect companies such as Clean Power Finance to retain their pure focus on financing and services for smaller installers.”