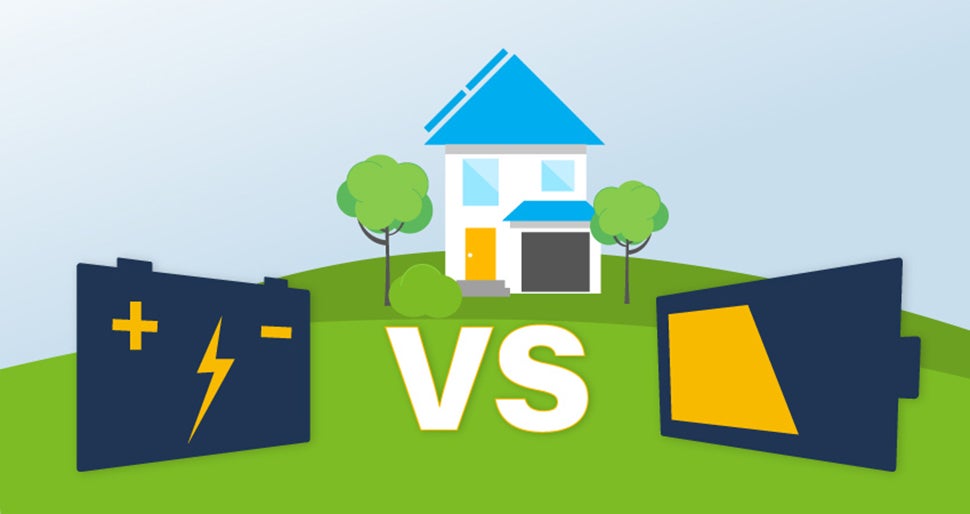 Besides the Powerwall, what solar batteries should you consider?

Every year, more and more homeowners choose to pair solar panels with solar batteries - and for good reason. Solar batteries continue to get cheaper year after year, and with widespread power blackouts becoming more common, people want to make sure they have access to reliable electricity.

The Tesla Powerwall has been the solar battery of choice for most homeowners, based on brand recognition and ease of use. But the company’s recent decision to only sell Powerwalls alongside its solar systems makes it difficult to get your hands on one.

The good news is there are solar batteries on the market from many other companies. In fact, there are so many options that it can be kind of confusing to pick one that’s worth your money.

To make it easier for you, we’ve collected a list of the best batteries on the market. Below is a rundown of the top solar batteries that are available for sale and up to the task of providing backup power for your home. We’ll cover each of their strengths and weaknesses and how they compare to the Tesla Powerwall.

Since the release of the first Powerwall in 2015, Elon Musk’s company Tesla has worked diligently on refining and improving its energy storage solutions. The current Powerwall+ comes with a 13.5 kWh usable capacity and is the most widely-installed battery backup for home use.

The Powerwall costs $11,500 for the battery, installed as part of a Tesla solar+storage system.

It’s very simple to use, with an app that controls how and when energy flows to and from the battery. The Powerwall is designed to fade into the background of your life, doing its job and remaining ready for a power outage.

That simplicity can be a benefit and a drawback. The Powerwall battery is easy to use, but because it’s connected to your home via AC power, solar energy to be stored in the battery is converted from DC to AC first, meaning the battery is less efficient than one with a direct DC connection to a solar installation. In addition, the Powerwall comes only in one size. If you need just a little more energy than one can provide, you’ll need to pay for a whole second battery.

Another problem has to do with battery chemistry. Tesla is among the many battery manufacturers that use lithium nickel manganese cobalt (NMC) in its battery cathodes, while other manufacturers have chosen lithium ferro phosphate (LFP) chemistry. NMC batteries perform very well, but cobalt is toxic and can only be mined in specific places in the world, where it’s associated with a variety of health and safety issues. Additionally, NMC batteries operate at a higher temperature and are more associated with an increased risk of fires than LFP batteries. Tesla has hinted that it will switch to LFP for all its energy storage products, but that hasn’t happened yet.

Finally, remember that Tesla will install the Powerwall only alongside new Tesla solar panels or the Tesla solar roof. Tesla no longer sells the Powerwall as a separate product. The Powerwall is available from other solar installers, but they often have to deal with months-long waits to get them in stock.

So, if you can’t wait for the Powerwall, what batteries can you get?

German energy company sonnen has long focused its efforts on the production of solar batteries. Since 2017, sonnen has marketed its batteries in the United States through a network of installers.

The company previously only offered luxury solar battery solutions that exceeded the budget of most homeowners. In 2020, sonnen decided to take a stab at the mainstream residential market with the release of their newest battery, the sonnenCore.

The all-in-one sonnenCore battery storage system is a 10 kWh lithium iron phosphate battery that costs $9,500 before installation. This is substantially cheaper than their sonnenEco or EcoLinx models that could cost over $30,000 to install.

Pros of the sonnenCore solar battery

The sonnenCore battery melds together solar energy with features befitting even the most technologically advanced smart home, while still keeping it at a reasonable price.

Because of the company’s commitment to advancing technologies, the battery has many useful features that should be considered when looking at battery backup systems.

Some features of the sonnenCore solar battery include:

Cons of the sonnenCore solar battery

What type of home is the sonnenCore solar battery best for?

The sonnenCore battery is best for homeowners looking for advanced features like Time-of-Use load shifting and those who are interested in being able to track and control where their power is going. It’s also ideal for homeowners who expect to discharge their battery regularly, as it has one of the best warranties and throughput guarantees.

The sonnenCore can also bring you peace of mind, as its chemistry makes it safer and easy to recycle.

Generac has long been one of the top companies making home generators that help people survive during a power outage, so it’s natural that they have added home batteries to their lineup. The story of the PWRcell home battery starts with an acquisition. Rather than spend years developing an in-house solution, Generac bought Pika Energy, a successful manufacturer of home storage systems, and adapted its PWRcell for use in home systems.

Generac saw a way to integrate its own home energy management technology with the solar storage system. The company now sells its solar battery alongside Smart Management Modules (SMMs) to provide true whole-home backup, and plans future integration with additional smart circuits and a backup generator for true off-grid operation.

Our estimates show the PWRcell battery will add between $10,000 to $18,000 to the cost of a solar installation, depending on the number of battery modules included in the system. Like other solar batteries, that cost before any reduction from the federal tax credit, which can reduce the cost by 30%.

Pros of the Generac PWRcell

Cons of the Generac PWRcell

What type of home is the PWRcell right for?

If you haven’t yet installed solar panels on your home, and you’re in the market for a solar + storage solution, the Generac PWRcell system might be right for you. It’s a smart solution to home backup, and its modular design means you can size the system to your needs and even have room to inexpensively add more storage if those needs change. If you live in an area that is prone to power outages or want to go truly off-grid in the future, the PWRcell is a great way to power your home.

The LG Energy Solution RESU battery is a lithium-ion battery that captures solar energy and stores it for later use in residential settings. In 2021, Energy Solution (formerly LG Chem) introduced new higher-capacity RESU Prime batteries in order to answer the needs of the marketplace affected by power outages and to more directly compete with Tesla.

The average cost of one LG battery, including supporting equipment and installation, ranges from $7,000 to $13,000, depending on battery capacity, installation cost, and location.

Pros of the LG RESU battery

Cons of the LG RESU battery

What type of home is the LG solar battery system best for?

The LG RESU, like most of its competition, is not intended for those looking to go “off-grid". In fact, the batteries are designed to only work in hybrid grid-tied battery backup systems.

So instead, these batteries are best for energy-conscious homes that require energy coverage during peak consumption periods and unexpected power outages. The 16 kWh system is enough to cover a home for about a day of limited energy use, not several days.

Panasonic is one of the most recognized and trusted electronics brands in the world, and its solar and battery offerings match the company’s reputation.

Panasonic makes some of the most efficient solar panels on the market, and they’ve been designed to pair seamlessly with the EverVolt battery system. You can also buy the batteries separately and install them with or without solar panels.

Pros of the Panasonic EverVolt battery

Cons of the Panasonic EverVolt battery

Enphase Energy is one of the two largest manufacturers of solar inverters in the world, so it makes sense that the company recently introduced a battery that interfaces with your home using a special version of the company’s famous microinverters. The Enphase IQ Battery is an AC-coupled lithium iron phosphate (LFP) battery that comes in 3- and 10-kWh sizes that can be mixed and matched to create a larger battery bank.

In addition, IQ batteries can be connected to fossil fuel backup generators from popular companies like Kohler, Generac, and Cummins. This type of setup would provide a true off-grid experience when paired with solar panels, although it would eliminate the federal tax credit for the battery, given that it wouldn’t be charged exclusively from solar energy.

Pros of the Enphase IQ battery

Cons of the Enphase IQ battery

Electriq Power is a newer company that started in a California garage in 2014. The company has grown quickly since those early days, and it now offers the PowerPod 2 solar battery for homeowners looking for some backup power and load-shifting to prevent high peak power charges under Time-of-Use billing.

The PowerPod 2 comes in both AC and DC-coupled versions in sizes of between 10 and 20-kWh.

Pros of the Electriq PowerPod 2

Cons of the Electriq PowerPod 2

Is there a clear-cut winner among solar batteries?

The battery that will actually work best for your home will largely depend on your budget, your location, your personal energy consumption profile, and what additional features you’d like to see in your system.

We think the Generac PWRcell system is best if you’re installing solar panels at the same time. It gives homeowners the best chance to power many different kinds of appliances during a power outage, and its modular design allows you to add more storage modules if your needs change in the future.

If you already have solar panels and are looking for an AC-coupled battery, we recommend the sonnenCore. Although it comes with a higher price tag, this battery is simple to use, safe, and comes with a great warranty.

The batteries from Panasonic and Electriq Power are fine products in their own rights, but generally a bit more expensive and harder to get. That said, if you find a Panasonic-certified installer, you can get both panels and batteries that are perfect for each other. If you want something simple and more widely available, the LG batteries are industry standard, and many installers can put them in. Many other battery companies are just getting started, so watch this article to see if one of them rises to the top of our list!