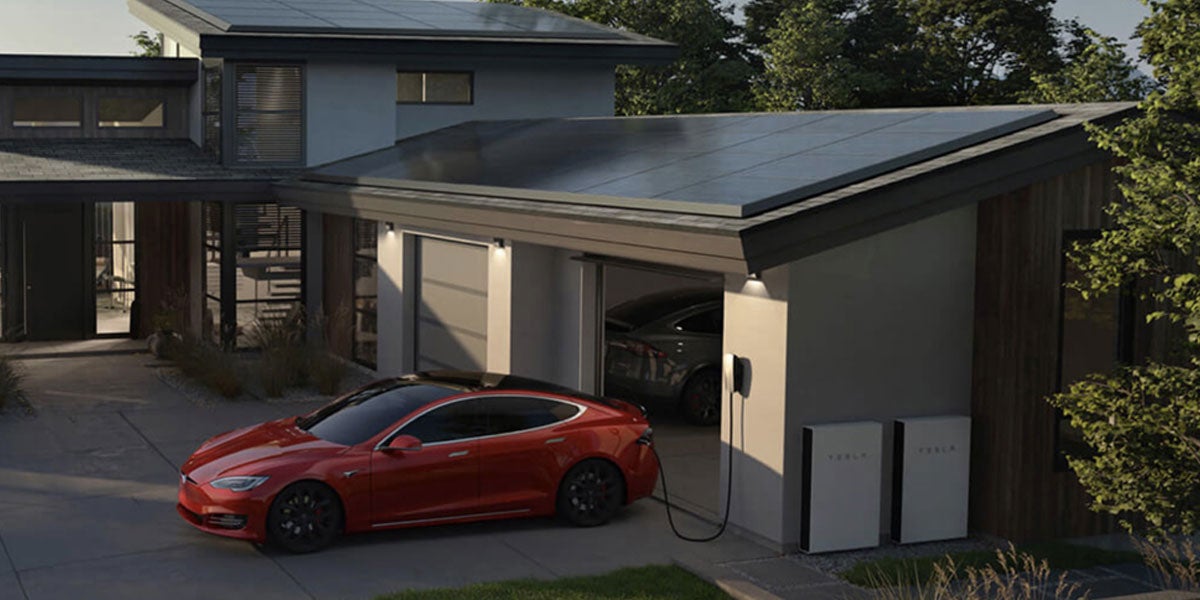 Your home can be completely renewable, thanks to Tesla solar panels, Tesla batteries, and a chargeable Tesla electric vehicle. Image source: Tesla

Tesla is often synonymous with high-end, luxury renewable technology, but its solar panel business can be a bit confusing. Tesla got into the solar industry in 2016 by acquiring SolarCity, with the goal of streamlining solar panel and battery storage manufacturing.

When Tesla took over, they retained the same sales and marketing infrastructure, but lacked the ability to produce solar panels at scale.

Tesla first partnered with Panasonic, in its Buffalo, New York gigafactory. Panasonic provided Tesla with solar cells, the component within solar panels that converts sunlight to electricity for energy generation. Unfortunately, Tesla and Panasonic’s solar cell production partnership ended in 2020 due to low demand from Tesla, although they remain in conjunction to build Tesla solar batteries for Tesla Powerwalls and electric vehicles.

Tesla then switched to using solar panels from third-party manufacturers, such as Korean solar giant Q CELLS, before introducing two lines of Tesla-branded solar panels for use in residential installation jobs.

Because of the mix of parties that can fall under the Tesla brand, clarity about what panels you receive when you purchase Tesla panels is a challenge. In this blog, we lay out what to expect.

See how much solar panels will cost for your specific home

Does Tesla manufacture its own solar cells?

No, Tesla is not the manufacturer of its solar cells.

After Panasonic’s departure from solar cell production for Tesla, we understand that Tesla no longer manufactures its solar panels. Instead, it appears to be using third-party manufacturers to source solar panels for installation jobs.

So what exactly are Tesla solar panels?

With Panasonic out of the picture, Tesla first switched to using solar panels from Qcells. Then in April 2021, Tesla announced the launch of its own solar panel, the Tesla T420S.

So, what should you expect if you order Tesla solar panels?

Well, right now it appears that for residential solar panel installations, Tesla is using two models of Tesla-branded solar panels, the H-series and the S-series. Both models appear to be Q CELLS panels with Tesla branding on them.

Here are the key features of these solar panels.

Tesla uses large commercial-sized 72-cell panels, and each panel has an output of around 400 watts. However, when it comes to key technical specifications - such as module efficiency and temperature coefficient - Tesla’s solar panels are decidedly average compared to competing Tier 1 solar panel brands.

Tesla offers three warranties. The solar panel product warranty is for 25 years, which is in line with the best solar panels on the market. The next is a 25-year performance warranty, where Tesla promises a maximum 0.54% annual degradation; this is slightly worse than average.

Finally, there is the 10-year comprehensive warranty for the entire system, which includes the solar inverter, the (optional) Powerwall, and balance-of-system equipment. A 10-year warranty is pretty standard for inverters and solar batteries, but there is convenience to having all of these warranties from a single company.

One of the biggest benefits of a Tesla solar panel system is its aesthetic appeal. Typical solar installations include skirting in an effort to hide all solar panel mounting hardware from the ground view, ensuring seamless integration into the roofing material.

Tesla’s panels are also black in appearance, which ensures the panels are as aesthetically pleasing as possible.

For more details, check out our full review of Tesla solar panels.

Why are Tesla solar panels sourced from third parties?

SolarCity’s business always sold third-party solar panels for its solar systems, and this practice carried over to their relationship with Tesla. Because it makes sense for Tesla to quote the cheapest cost solar panel to customers, it is not in its benefit to disclose the solar panel brand.

With the former Panasonic partnership, those solar panels would technically be the “Tesla brand” solar panels. But, purchasing solar panels from other companies, like Qcells, was still practiced.

Right now, it appears that Tesla is using Tesla-branded solar panels sourced from Qcells for most or all of its residential installation jobs.

How much do Tesla solar panels cost?

Tesla solar panels range in price from $9,600 to $48,352, before incentives, depending on the system size that is best for your home.

If you want to add energy storage to your system, each Tesla Powerwall will cost you an additional $11,500 before incentives.

Keep in mind that solar incentives can significantly reduce your final costs. In fact, the 30% federal solar tax credit is available to all taxpayers, and many states and utilities offer additional incentives and rebates, as well.

To see which incentives are available near you, use our solar cost calculator below.

What is the right Tesla solar system size for your home?

Until recently, Tesla offered a flat price for solar panel systems across the U.S. In March 2022, Tesla updated its solar pricing system, and there are now significant cost variations by state.

In terms of cost per watt - a standard measure of comparing solar panel costs - Tesla solar panel systems can cost anywhere between $2.00 and $2.51 per watt.

Luckily, estimating the potential cost for your home is pretty straightforward.

You can go to the online portal and enter your address along with your average monthly electric bill to get a quote. In a trial run, we estimated the costs for a 2,300 square foot home with an average electricity cost of either $140/month, $280/month, or $420/month. Tesla recommended a 4.80 kW system, 9.60 kW system, and 14.40 kW system, respectively.

The system sizes mentioned above are three of the standard system sizes that Tesla offers all residential solar customers. A fourth, larger system size - 19.20 kW - is offered in some markets, but you would need a very high electric bill to justify a system of that size.

How much will a Tesla solar system cost for your home?

It is actually pretty simple to figure out the cost of Tesla solar panels for your property based on your electricity usage.

To determine the kilowatt hours (kWh) your home uses per day - and thus the system size you need - check your monthly electric bill. It will show you the number of kWh your home used that month. Divide that by the number of days in that month to get a daily usage figure.

For example, if your home used 1,200 kWh in March, you would divide 1,200 by 31 to get an average of 38 kWh used a day. Based on solar system energy production estimates (shown in the table below), you’d probably need the 9.60 kW system.

**Costs shown for a home in Los Angeles, CA; exact costs may vary by state

If you are a Tesla fan, Tesla solar panels are a great choice and can easily be installed with a Tesla Powerwall home battery for a completely renewable house.

The solar panels might not be produced entirely by Tesla, but as long as you understand Tesla’s solar panel warranty, you should feel comfortable trusting a Tesla quote. Tesla does provide a 10-year workmanship warranty and at least 85% of nameplate power capacity after 25 years.

But, Tesla solar panels are not the best option in the market in terms of panel efficiency. SolarReviews recommends these brands if you choose to shop for solar panels based on how efficient they are.

Shop around and use our solar calculator to get a few competitive quotes before choosing a company and solar panel brand. After comparing costs, perhaps take advantage of Tesla’s price matching option if Tesla is your brand of choice.