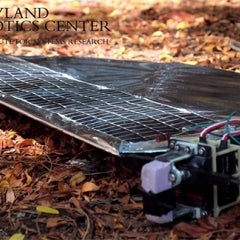 Solar power has already been used to power planes like Solar Impulse or NASA’s solar-powered airfoils, as well as cars like those that recently coursed across Australia, and ships like MS Tûranor’s PlanetSolar. But now solar energy is taking to flight in an entirely new way—powering the University of Maryland’s Robo Raven III, a PV-powered robotic bird.

If anyone remembers the little toy birds with flapping wings that were powered by twisting a rubber-band, the Maryland Robotics Center’s new bird is kind of like that, except very different. The solar-powered bird is programmable and capable of performing aerobatics; it could even pave the way for future micro air vehicles (MAVs), making them capable of long-term flights. 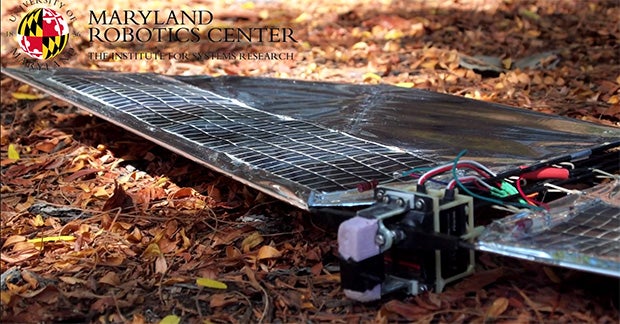 It was only earlier this year that Professors S.K. Gupta, Hugh Bruck and their students introduced a Robo Raven with independent wing controls. This allowed the mechanical bird to complete dives, loops and backflips. The solar innovation was able to mimic a bird enough that it was attacked by a hawk, explained one student in a video.

Such robots could be used to provide long-term environmental data collection, for instance. However, there was a problem with that idea. “Our previous version of Robo Raven needs to be plugged into an electric socket for charging the battery,” said S.K. Gupta, one of the professors at the center who has worked on robotic flying birds since 2007. “Ultimately, we envision Robo Raven flying deep into jungles, far away from civilizations, and hence electric sockets. To do this, Robo Raven needs to figure out a way to ‘feed’ itself to keep going during long missions.”

Flexible PV cells in the wings providing solar power was the answer. The PV cells help give the robo-bird a longer possible flight time and allows the bird to recharge. However, the cells are not powerful enough at this point to allow the mechanical bird to fly indefinitely during the day. At this point, the PV cells on the wings produce about 3.6 watts of the 30 watts the creation needs to fly. But they can charge the Robo Raven when it is stationary.

"These new multi-functional wings will shape the future of robotic birds by enabling them to fly longer, farther and more independently because they will be getting their power from the sun" says Mechanical Engineering Ph.D. student Luke Roberts, a Robo Raven team member.

"We still need to make significant improvements in solar cell efficiency and battery energy density to replicate the endurance of real ravens in Robo Raven III," Gupta said. "Robo Raven III has already demonstrated we can fly with a solar cell and battery combination. Now that we've successfully taken this step, swapping new technologies that are more efficient should be relatively simple." For instance, if the team was able to incorporate multi-junction PV cells like gallium arsenide cells into the wings, they could be much more efficient and provide more power for future incarnations of the Robo Raven or other small robotic creations.