With the addition of Lee’s Summit, MO, fully 200 communities across 35 states are now designated as SolSmart communities. Communities that have taken actions to make it more affordable as well as easier and faster for people to solar. 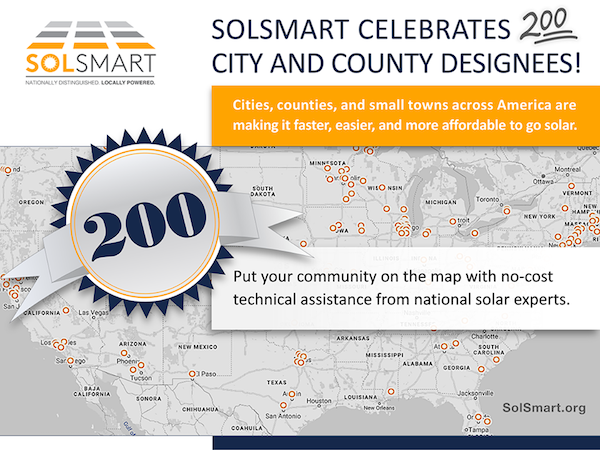 The initiative helps communities cut solar permitting costs by reducing wait times to no more than three days and streamlining the inspection process. It also helps communities launch Solarize programs which help reduce solar costs by using group purchasing of solar equipment to lower the costs of solar. Reducing permitting time alone can reduce the costs of a solar project by $700, according to SolSmart. Communities are adopting the SolSmart certifications rapidly. Last May just 58 communities had achieved such status.

The SolSmart Initiative is led by The Solar Foundation and the International City/County Management Association (ICMA) and funded by the Department of Energy's Solar Energy Technologies Office. Since 2016 it has provided no-cost technical assistance to help communities improve solar policies and permitting, making it easier for more people and businesses to go solar. Depending on the steps communities have taken, they are designated SolSmart Gold, Silver, or Bronze.

“SolSmart helps local governments tap the vast potential of solar energy to create jobs, strengthen the economy and power smarter, more resilient communities of the future,” explained Marc Ott, executive director, ICMA. “It takes courageous leadership from local governments to prioritize renewable energy, and SolSmart will continue to support them, helping to put the systems in place to attract solar industry investment and to generate the economic development and local jobs that come with it.”

“States and municipalities across the country are increasing investments in solar to meet clean energy goals, and SolSmart is helping local governments lead the way,” said Abigail Ross Hopper, president and CEO of the Solar Energy Industries Association. “These first 200 cities and counties to be designated ‘SolSmart’ have laid the foundation for hundreds more to follow, creating jobs and bringing new businesses to their communities.”

SolSmart is looking to work with more municipalities across the country and is encouraging them to sign up for the process at SolSmart.org. It opened up the process for the third round of SolSmart communities in April, they have until June 4 to apply.