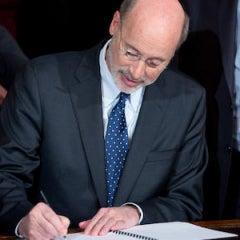 Yesterday (Jan. 8) Pennsylvania Gov. Tom Wolf (D) signed an executive order establishing a statewide goal to reduce carbon emissions in the state by 80 percent while increasing renewable energy to offset at least 40 percent of the state’s electric use. The order also established the GreenGov Council to achieve the order’s goals and boost clean energy in the state while saving taxpayers money and creating jobs.

“In the absence of leadership from the federal government, states and cities are stepping up and doing their part to reduce emissions,” Wolf stated. “Today I am proud to declare the commonwealth’s intention to address climate change, the most critical environmental threat facing the world.” 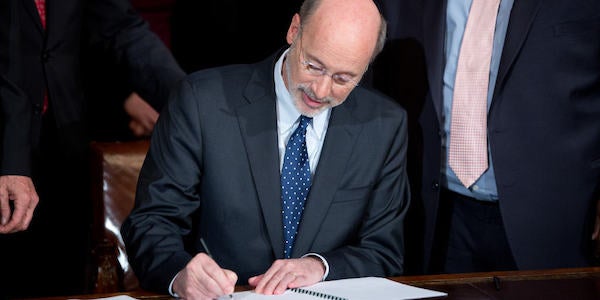 Under the executive order Pennsylvania aims to reduce its greenhouse gas emissions by 26 percent in 2025 compared to its 2005 levels and 80 percent by 2050. In addition it will reduce its overall energy consumption compared to 2017 by 3 percent annually, and 21 percent by 2025. Under the order by 2025 Pennsylvania will replace 25 percent of the state passenger car fleet with battery electric and plug-in electric hybrid cars.

“By setting these goals, Governor Tom Wolf is continuing to show he is ready to lead on climate even as the federal government sits on the sidelines,” said Mandy Warner, senior manager of Climate and Air Policy for Environmental Defense Fund. “Moving forward, developing enforceable climate pollution limits, for both carbon and methane, will be critical to ensure that Pennsylvania achieves these goals.”

The GreenGov Council Wolf established will implement environmentally sustainable practices throughout the state’s government. It will be co-chaired by Secretaries of the Departments of General Services, Environmental Protection, and Conservation and Natural Resources.

“Commonwealth agencies can continue to demonstrate their commitment to both environmental and fiscal stewardship by implementing best practices to reduce energy and resource consumption, improve energy efficiency, realize cost savings, and protect the environment,” Wolf said.

The new executive order builds on previous work Wolf has done to boost renewable energy in the state. In 2017, he created new programs to grow solar and renewables in the state.