Solar panels are becoming more common, but not many know exactly how they work. Image source: Science Alert

Everywhere you look, you see more and more solar panels popping up. Most people already know that solar panels generate electricity and that they can be installed on homes and businesses in order to save money on electric bills.

But if you’re the curious type and find yourself asking, “How do solar panels work?”, keep on reading, as we uncover some of the mystery surrounding solar power in this blog.

How do solar panels work: starting from the beginning

First, let’s look at the sun. It is a giant nuclear reactor 93 million miles away from us that is hurling energy in every direction in the form of tiny packets called photons.

Enough of those photons reach Earth’s surface every hour to provide more electricity than we use all around the world in an entire year.

The trick is harnessing that energy in a useful way - which is exactly what solar panels do.

How do solar panels work to convert sunlight into electricity?

A solar panel is a collection of many photovoltaic (PV) cells that are covered with protective glass and held together with a metal frame. This is why the official name for a solar panel is “PV module.” These PV solar cells are made of semiconductor material, typically silicon, that is sliced super thin.

Solar panels have many layers. The PV cell layer is where electricity is produced. Other layers, such as the glass and encapsulant layers, are there to protect the PV cells so the modules can properly produce electricity. Image source: Aurinka Photovoltaic Group

Cue the sun. The photons from the sun that are hitting our planet’s surface all day long are the key to answering the question of how do solar panels work.

The energy from those photons knock loose the electrons in the negative side of the PV cell and get them moving, which means we now have electricity flowing. This is called the Photovoltaic Effect.

When sunlight hits a solar cell, electrons in the solar cell begin to move in a circuit. This is how solar cells are able to produce electricity to power our homes!

But that’s just the beginning of the story of understanding how solar panels work because those electrons need a pathway to follow and the electricity has to be in a useful form. So, how does this happen?

The flow of electricity is important

The solar panels produce Direct Current (DC) electricity but the electricity generation that we use in our homes is Alternating Current (AC). To fix this problem, we add an inverter to our circuit. Then, the inverter converts the DC power to AC power.

The inverter is a key factor in determining how solar panels work because without an inverter in our PV system, we can’t do much with the power generated from the solar panels.

Inverters come in many shapes and sizes, and the one you should use depends on a few factors, including:

The two main types of inverters are microinverters and string inverters.

With these types of string solar inverters, you would connect the solar panels together in series of “strings” and feed a DC voltage to the inverter. The inverter then bumps it down to the AC voltage that is appropriate for the home or business where the system is being installed.

What is solar efficiency and what does it really mean?

An efficiency rating measures the percentage of sunlight hitting the solar cell that gets converted into usable electricity. The greater the efficiency, the less surface area it will take for the solar panels to meet your energy requirements—but the higher the price tag.

Some people associate greater efficiency levels with higher-quality panels, but this isn’t necessarily true. High efficiency means your solar PV system will utilize less space on your rooftop. Therefore, those who live in high-density areas and have very limited space for solar are generally more concerned with efficiency levels.

How do solar panels work: tying it all together

To complete the story of how solar panels work, in a standard, grid-tied system, the AC electricity from the inverter feeds into the home or commercial building. That AC power runs the electrical loads like lights, appliances, computers, air conditioners and machinery.

You can read more about how net metering works here.

Now that you have the answer to “How do solar panels work?”, you can get going on finding a local solar company to install some for you! 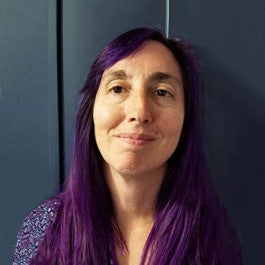 Catherine Kelso started her solar career repairing battery-based inverters and providing technical support for off-grid systems in 2005. Since then, she has been involved in many areas of the industry and has earned her NABCEP PV Installation Professional and NABCEP PV Technical Sales Certifications.