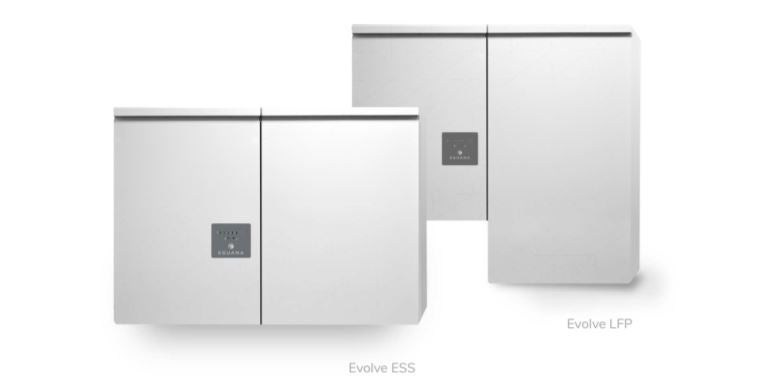 Eguana’s residential Evolve batteries are designed to store solar energy and keep your lights on during blackouts. Image source: Eguana

Eguana has been in the energy storage business for nearly two decades. Headquartered in Calgary, Canada, Eguana offers both commercial and residential batteries to store solar energy. Their products have been used in various applications, from the U.S. military to Mercedes Benz, and one of their models even utilizes the same battery cells used in the popular LG Chem battery.

But are the Evolve batteries right for your home? Turns out, maybe not.

How does the Eguana Evolve work?

Eguana Evolve batteries are designed to work with residential solar panel systems to provide backup power and decrease dependence on the utility grid.

Eguana’s Evolve batteries work just like other solar batteries - they charge with excess solar energy your solar panels produce during the day, and then discharge that stored energy to power your home at night. When a solar battery is paired with a solar system, it is called a hybrid solar system.

Learn more about how hybrid, or solar-plus-storage systems, work for homes in the below video:

Exactly how and when the Evolve battery will power your home depends on the operating mode you choose. The Evolve comes with three options:

You’ll find that most solar batteries on the market these days offer the same operating modes. What’s different about the Eguana Evolve is its “battery reserve” feature.

The Eguana Evolve batteries automatically reserve 25% of their capacity when operating in Solar self-consumption or Time of Use mode in case a utility outage occurs. This means you’ll be able to use 75% of the electricity your battery stores at any time, but you can only access that last 25% if the power goes out.

Although the batteries default to a 25% reserve, you can adjust how much of the power in your battery is reserved for outages to meet your specific needs.

Let’s take a closer look at each model and the differences between them.

The usable capacity rating is a measure of how much electricity a battery can store in kilowatt-hours (kWh) and gives you an idea of how long a battery can run your appliances.

Although the usable capacity ratings of the batteries are similar, there is an important difference between the two. The Evolve ESS is actually made of two separate battery packs, with each one able to hold 6.1 kWh of electricity.

Both of the Evolve batteries offer enough storage to run the most important appliances in your home during a power outage or cover a decent amount of your nighttime electricity consumption on a daily basis.

If you want more storage capacity, you can install additional Evolve battery packs. The LFP model can reach up to 42 kWh of storage and the ESS can get to 39 kWh.

Both the Evolve LFP and Evolve ESS have a power rating of 5 kilowatts (kW). This falls in line with industry standards.

If you’re looking to run power-hungry appliances, like an air conditioning system, a power rating of 5 kW probably won’t cut it. Instead, you might want to lean towards a more powerful battery like the Kohler Power Reserve or the LG Chem RESU Prime.

These efficiency ratings are a little bit low, but it’s not a total dealbreaker. If you’re trying to maximize the amount of solar energy your home is using, then you may want to consider a higher-efficiency battery, like the Tesla Powerwall.

The biggest difference between the Evolve LFP and the Evolve ESS models is their chemistry.

The Evolve ESS is a nickel manganese cobalt battery, or NMC battery for short. NMC batteries are the most common type of lithium-ion battery used for residential solar installations. NMC batteries are great for solar because they can store a lot of electricity in a small space, and they last a long time compared to lead-acid batteries.

The Evolve LFP is named after its lithium iron phosphate chemistry. The biggest advantage to LFP batteries is that they are more resistant to high temperatures and they don’t contain toxic chemicals like cobalt, which makes them a little bit safer than NMC batteries.

How much does the Eguana Evolve cost?

You can expect to pay between $10,000 and $20,000 to install an Eguana Evolve system, depending on the capacity. Based on the average performance specifications and the warranty they offer (more on that below), you’d probably want to spend closer to the $10,000 mark.

You also need to consider the cost of installing a backup load panel. The Eguana Evolve isn’t designed to run every single appliance in your home so, you need a separate breaker panel just for the backup loads you want the Eguana to run in a blackout. This can add about $1,000 to your project costs.

What is the Eguana Evolve’s warranty?

The Evolve LFP and Evolve ESS both come with a 10-year product warranty that ensures the battery will be free from defects, so long as the battery is used as intended. This is pretty standard for solar batteries.

Both models also come with 10-year performance warranties, which outline how much energy the battery will be able to store as it gets older. The specifics of these warranties differ between the models, so let’s take a closer look.

Eguana’s warranty states that the ESS model will retain 60% of its nominal energy capacity after 10 years or after the battery has stored and delivered 19.2 megawatt-hours (MWh) of electricity, whichever comes first.

60% capacity is below industry standard, with most solar batteries these days coming with 70% capacity retention after 10 years. All this means is that you can get batteries that will perform way better over time than this one.

Then we need to figure out which you’ll reach first: the throughput measurement, or 10 years in age. Remember, there are two battery packs within the Evolve ESS, which means the total throughput is actually closer to 38.4 MWh. If you charged and discharged the battery system every single day, you would reach 38.4 MWh after about eight and a half years.

So what does this mean? If you use all of the energy stored in your battery every single day, your warranty period will actually only be eight and a half years, not 10.

To be blunt, the Evolve ESS battery warranty is pretty lame. You could go with a number of other batteries and get a way better warranty.

The Eguana Evolve LFP performance warranty guarantees the battery will operate at 60% of its nominal energy after 10 years. The warranty does not list any other conditions including cycle life or throughput.

As we said earlier, 60% capacity is pretty low compared to other batteries on the market. Plus, with no defined throughput or cycle life for the battery, we can’t be sure exactly how usage will impact the battery.

The feature summary page on the Evolve LFP’s data sheet says it has a 15-year, 6,000+ cycle design life, but there’s really no other context provided for those numbers, and they don’t show up anywhere in their warranty.

Should I get the Eguana Evolve?

We’re going to be honest, you can probably do better than the Eguana Evolve. The price falls in line with other batteries on the market, but their performance metrics aren’t anything to write home about and their warranties aren’t up to basic industry standards.

If the Eguana Evolve is the only battery available near you, it’s not the worst battery to have, but you can get better ones at the same price point.

In reality, most U.S. homeowners don’t need a battery at all. If your utility offers full-retail net metering and you don’t experience a lot of utility power outages, you’re better off skipping the battery. All it’ll do is make you spend more without giving you any added financial benefit.

Solar panels, on the other hand, are a sure-fire way for most homeowners to save big on their electric bills. You can see how much you can save when you invest in solar panels for your home using our solar panel cost and savings calculator.