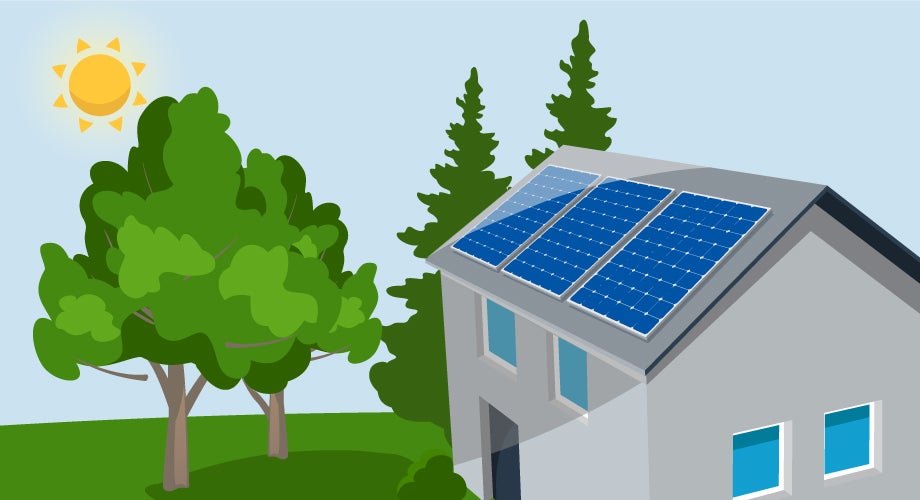 Many homeowners have roofs that are partially or fully shaded. Will solar panels still work on them?

There are many situations in which solar panels may not get direct sunlight. They may be covered by shade from surrounding buildings or trees, are turned away from the sun, or simply affected by weather conditions like clouds, rain, or snow.

What happens when solar panels - also known as photovoltaic (PV) modules - don’t receive direct sunlight? And how much importance should you place on shade and weather conditions when trying to decide if you should get solar panels?

We answer both these questions in this blog.

Solar panels work best in direct sunlight, but can also work without it.

Solar panels produce electricity using a combination of direct and indirect sunlight as inputs. Both forms of sunlight carry photons, which is what the solar panels convert into electric current.

There will, however, be a drop in performance in the absence of direct sunlight. That’s because solar panels need 1000 W/m2 of sunlight to reach their peak output; that much sunlight can only be achieved when there is direct sunlight shining.

Do solar panels work in the shade?

Yes, solar panels can work in the shade, but they will generate less electric current than they would under optimum conditions.

The exact impact of shading on your solar power system depends on these factors:

A professional solar installer can calculate how much shade a particular roof section will receive over the year, as well as help you calculate solar panel output and your solar payback period based on that.

Weather conditions can have a big impact on solar panel production. Clouds, rain, and snow can reduce both direct and indirect sunlight, hampering solar power production.

Yes, solar panels do work on cloudy days — but not as effectively as they would on a sunny day. That’s because clouds block some of the sun’s energy from reaching the ground (or in this case, your roof).

Under overcast conditions, your solar panels will produce anywhere between 10% and 60% of their regular power output, depending on how thick the cloud cover is.

Do solar panels work in the rain?

Rain itself doesn’t affect solar panel output, but the heavy cloud cover that accompanies rain does. When rain clouds are blocking sunlight and darkening the sky, system output will be 40–90% lower.

Despite that, though precipitation can cause short-term output losses, rainfall actually has a positive side effect: it helps to clean the solar panels. If you live in a dusty climate, the solar output boost from a good downpour can be significant.

Do solar panels work when it snows?

Yes, solar panels do produce power in snowy conditions - as long as the snow isn’t too heavy.

Sunlight can pass through a light dusting of snow, so your solar panel system will generate solar electricity during light snowfall. And cold weather is actually good for solar panels, as it prevents them from getting too hot and losing efficiency.

A heavy accumulation of snow, on the other hand, would block sunlight and greatly reduce energy production. The good news is that this situation rarely occurs: solar panels are great at shedding snow. This is because they are slick, warm up as they absorb heat, and are usually installed at an angle.

The Department of Energy also points out that, similar to rain, snow is effective in cleaning panels, as it melts away.

How much sunlight do solar panels require to be economic?

The general rule of thumb is that an average of four peak sun hours per day is enough sunlight to make a solar renewable energy system worthwhile.

Four peak hours is equal to 4000 watt-hours of cumulative solar radiation over a day. We explain peak sun hours, and the numbers for each state, in this blog.

However, the amount of sunlight is not the only factor homeowners should consider when evaluating the cost-effectiveness of solar. You’ll also want to take local utility rates and state incentives into account when calculating your payback period.

Find out what solar tax credits, rebates, and incentives are available to you here.

The higher your local utility rates and the better the local incentives, the higher the potential savings from solar. In fact, tese factors make Massachusetts - which receives an average of just three peak sun hours a day - one of the best places in the nation to go solar, with payback periods as low as 3.2 years.