The Iowa caucus is a long-anticipated event in the presidential primary. It serves as the first voting event in the election cycle, so it provides the initial glimpse into who could be the Democratic nominee for the general election.

This year, both the Republican and Democratic Iowa caucuses will take place on February 3, 2020. 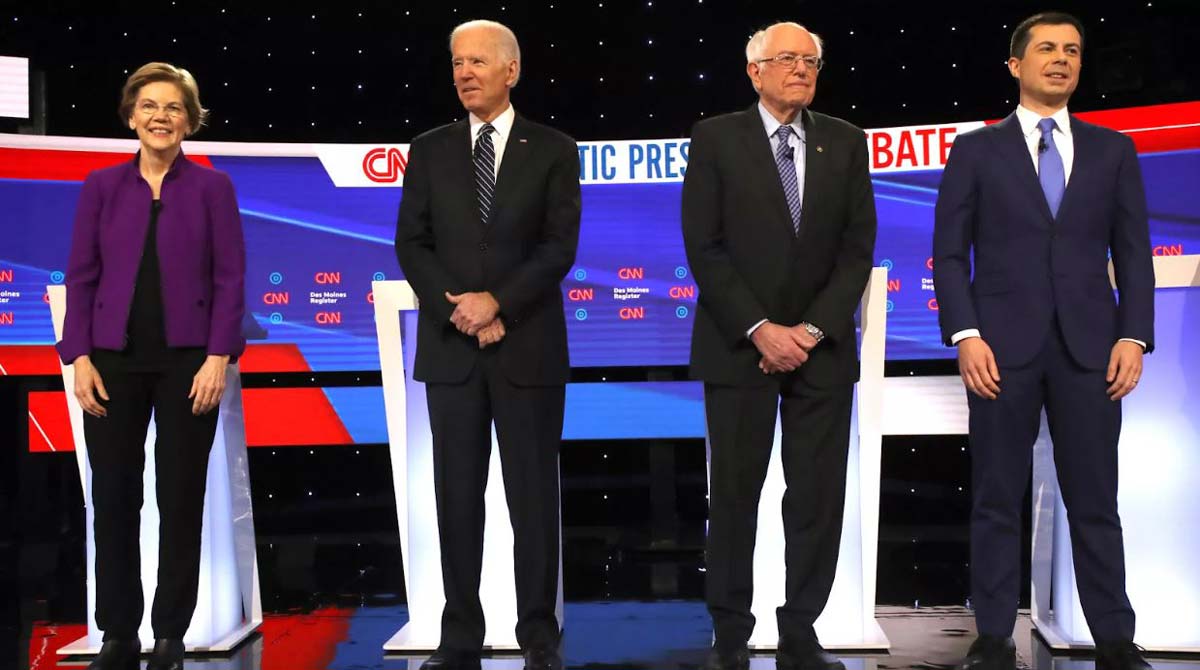 We’ll take a look into what the Iowa caucus is, how much it matters, and what its outcome could tell us about the future of the solar industry.

Editorial note: Because Republicans are coming into the 2020 election year with an incumbent candidate and many states have already planned to cancel their Republican primaries, this article will focus on the Democratic primary.

What is the Iowa caucus?

A caucus is a meeting of a political party’s members for the purpose of choosing candidates for political office. It has the same objective as a primary election.

The Iowa caucus is a closed caucus, meaning only those who are registered members of the Democratic party can participate. Iowa is one of only six states to hold a caucus, a fact which allows it to be the first state to vote.

So, for Iowa, having a caucus presents an advantage.

How does the Iowa caucus work?

Before we can understand why the Iowa caucus is important, we first need to know how the Iowa Democratic caucus works.

First, a caucus chair and secretary are elected. From there, supporters have the opportunity to make the case for their candidate. This allows caucus-goers the chance to discuss what policy issues they believe are important and find potential swing voters to vote for their candidate.Once the time for making cases is up, voters are able to cast their vote. The room is then divided into different areas, with each designated to one specific Democratic candidate.

To vote, the voter simply stands in the area designated for whichever candidate they support. Once all of the groups are formed, the caucus chair adds up how many supporters there are for each candidate. Each candidate must have at least 15% of the total number of people in the room supporting them, or else they are considered “not viable”.

Whichever candidate receives the most delegates in the state is the winner of the caucus.

Is solar worth it for your home?

The Iowa caucus candidates and their stance on solar

There are 12 active candidates competing for the Democratic nomination. However, there are four contenders in a tight race for the number one spot in Iowa. These candidates are:

Poll standings for Sanders, Biden, Buttigieg, and Warren for the Iowa caucus as of January 30, 2020. Image source: FiveThirtyEight

Joe Biden’s climate plan is best-described as lukewarm. Despite being a speaker at the Solar Power International conference in 2015, his climate plan is largely silent in regards to the solar industry. He doesn’t offer any plans for official federal policy for solar, and very little about plans for renewables in general.

Plus, Biden recently falsely stated that “there is not a single solitary scientist" who thinks that we can get to zero emissions by 2030. His lack of faith in renewable energy doesn’t make him a great solar candidate.

Pete Buttigieg generally plays as a more moderate candidate, and while his climate plan isn’t particularly ambitious, he does have some ideas that would be great for the solar industry. His goal is to double-clean energy generation by 2025, which has the potential to boost the solar industry in a big way.

He also proposed instituting a federal Clean Energy Bank that would provide low-interest loans, grants, and other funding opportunities for home solar and energy efficiency. This increased federal investment in solar could lead to more residential solar adoption by homeowners.

Bernie Sanders comes in with the most ambitious climate plan, also known as the Green New Deal. Bernie’s proposal calls for a vast and radical transformation of the energy market as a whole, with a focus on expanding the number of federal Power Marketing Administrations that would build new solar and other renewable energy sources.

He is also looking to obtain federal funding for energy efficiency grants for things like electric vehicles and energy storage. Sanders is also aiming to dramatically decrease the cost of energy storage, which would lead to a rise in the number of storage installations.

Bernie Sanders tours a solar testing center in Williston, VT before giving a speech about the importance of the solar industry. Image source: WAMC.org

His climate plan also mentions ceasing all fossil fuel use in buildings by 2030. Historically, Bernie has supported legislation like the Ten Million Solar Roofs Act and has spoken about the need for promoting and investing in solar energy.

Elizabeth Warren’s climate plan, similar to Bernie Sanders’, is a relatively progressive one when compared to the group of candidates as a whole. By 2035, Warren hopes to achieve 100% clean energy.

Her plan also outlines a goal that includes investing billions of dollars into the research and development of microgrids and energy storage. This is a concept in which none of the other candidates have brought up, thereby garnering her some bonus points for the solar industry.

Warren also stated that she plans to extend existing tax credits for wind and solar. Other candidates have not explicitly stated that they would extend the federal tax credit, so this is another major plus for Warren.

Of the four frontrunners, Senator Elizabeth Warren and Senator Bernie Sanders seem to be the most solar-friendly candidates, as they have shown support for the industry both historically, as well as in their proposed climate plans.

Is solar a major voting issue for Iowans?

The solar industry in Iowa is relatively new, so it is not as big or established as it is in other states. Iowa has 844 solar jobs total, which is only about 0.054% of the state’s non-agriculture based workforce, whereas in the US, solar workers make up about 1.5% of the total people employed in the country.

Despite these facts, however, Iowa’s solar industry has been growing year after year. Three major solar projects are set to come online in 2020 which will provide The Hawkeye State with an additional 819 megawatts of solar. Plus, between 2017 and 2018, Iowa’s clean energy workforce increased by 3.6%.

Iowa also had more small-scale solar installations than some Midwest and Plains states like Indiana, Michigan, and Kansas.

In fact, a poll conducted by the Monmouth University Polling Institute found that 26% of Iowa democrats found climate change and environmental issues to be one of their top concerns. This makes climate and the environment the second-most important issue to Iowans, only after healthcare.

A candidate's climate change policy will likely have an impact on how the citizens of Iowa vote. As a result, Iowa may be more likely to vote for someone with a stronger environmental progress plan, which bodes well for the solar industry.

Why is the Iowa caucus so important?

It is believed that how well a candidate does in Iowa is an indicator of how they will perform in the remaining primaries. When a candidate wins the Iowa caucus, it is likely that they will continue on to see victory in other states, as well.

Historically, political scientists have put a lot of weight into the Iowa caucuses because they create momentum for the candidates. Momentum describes the theory that if a candidate wins in a primary election, they will have an advantage in the next state’s primary.

Whether or not that candidate is a strong advocate for the renewable energy sector could have a direct impact on the future of the US solar industry.

Former President Barack Obama won the Iowa caucus in 2008. Obama would go on to win the Democratic party nomination before becoming the 44th US President. Image source: NBC News

Also, because Iowa is the first state to vote, there is a lot of media coverage of the caucuses. When a candidate does better in Iowa than they had expected to, they tend to get a ton of media coverage, which helps them get more exposure and, in turn, more votes in the next election.

The Iowa caucus, the 2020 presidential election, and the solar industry

Despite the state’s growing solar industry, it isn’t yet big enough to make solar a primary voting issue for Iowans. States with more established solar industries, like California, are more likely to consider the impacts of a candidate’s policies on the solar industry because solar is a major part of their workforce and economy.

Luckily, climate change and the environment are both important voter issues for Iowans. Because of this, Iowans may vote for candidates with stronger overall climate plans, like Warren or Sanders. This would, in turn, benefit the solar industry. However, the small size of Iowa’s solar industry would not be the key factor influencing how caucus-goers vote.

A win for a solar-friendly candidate in Iowa could mean that they will perform better than the competition in the proceeding primaries.

If that’s the case, a win for a pro-solar candidate in Iowa would increase the chances of the US having a presidential candidate who would strengthen and expand the solar industry.

Check out how much solar panels will cost for your home, based on your location and most recent bill