What is a solar tracker and is it worth the investment? 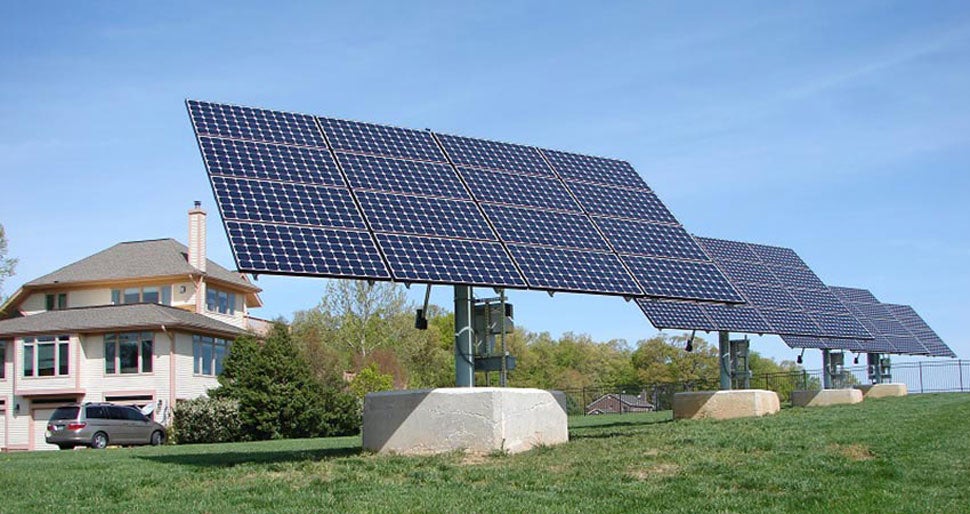 Solar trackers allow your solar panels to follow the sun’s path in the sky, just like a sunflower, so they can produce more solar power. But, solar tracking systems come with a high price tag.

Is the extra solar power output worth the additional cost of a solar tracker? In most cases, it makes more sense to just install more solar panels.

Below, we explain everything you need to know about solar trackers, from what types there are to whether or not they’re a worthwhile investment.

What is a solar tracker?

A solar tracker is a device that follows the sun as it moves across the sky. When solar trackers are coupled with solar panels, the panels can follow the path of the sun and produce more renewable energy for you to use.

Solar trackers are usually paired with ground mount solar systems but recently, rooftop-mounted trackers have come onto the market.

Typically, solar tracking equipment will be connected to the racking of the solar panels. From there, the solar panels will be able to move along with the movement of the sun.

Manual trackers require someone to physically adjust the panels at different times throughout the day to follow the sun. This isn’t always practical, as you need someone to constantly monitor the sun and change the position of the solar panel system.

Passive trackers contain a liquid with a low boiling point that will evaporate when exposed to solar radiation. When the liquid evaporates, the tilt system becomes imbalanced. This imbalance causes the panels to tilt towards the direction of the sun’s rays.

Active trackers rely on motors or hydraulic cylinders to change position. The motors in active trackers will move the PV panels so they are facing the sun. While this is more convenient than manual trackers, the moving parts within the motors could easily break. This could lead to higher maintenance costs over the lifetime of the system.

From there, solar trackers can be categorized even further, based on which direction they move. A solar tracker can be either:

Single axis trackers follow the position of the sun as it moves from east to west. These are usually used in utility-scale projects. A single axis tracker can increase production between 25% to 35%.

This tracker not only tracks the sun as it moves east to west, but also follows it as it moves from north to south. Two axis trackers are more common among residential and small commercial solar projects that have limited space, so they can produce enough power to meet their energy needs.

Dual axis trackers can increase energy production by about 40%.

How much does a solar tracker cost?

Solar trackers can greatly increase the cost of a photovoltaic solar installation. A standard 4 kilowatt, ground-mounted solar system will cost about $13,000. Tracking equipment can cost anywhere from $500 per panel to over $1,000 per panel.

If you included a single axis tracking system on the same array, it would drive the cost up to about $20,000. That’s a premium of 57% over the cost of the fixed array for just 35% more solar output.

A dual axis tracking system would cost even more, coming out to around $26,000. That’s double the cost of the entire fixed ground mounted system!

What are the pros and cons of using a solar tracker?

Just like everything else, solar trackers have benefits and drawbacks.

Are solar trackers worth the additional investment?

In most cases, solar trackers are not worth the additional investment, even though they do produce more electricity. Because solar panels are cheaper than ever, it would cost less to install more solar panels than it would to include a tracking system.

For example, let’s say you installed 15 ground mounted solar panels that had a power rating of 300 watts. The total cost of this system would be $14,625.

You would spend an extra $15,000 for a tracking system, and in return only get an additional $440 in savings a year. The payback period for the system would jump to almost 20 years!

Instead, you could install 6 additional solar panels and generate the same amount of power that a dual axis system would. The best part is you would only have to spend an extra $5,850 to increase the number of panels in your solar energy system.

To track or not to track?

Where solar trackers do become useful is when you have limited space for an installation. If you do not have the space for additional solar panels, installing a solar tracking system would allow you to produce more power in a limited area.  Solar trackers are also useful in large scale utility or commercial installations.

It’s important to consult with a local solar installer to find out exactly how much a solar tracking system would cost you. You can use our solar calculator to get an idea of the price of solar in your area and how much making the switch to solar can save you on your electric bill.