That’s right, not one, but two thin-film solar photovoltaic (PV) technologies broke efficiency records this week. Both technologies put their thin-film PV within much closer range of silicon-based PV, which comprise the overwhelming majority of installed solar power today. 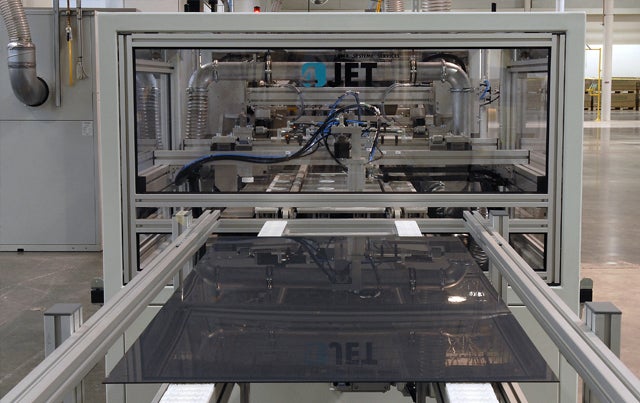 Since thin-film embraces a variety of technologies, they’re at different levels of efficiency but all are competing to catch up with silicon PV, which is led as of February 2014 by Panasonic, which has produced silicon cells that convert 24.7 percent of the sun’s energy into electricity. On the other hand it’s generally much less expensive to produce thin-film PV since it can use less expensive components and processes than most silicon technology requires.

Earlier this week First Solar, one of the world’s largest thin-film PV companies, announced that it set a world record for cadmium-telluride (CdTe) PV cells, converting 20.4 percent of the sun’s energy into electricity. The cell was built at the company's Perrysburg, Ohio, factory.

"This record marks another achievement in our mission to unlock the industry-changing potential of CdTe PV," said First Solar's Chief Technology Officer Raffi Garabedian. "We are demonstrating improvement in CdTe PV performance at a rate that dramatically outstrips the trajectory of conventional silicon technologies, which have already plateaued near their ultimate entitlements.”

This new record was certified by the National Renewable Energy Laboratory (NREL) and bests the previous record of 19.6 percent efficiency. The former record was set by GE Global Research in 2013. However, the companies partnered last April, with First Solar acquiring GE's CdTe solar intellectual property. Under the partnership the companies also secured a collaborative research partnership.

“The synergy realized in our partnership with GE also demonstrates the value of our consistent and strong investment in R&D,” Garabedian. “The advanced technologies and processes we developed for this record-setting cell are already being commercialized and will positively impact performance of our future production modules and power plants.”

Depending on how fast First Solar is able to bring the new technology to market it could give multicrystalline silicon PV a run for its money. That technology is at about the same level of efficiency.

Yesterday (Feb. 27) Stion announced that it produced a 23.2 efficient copper indium gallium (di)selenide (CIGS)-based thin-film cell. This technology puts it within striking range of the most-efficient silicon-based PV cells. The company said it’s already scaled this technology at or above 20.0 percent efficiency on a prototype module (20 cm x 20 cm) and anticipates that it will soon be able to scale it to a larger module.

Stion uses a relatively unique tandem module technology, allowing the device to absorb more of the sun’s energy. “Achieving 23.2 percent cell efficiency and 20 percent mini-module efficiency on this state-of-the-art technology clearly demonstrates Stion’s commitment to technology differentiation and its deep IP portfolio,” said Stion Founder and Senior Vice President and Chief Technology Officer Howard Lee. “Showing initial results of 20 percent plus is a strong validation of scalability, and our ability to provide Simply Better solutions to our customers using this technology. We expect the technology to keep improving with production experience”

The company did not provide who certified the efficiency of its new cell. But it said it plans to implement the key technical innovations behind the PV cell on its pilot production line in San Jose, Calif. as it prepares to move to commercialization of its technology.