Will solar panels survive a nuclear EMP (and dear God, why do we have to think about this?)

With what sometimes seems like daily news headlines about the unstable leaders of rogue nations threatening nuclear attacks, people are understandably worried that civilization might end soon. Some other people have opined that civilization hasn’t felt very civilized lately, and maybe it might be time for it to either improve drastically or get the ending over with, already.

Whatever your take on our impending doom, fear of the indirect effects of a nuclear attack has led more than one of our readers to ask whether and how solar panels might survive. Good question!

First, let’s get some context and explanation out of the way:

The thing to be worried about here is what’s known as a nuclear electromagnetic pulse, or EMP for short. If a nuclear weapon of sufficient size is detonated high in the atmosphere, an EMP can disrupt everything that uses electronic circuitry, potentially causing irreversible damage to electronics in cars, airplanes, the U.S. electric grid, and yes, your home solar system. Of course, if a nuke is detonated a little closer to the ground, the EMP will be the least of your worries.

How does an EMP work?

Basically, an nuclear EMP disrupts the earth’s magnetic field to such a great degree that it causes electrons to go spiraling out all over the place, spontaneously zapping electronics in its path. There are three phases to an nuclear EMP, E1, E2, and E3.

E1 is the most damaging and fast-acting pulse, a huge burst of gamma radiation that saturates every meter of air within its considerable range with up to 50,000 volts of electricity within a few nanoseconds of the nuclear explosion.

Here’s a look at how much land area a high-altitude nuclear EMP can cover, compared to, oh say the United States of America: 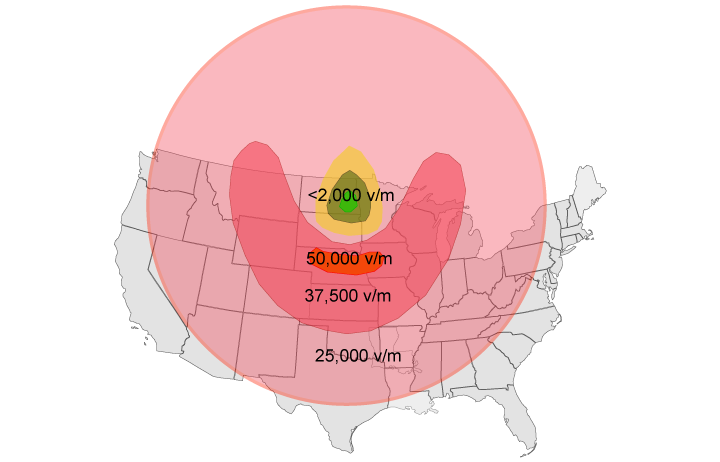 oh no, we are doomed

The whole of that map will experience E1 almost simultaneously with the blast.

E2 is more like lightning, which is good, because our power grid has lots of built-in protections against lightning, but bad because it follows E1, which will pretty much destroy everything that would’ve been protected from E2.

E3 is a slower-moving pulse that can produce geo-magnetically induced currents in long electrical conductors. In plain English, that means that things like telephone wires and power lines will slowly build a great charge, which can then zap electronics along the way. Things like power transformers and grid substation equipment would likely be zapped back into the dark ages, and with it all our precious electrical power.

So then what happens?

Well, the U.S. Government has commissioned a few studies of the effects and likely aftereffects of an EMP attack deployed against the country. The 2004 report contained this little nugget about the effects of E1, 2, and 3 pulses: “The sequence of E1, E2, and then E3 components of EMP is important because each can cause damage, and the later damage can be increased as a result of the earlier damage.”

Fixing the problems caused by an EMP of sufficient magnitude would take weeks to months of replacing critical electric system components, and slowly re-stabilizing the electric grid. If you lose power after an EMP event, you’d better be ready for half a year or more of cold soup, and roving bands of ravenous former neighbors on the hunt for soup like yours. 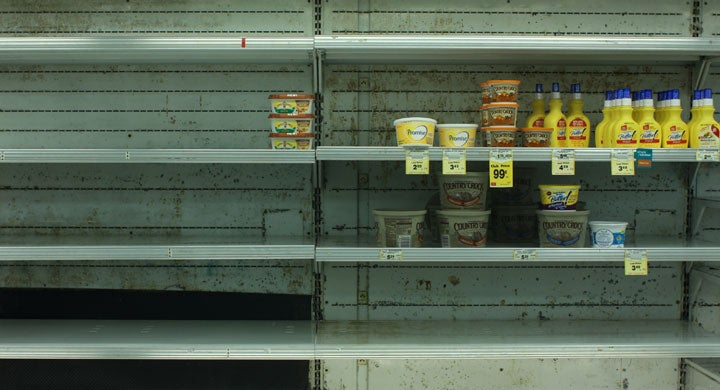 Ulp. Maybe those doomsday preppers have it right. Oh, and just in case you’re not worried enough to stay awake at night, there’s always coronal mass ejections to make you need that melatonin.

Wait, what are Coronal Mass Ejections?

Called “CME” for short, a coronal mass ejection is a huge solar flare that sends waves of charged particles through space in a direction that corresponds to the place on the sun from which the CME arose.

These things actually happen pretty often; from between once per week to a few times a day depending on solar activity. We usually don’t think too much about them, because they rarely affect us, but when they’re very big, and pointed in just the right direction…

Well that’s not so bad

But when they’re very, very big, and pointed in just the right direction… it’s a lot like the E3 component of a nuclear EMP, and can shut down the grid in much the same way.

In fact, when the first modern recorded CME struck in 1859, it zapped huge portions of the telegraph system, aka “the Victorian Internet” 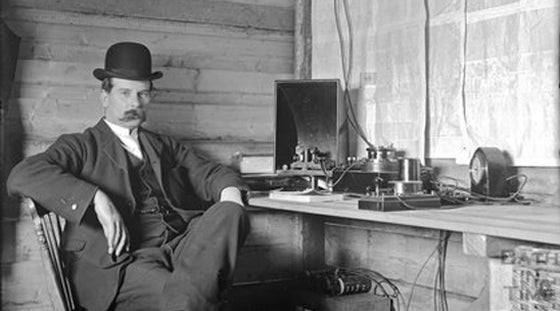 “Oh fiddlesticks, my chatrooms are all down.”

We haven’t had one that big hit Earth since, but in 2012, there was a very near miss that could have cost the U.S. $2 trillion and knocked out huge transformers that would take years to repair.

But there’s only a 12% chance that a CME like this will hit the Earth in the next 10 years, so no worries mate, hah ah aha hahahaaaa oh fudge.

Anyway, if an EMP brings the grid down, you might have worse problems

In order to cause a nuclear EMP of sufficient magnitude to take down much of the U.S. energy grid, it would take, at minimum: intercontinental ballistic missiles, nuclear warheads, and a complete disregard for the consequences. If a country with weaponry sufficient to cause such an blast causes one, we’d be in thermonuclear war, and protecting our stockpile of food (not to mention having a way to charge our smartphones) would probably be the least of our worries. 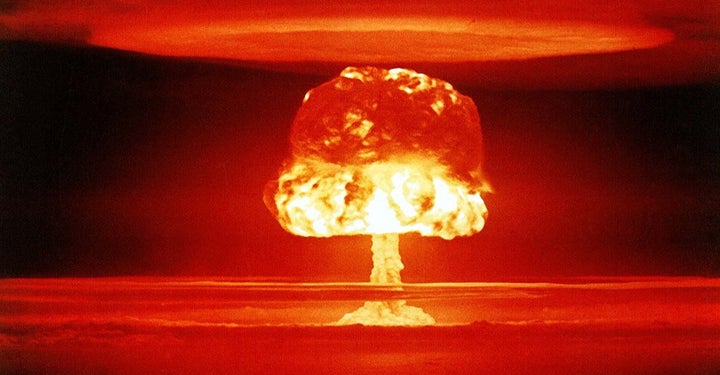 The most of our worries

Now of course, some folks might rightly point out that the recent rhetoric and evidence of ICBM tests from North Korea represent exactly the kind doomsday scenario we’re describing here and oh lordy I’m getting panicky again.

Suffice it to say, you’ll “hypothetically” want to know what might happen to solar panels and the associated equipment in the “hypothetical” case of an attack. So we’ll assume the EMP we described above happens sometime down the road, and go from there:

So really… will solar panels survive an EMP?

In short? Probably not so well if they’re plugged in and working at the time of the pulse. Sorry to be a downer.

The good news is solar panels in and of themselves contain very little electronics that could be affected by an EMP. The bad news is they’re usually connected to wires with current flowing through them, which makes them susceptible to damage.

That’s because wires act like antennas that gather the pulses’ signals, as in the case of the E3 component of the EMP. Any panels attached to the grid will almost certainly be affected by a nuclear EMP. The Pulse might not completely zap them, but it’s likely their functionality will be greatly reduced. Even if the panels are hooked up in an off-grid solar configuration; if they’re connected at the time of the explosion, they’ll likely suffer serious damage.

On top of that, the sensitive electronics inside a solar inverter and charge controller would likely be fried by E1 before the panels go, too. There’s a chance that means the panels themselves could survive the blast, but then you’d have to replace the rest of your components.

How to save your solar stuff with EMP protection

Like we said above, wires act like antennas for the panels, and the longer the wires get, the higher the potential for damage. But if panels aren’t connected to anything, they probably won’t sustain any damage at all. It’s also likely that solar inverters, charge controllers, computers, smartphones, and more won’t be affected if they aren’t turned on and plugged in.

But to be especially sure, you need to employ some method of EMP protection, like…

A Faraday cage is a simple device that protects sensitive electronics from electromagnetic (EM) radiation. It’s basically just a box with a non-conductive frame wrapped in metal mesh, which conducts electricity and EM radiation and protects the stuff inside from getting zapped.

Electronics inside a Faraday cage should be able to survive the effects of a nuclear EMP, especially if they’re stored… y’know, down in your bunker with all your other supplies for the aftertimes. You might say electronics stored in a Faraday cage are the Army Rations of the gadget world.

Get an EMP-hardened solar inverter

You could try mounting a Faraday cage around your solar equipment, but again, if it’s plugged in, that’s not going to stop an E3 pulse from frying your circuit boards. There is, however, a company that has done the work for you.

Sol-Ark solar inverters are EMP-hardened, meaning they’re specifically designed to withstand all the disruptions of an EMP, whether it comes from a nuclear weapon or the sun. They even make it easy to plug batteries in to get you through the day after the grid goes down.

Check out Sol-Ark Inverters/Charge Controllers here, and have fun watching this video of them zapping various objects with EMP: