Where is solar power used the most? 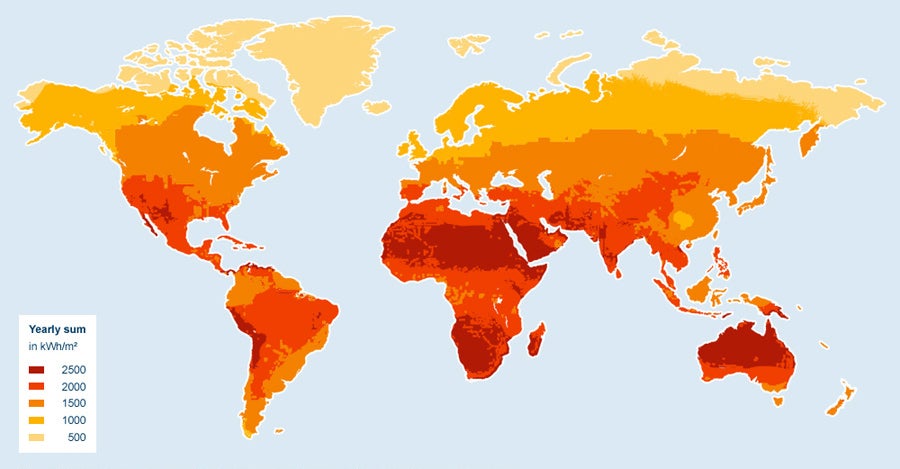 Nearly every inch of the world has the potential to host solar panels and power the renewable energy future.

Solar power is a renewable and clean energy source that is expanding exponentially throughout the United States and the world. In 2020, the world installed 260 GW of solar power, and the 2021 numbers are expected to be even more exciting (they are not available yet as of this writing, January 2022).

In 2021, the U.S. installed a total of 113.5GW of solar power, 1GW of which was residential only. Although U.S. installations are on the rise, China continues to dominate the world stage.

Read on to dig a little deeper into solar power use around the globe.

What countries have the highest installed capacity of solar PV power?

China leads the way in installed PV with the United States and Japan in second and third place for installed solar capacity, respectively.

The table below is based on data from the International Renewable Energy Agency 2019 country ranking report.

Where are solar energy resources located?

Solar radiation produced from the sun’s energy is in abundance all over the globe, but some locations are more suitable for solar PV panels than others.

For example, it makes more sense to utilize the sun’s power in places where the sun shines all year long, such as in deserts.

Where there is more sun, there is better potential for adding solar technologies within the utility energy mix. Some of the countries with the most sunlight are on the top 10 solar capacity list, such as Australia and India, but there is certainly untapped potential in Africa and South America.

Many of the countries in the world that have the highest per capita of installed solar power do not necessarily have high levels of insolation from the sun.

A great example of this is the state of New Jersey. It is not the sunniest state in the U.S., especially compared to sunnier locations like Nevada or Hawaii, but it boasts a huge market for solar because of the generous state incentives coupled with federal incentives that make solar more affordable.

Find out which incentives & rebates you qualify for by installing solar

China is the largest solar energy producer in the world

Over the past few years, the Chinese capacity of solar panels has increased exponentially. It has grown to be the largest solar market in the world and it is estimated that by 2024, China will have 370GW of solar power installed, double that of what the U.S. is expected to have.

While this growth is impressive and admirable, China will have to continue to ease off their coal power generation dependence to be seen as a true leader in renewable energy.

Europe has been incentivising renewable growth for years and plans to boost renewables to enhance their post-COVID-19 economic recovery. Additionally, Germany, Italy, the UK, and France are currently at the top in terms of solar farm capacity, or agrivoltaics.

To reduce CO2 emissions, the European Union countries are planning to draw most of their electricity from renewables by 2050, with solar power as the leading power source.

The solar photovoltaic industry is increasing in the U.S.

Energy companies within the U.S. are also starting to embrace solar for its low-cost energy production and job creation - and are beginning to incorporate solar power plants into their energy mix.

California remains at the forefront for solar PV system growth in the U.S. and is one of the best states for installing solar. But now, other states are catching up, including Texas, Utah, Florida, New York, Massachusetts and Rhode Island.

It is projected that by 2024, there will be an average of 1 solar installation per minute in the U.S., according to the Solar Energy Industries Association.

The global trend for embracing and increasing solar pv capacity is catching on. Governments are beginning to see huge benefits for electricity production by utilizing solar panels. Solar thermal plants are the power source of the future and should be incorporated on a large-scale in every country.

Find out how much you can save by going solar