What in the world are flow batteries? 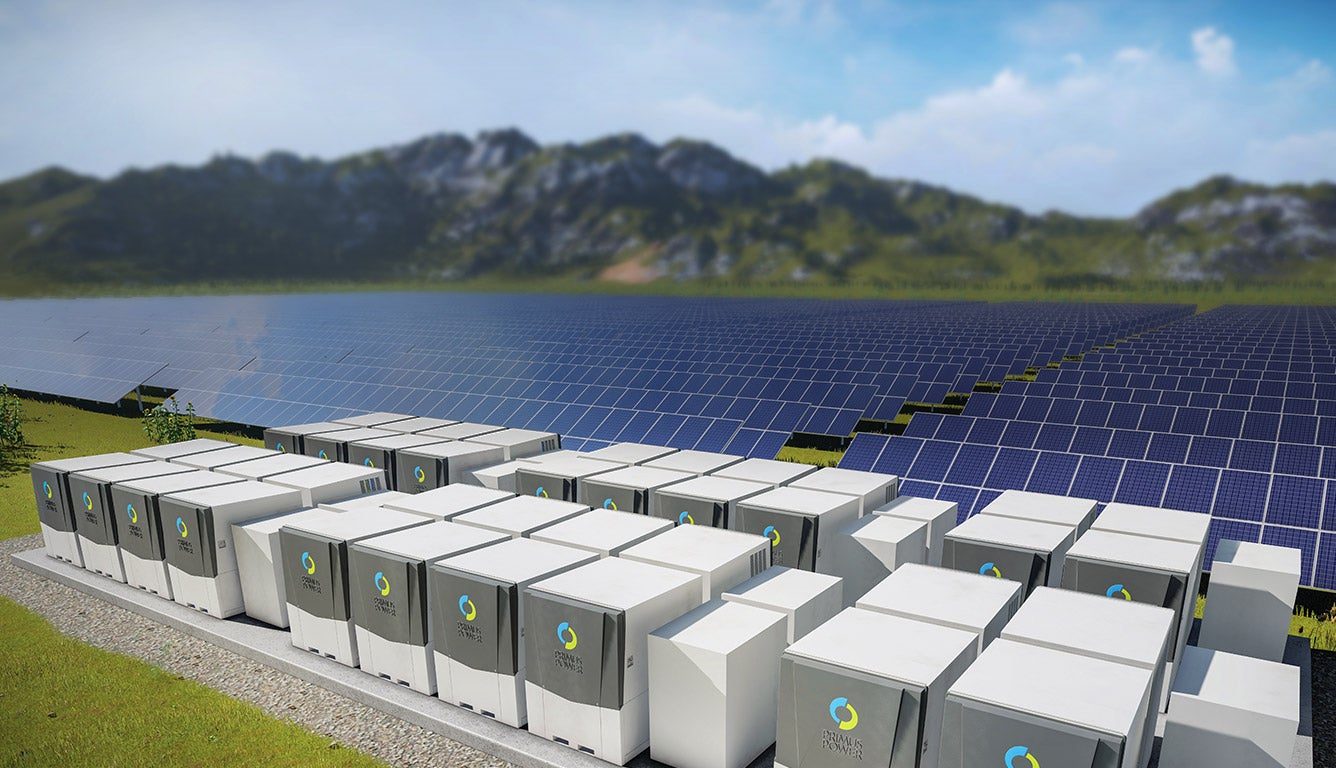 Engineers have been tinkering with a variety of ways for us to store the clean energy we create in batteries. Though the renewable energy battery industry is still in its infancy, there are some popular energy storage system technologies using lead-acid and high-power lithium-ion (Li-ion) combinations which have led the market in adoption.

Even so, those aforementioned battery types have deficiencies. They both have a relatively short lifespan and aren’t recommended to be fully discharged before they should be charged up again. Battery geeks refer to the latter feature as a shallow “depth of discharge”.

Flow batteries are a new entrant into the battery storage market, aimed at large-scale energy storage applications. This storage technology has been in research and development for several decades, though is now starting to gain some real-world use.

Flow battery technology is noteworthy for its unique design. Instead of a single encased battery cell where electrolyte mixes readily with conductors, the fluid is separated into two tanks and electrons flow through electrochemical cells and a membrane which separates them.

In this article, we’ll get into more details about how they work, compare the advantages of flow batteries vs low-cost lithium ion batteries, discuss some potential applications, and provide an industry outlook for their expanded use.

What are flow batteries and how do they work?

The main difference between flow batteries and other rechargeable battery types is that the aqueous electrolyte solution usually found in other batteries is not stored in the cells around the positive electrode and negative electrode. Instead, the active materials are stored in exterior tanks and pumped toward a flow cell membrane and power stack. The larger the storage tanks, the more electricity can be generated.

Power sources, such as a photovoltaic array or banks of wind turbines, charge electrons in the electrolyte solution in the positive anolyte tank connected to the anode through a process called “oxidation”.

The charged electrons are then pushed into the catholyte tank tied to the cathode through a process called “reduction”. Ion exchange occurs in half cells which sandwich the protective membrane separating the tanks.

When the battery turns on, the electrons flow back with the help of a pump into the first tank through a conductive microporous polymer membrane which generates an electric current.

Check out this great video which shows how the process, including state of charge, works in more detail:

Vanadium emerging as electrolyte of choice for flow batteries

There are different types of flow batteries out there, from polysulfide redox, hybrid, to organic, as well as a long list of electrochemical reaction couplings (including zinc-bromine and iron-chromium), though none have reached the performance, efficiency, or cost levels needed for wide scale adoption - yet.

Most of the commercially-available flow batteries use a vanadium liquid electrolyte, a material found primarily in Russia.

Vanadium in its crystalline form. Image credit: The Guardian

The special thing about vanadium, aside from its Russian heritage, is its ability to act like an electrochemical energy coat rack of sorts. Just as a coat rack can withstand centuries of coats added to and removed from its rungs, electrons can be added and removed from vanadium seemingly forever without the material degrading from charge-discharge cycles.

The ion exchange process of adding and removing electrons from a single element like vanadium is very different from chemical energy reactions which can degrade the materials in other battery cell types over time.

When vanadium is used as the primary ingredient in a flow battery, system lifespan is significantly improved over lithium-ion batteries. While a flow battery could theoretically last infinitely, the practical longevity looks to be more like 30 years, as pumps and graphite storage tanks may need to be overhauled after that timeframe.

Flow battery tanks are usually housed in self-contained units which look a little like truck trailers:

Some grid-scale flow battery arrays are the size of warehouses which can store megawatt-hours (mwh) of electricity.

For example, in the image above, a British utility company is experimenting using a multi-megawatt flow battery bank as a buffer between their power supply and their electric distribution infrastructure. Invinity, the producer flow batteries for this project, hopes large-scale installations like these become more common in the coming years.

Electrical grid operators and utilities alike have taken note of the promise of flow batteries to provide long-term reliability and many more daily hours of usage than other battery storage options, such as lithium-ion or lead acid batteries.

Flow batteries can discharge up to 10 hours at a stretch, whereas most other commercial battery types are designed to discharge for one or two hours at a time.

The role of flow batteries in utility applications is foreseen mostly as a buffer between the available energy from the electric grid and difficult-to-predict electricity demands. For example, in the summer, there can be lots of power generated from clean sources like rooftop solar panels on some days, and notably less on cloudy days. If it’s hot outside, there will be added demands for air conditioning.

Since a flow battery can store and discharge a reliable amount of electricity for almost half a day, it provides a way for utilities to avoid overproduction and an avenue to alleviate the stress of too much energy on the grid infrastructure.

Microgrids are smaller versions of an electric grid and at any time, they can operate independently from the electricity grid.

Microgrid power supplies can come from small-scale renewable sources, like collections of solar panels scattered around a village and several wind turbines. There are several strong advantages to them, including:

While they were mostly seen as a hippie socialist pipedream of sorts reflecting an idealized communal existence, they are gaining popularity and have been deployed in more areas recently.

Flow batteries could fit in nicely into the microgrid architecture for the same reasons utility companies are interested in using them. They last a long time and can serve the needs of the community when grid power is expensive or the microgrid is not able to produce enough energy on its own.

Because flow batteries can be rapidly "recharged" by replacing the electrolyte liquid, they make a lot of sense for the future of electric vehicle fuel.

The spent electrolyte could theoretically be drained and replaced easily at a fueling station. That sure would be a speedier solution than having to wait up to 20 minutes while your EV slowly slurps electrons back up into its lithium ion cells.

However, current flow batteries have a low energy density. That means, the driving range would be really short. There are some electrochemistry researchers looking into using high solubility salts in the electrolyte solution to increase range, but the application of flow batteries in EVs looks to be wishful thinking for now.

There are some important differences to account for when comparing flow batteries to the leading battery technologies like lithium-ion batteries:

The vanadium fluid most regularly used in the tanks, while rare and expensive, is also environmentally friendly. Since the tanks can be housed further away from the conducting cell membrane and power stack, they are even safer.

If you cycle Li-ion batteries every day, you can expect them to last about only 8 years, whereas vanadium flow batteries can last up to 30 years. That’s mainly because there are no needed phase-to-phase chemical reactions in flow batteries.

Electrons can be added and removed from the vanadium electrolyte without the material degrading. This leads to a hypothetically unlimited battery cycle life.

As mentioned previously, flow battery systems are heavy and require sizable electrolyte storage tanks. That storage capacity takes up a lot of space.

Because flow batteries have relatively low charge and discharge rates, their electrodes and membrane separators need to have a pretty large surface area. That leads to increased costs.

Finally, flow batteries have not reached the industry maturation of lithium-ion. Consequently, there are no production economies of scale achieved with this technology, which would bring the benefit of lower prices.

Whereas lithium-ion batteries can deliver big amounts of energy in a short period of time (1 to 2 hours), flow batteries have much less power density. That means they are better at delivering a consistent amount of less energy over a longer period of time (up to 10 hours).

Winner: It’s a toss-up, depending on the length of battery cycle needed

With more and more utility companies switching over to time-of-use billing structures, flow batteries provide a compelling solution for microgrid operators or large manufacturing facilities to shift expensive peak loads over to long-duration battery use.

Regardless, the flow battery market is forecast to have a moderate compounded annual growth rate (CAGR) of over 12% through 2025. Most of the demand is forecast across Asia, specifically China and India.

Vanadium redox flow batteries are expected to be the most commonly deployed type of flow battery, primarily because of their ability to be charged and discharged without degrading. The biggest players in the flow battery market are Redflow, Primus Power, and ESS.

The flow battery industry still has a ways to go before it can compete at cost with more mature lithium-ion technologies. Nonetheless, they promise a very long lifespan and long discharge time frames nearing half a day, and we expect to see them deployed more in the future as organizations and communities become more energy independent.

Dan is a solar journalist and content advisor with SolarReviews. He also works with solar installers and solar nonprofits to develop and execute strategic plans.