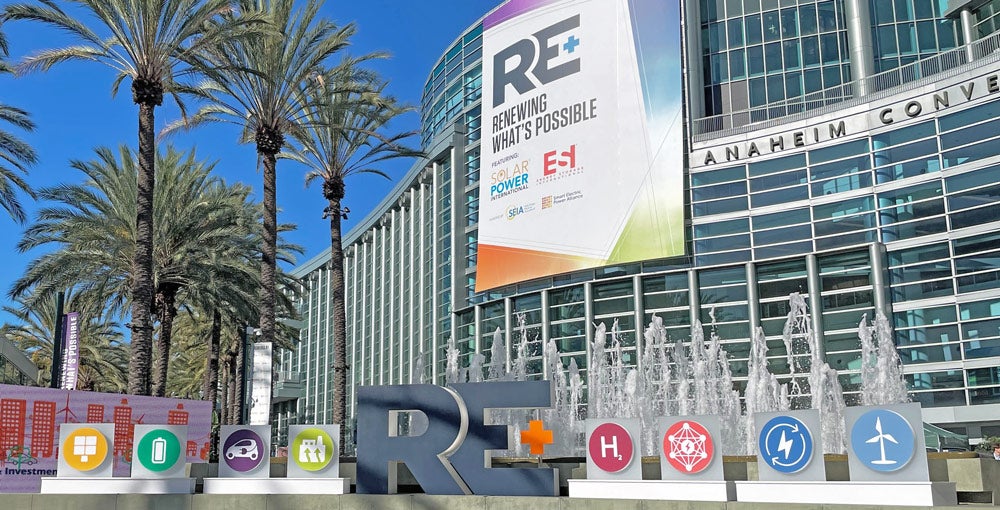 The RE+ 2022 logo and banner at the Anaheim Convention Center.

The 2022 RE+ conference in Anaheim, California has come and gone, and we’ve got some Thoughts and Feelings to share about it!

For those who don’t know, RE+ is the largest solar and clean energy conference in North America, combining events formerly known as Solar Power International (SPI), and Energy Storage International (ESI) with an additional focus on large-scale clean power and infrastructure.

So this was the first time many of us got to be together in 3 years, and it was filled with good vibes because of that. Without further ado, here are the key takeaways from RE+ 2022:

For the first time since 2019, RE+ brought the solar, energy storage, and clean power industries together under one roof. More than 27,000 people walked the convention floor and attended panel discussions and training sessions across four days in Anaheim. The booths were big, the afterparties were bigger, and the hall was buzzing with a sense of possibility and the contagious spirit of shared purpose.

The event was a special one for us, bringing together 31 SolarReviews employees who hail from three continents and many different time zones. We met with hundreds of current and future customers, held interviews with representatives from solar product manufacturers and our installer partners, and had a great time together during and after convention hours.

Most of the SolarReviews crew who attended RE+.

It was exciting to see old friends, meet new ones, and discover the latest and greatest products offered by manufacturers from around the world. There were bigger and better solar panels, smarter energy management systems, and, oh yeah…

2. Everyone has a home battery

Walking the aisles at RE+, it seemed like you couldn’t throw a tiny SolarReviews-branded foam football without hitting another new home solar battery. Boxes with rounded corners in every shade from pure white to dark gray could be found everywhere in both the solar and energy storage parts of the hall.

Aside from Tesla, which seems not to need any advertising, all the major players were there, including Sonnen, Generac, Enphase, and Panasonic. There were new offerings from Canadian Solar, Energizer, Fortress Power, Qcells, SimpliPhi/Briggs & Stratton, SMA, SunPower, Bluetti, and LG ESS (not to be confused with LG Energy Solution), alongside existing products from HomeGrid, Kohler, FranklinWH, and others.

Just a smattering of the many, many home solar energy storage solutions at RE+.

Finally, there were a couple dozen lithium cell manufacturers, mainly from China and Southeast Asia, many of whom decided to create fully-integrated offerings themselves and were pitching their systems on the margins of the convention floor to anyone who would listen.

It’s clear at this point that the market is turning to LFP battery chemistry over NMC—seemingly, only Generac and the two LGs remaining as NMC stalwarts. In general, the switch to LFP means longer warranty terms, more cycles before the batteries hit 70% capacity, and greater safety for the end consumer. It will be interesting to see which of these hundred or so battery companies becomes dominant in the marketplace, especially since…

3. Nobody has quite perfected the solar+storage home energy solution

Every battery company listed above does some things well. Some, like HomeGrid, offer modular solutions that are easy to install, customize, and repair. Some, like Sonnen, provide high-quality software and have utility partnerships that allow owners to participate in demand response and virtual power plant (VPP) programs. A smaller number are attempting to provide smart load control and generator integration to provide more robust and resilient solutions for grid outages.

But there still isn’t one solution to rule them all—something that will attract homeowners of all kinds. To really expand into a larger number of homes, the industry needs to develop a simple, affordable, customizable, and safe product that provides enough backup for more than just a critical loads panel to keep the fridge running and some lights on.

Some companies are getting close, and are maybe one or two product generations away from the ideal solution. The ability to offer a fully-mature home energy solution at a price that will ignite demand in markets across the country is further away.

4. The solar jobs are coming

But that was before the passage of the Inflation Reduction Act (IRA), which contains billions of dollars in stimulus to support citizens who purchase solar panels and companies that make solar and energy-storage products in the United States. According to our own survey of residential solar installers, the industry could expand by 148% over the next 5 years—an annualized 18.5% growth. At that rate, there would be 1 million solar jobs by 2030.

The IRA has already spurred Qcells to expand its plans to increase solar material production in the U.S., bringing REC Silicon along with it to restart solar cell manufacturing facilities in Washington. A number of battery manufacturers have also announced new factories in the U.S.

But this is just the tip of the iceberg.

5. The effects of the IRA are only starting to creep in

Everyone in the industry knows the effects of the IRA will be huge. Companies of all sizes are hiring, manufacturers are expanding, and U.S. consumers are more interested in solar than ever before.

That said, it seems only one company specifically called out the IRA in the design of its booth materials: SPAN. The smart electrical panel maker hung signs that flanked its outdoor display with call-outs about the $2,500 to $4,000 available for homeowners when they replace their main electrical panel.

The SPAN mobile demo booth outside of RE+ 2022. Source: SPAN

In other ways, the industry is still feeling out its response to the IRA. For example, nobody quite knows exactly when they’ll be building new solar in low-income neighborhoods to take advantage of the Section 48 tax credit adders that provide tax credits of an additional 20% of project costs.

We also don’t know what will be done with the $27 billion referred to in the IRA as the Greenhouse Gas Reduction Fund, much of which will be used to establish state programs to expand solar access to all Americans. The programs funded by that money will be designed by state and local governments in the coming months and play a huge role in the future of our industry.

There has never been a time in the history of the U.S. solar industry with such justified excitement about the future, and that feeling was palpable everywhere in and around the Anaheim Convention Center this year.

We’re bigger and better than ever, and ready to take on future challenges and opportunities. 2023 will be a great year for the solar industry, and we’ll be ready to party again next September in Las Vegas.

See how much you can save with solar panels