New Mexico’s solar tax credit is back with big savings 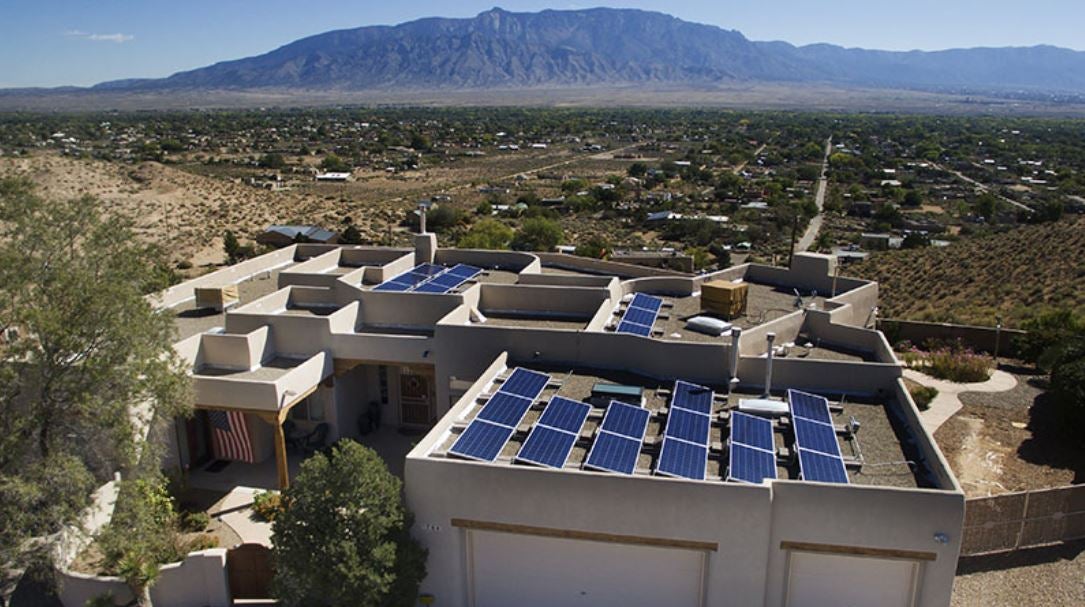 After five long years, New Mexico’s solar tax credit is back! The tax credit, which previously helped over 7,000 New Mexico residents save thousands on their solar panel installations, was just signed back into law by Governor Michelle Lujan Grisham.

Now, homeowners can get even more savings from installing a solar panel system then they previously would have. Plus, the incentive being reinstated could give a much-needed boost to the state’s solar industry.

New Mexico’s solar tax credit had expired in 2016, after the previous governor, Susana Martinez, pocketed several attempts to extend it. Martinez gave no explanation as to why she vetoed the proposed incentive extensions, but she is the recipient of campaign funding from, and maintains close ties with, the oil and gas industry.

Governor Grisham, on the other hand, made it clear that the environment was one of her first priorities. After less than one month as governor, she signed an executive order that expanded the state’s renewable portfolio standard and mandated the development of new regulations to reduce methane emissions from the state’s fossil fuel industry.

She also expressed her support for Senate Bill 29, the bill that resurrected the state solar tax credit, by releasing the following statement when the bill was introduced:

“By reinstating the solar tax credit, we’re making sure New Mexicans have an easier path to installing solar on their homes and businesses. This not only saves consumers money but reduces our carbon footprint, moving New Mexico closer to our absolutely essential climate goals. I applaud the Legislature for supporting this bill to expand renewable energy jobs in New Mexico.”

The initial support and the eventual signing of Senate Bill 29 further emphasized Governor Grisham’s dedication to moving New Mexico towards a greener future.

Similar to the federal tax credit, New Mexico’s solar tax credit provides you with money that goes towards your income taxes when you install a solar system on your home. It can also be used for systems that are installed on commercial properties.

How much is the New Mexico solar tax credit?

The state tax credit is equal to 10% of the total installation costs of your solar panel system and cannot exceed $6,000 per taxpayer per taxable year.

If the amount of your credit exceeds the amount that you owe in taxes for that year, the remaining credit can be carried over for up to five years.

For example, let’s say your New Solar Market Development Tax Credit is equal to $2,000, but you only owe $1,500 in state income taxes. The remaining $500 left of your tax credit can be applied to your state income taxes the following year.

Who is eligible for the New Mexico solar tax credit?

In order to be eligible for the incentive, your solar system must:

Applications are not currently available on the Department’s website. Your solar installer will be able to help you with the application process.

How much can you save with New Mexico’s solar tax credit?

The New Mexico solar tax credit has the potential to save homeowners thousands of dollars on the cost of installing solar, effectively making solar more affordable than ever.

Even before the return of the state tax credit, switching to solar in New Mexico would bring you substantial savings on your electric bill. But the new solar tax credit really pushes your savings over the top, making solar an even better investment than it was in the past!

Get a personalized estimate of how much you can save when you install solar panels on your home in New Mexico with our free solar calculator.

Are there other New Mexico solar incentives?

The quick answer is, yes! The state solar tax credit can be used in addition to the 30% federal tax credit. Here’s an example of how claiming the federal and state tax credit would impact the total cost of your solar installation:

Table 1: Installing solar in New Mexico, before and after tax credits

These savings don’t include any of the other rebates and incentives available in New Mexico. For instance, net metering, a popular solar incentive, is offered by all utility companies in the state.

Net metering is a system in which your utility company will pay you for every kilowatt-hour your solar panel system produces that isn’t used to power your home.

Below is a video that explains in more detail how net metering works.

Other New Mexico solar incentives will bring your savings well beyond the thousands you get in federal and state government tax credits and include property tax exemptions and renewable energy credits.

The new solar tax credit has the potential to do more than just save homeowners money on solar panels.

Hopefully, the incentive will boost New Mexico’s solar industry, which began to suffer after the previous state solar tax credit expired in 2016.

Between 2016 and 2019, New Mexico saw a 31% decrease in the number of jobs in the solar industry. This steep decline in solar jobs was mostly due to the expiration of the previous solar tax credit.

Without the incentive, less people were looking to install solar panels.

Installers are just as excited as homeowners to have New Mexico's solar tax credit back! Image source: Sol Luna Solar

Some solar installers had to lay off workers in order to stay afloat. Other installers left the state entirely because there weren’t enough jobs.

The New Solar Market Development Tax Credit is intended to increase the number of solar purchases and installations in New Mexico. With more installations comes the need for more solar installers, leading to a boom in the number of jobs in the state’s solar industry.

The incentive should be able to recover some, if not all, of the 908 jobs that were lost after 2016.

The revival of New Mexico’s solar tax credit is exactly what the state’s solar industry needs to make a comeback. The incentive is expected to bring back many of the solar jobs that were lost when the tax credit had expired back in 2016.

New Mexico is one of the largest oil producers in the US, so any laws that help transition the state to a cleaner and greener job force (and future!) is a sure step in the right direction.

The incentive will increase the number of solar installations, as well. As more solar is installed, New Mexico can rely less on fossil fuels and focus more on renewables.

Plus, home and business owners can save thousands over the lifetime of their solar panel system. In fact, you can calculate your total costs and savings by using the solar panel calculator below.