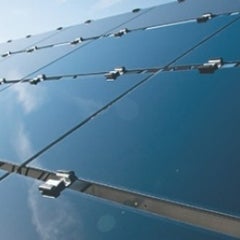 Today (April 5) Southern Co.’s Southern Power announced that one of Texas’ biggest solar farms—if not currently the largest—is now operational. The 120 megawatt (MW) East Pecos Solar Facility is now providing power to Austin Energy and its customers, just over a year after construction started on the project.

The project will help Austin Energy meet its ambitious renewable energy goals. It’s approved a plan for more than 800 MWs of solar power to come online by 2020, with 600 MWs of utility-scale solar slated to come online in 2017.

"Austin Energy was an early adopter of West Texas wind power and is pleased to take delivery of the power generated by the East Pecos Solar Facility," said Austin Energy General Manager Jackie Sargent. "We currently supply more than 30 percent of our customers' needs from renewable power and are well on our way to our target of 55 percent supply by 2025.”

The power from the project was bid at low prices, an average of 3.8 cents per kilowatt hour,

The project is under a 15-year power purchase agreement with Austin Energy. The utility also is purchasing the renewable energy credits the system produces, which it plans to apply to meet the Austin City Council’s goals for renewable energy and carbon reduction.

"The East Pecos Solar Facility joins our growing renewable fleet in Texas, and we look forward to operating it for the benefit of our customers," said Southern Power President and CEO Buzz Miller. "By providing clean, affordable, wholesale generation, we are able to deliver on our promise to help build the future of energy."

Southern says it now has three solar projects in Texas, making it the owner of one of the state’s largest solar power portfolios. However, the company has a much larger renewable energy portfolio across the US. In all it has a pipeline of 36 solar, wind and biomass projects totaling 32 gigawatts.