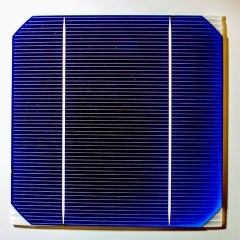 The majority of silicon solar photovoltaics use silver to conduct electricity but thanks in part to help from the National Renewable Energy Laboratory, TetraSun is using copper as a conductor instead of silver.

The approach, along with the results and the cost-savings have helped TetraSun and NREL win a 2013 R&D top 100 award from R&D Magazine and stoked enough interest in TetraSun that First Solar bought the company in April, allowing one of the world’s leading thin-film PV manufacturers to get into the silicon PV market. 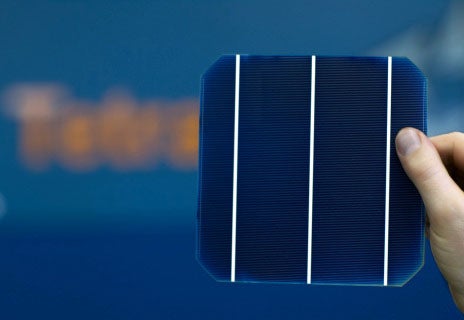 The company is making the waves primarily because it’s looking at doing silicon PV in a way that significantly reduces the cost of PV solar power by using simplified manufacturing techniques and cheaper materials—namely copper instead of silver—to harvest electrons produced by the cell. While copper is a good conductor of electricity, it has been hard to apply it in a way that produces the wanted results in a silicon PV cell because the copper doesn’t want to stay in that form. And the copper ribbons on the cells are about 50 microns wide—about one-twenty-fifth the width of a human hair, according to NREL.

"As the margins go down with silicon, the cost of every component becomes significant, especially when you're talking about square miles of this material," said NREL Principal Scientist Mowafak Al-Jassim. "We're trying to make enough of these solar panels to generate gigawatts of power. That's a lot of silver. We needed to replace silver with an equally good conductor, but one that was much cheaper."

"It's a potentially disruptive technology, and that's why we decided to work with TetraSun," said NREL's Martha Symko-Davies. She headed the Energy Department's SunShot Initiative PV Incubator program, which awarded TetraSun a grant in 2010. The technology already is capable of producing silicon PV cells that are about 21 percent efficient—rivaling the performance of many current silicon PV cells that are about 22 percent efficient, according to NREL.

The team was able to produce the 21 percent efficient cells just 18 months after starting up, which Harin Ullal with NREL said is unusual. "That compares to 17 percent to 19 percent efficiency for screen-printed silicon cells," he said. Ullal managed the research for NREL. "By 2020, this technology could potentially reach the Energy Department's SunShot target of one dollar per watt for PV systems and about 6 cents per kilowatt hour for electricity generation," Ullal said.