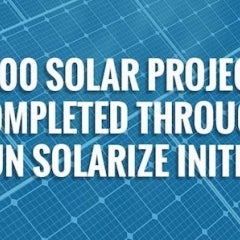 Solarize campaigns in New York are working. By using the power of collective purchasing the campaigns have lowered the cost of solar for residences and businesses. Through the NY-Sun Initiative, the state has supported 81 Solarize campaigns across the state since 2014 with nearly $830,000 in technical and marketing support. That’s led to 2,439 solar power projects either already completed or underway.

The initiative has supported fully 19.47 megawatts of photovoltaic installations through its first three rounds of funding. In the most recent round NY-Sun made community solar eligible for Solarize for the first time. That allowed 175 residents and small businesses in the Southern Tier and Mid-Hudson Valley regions of New York to participate in a Solarize campaign without putting solar on their roofs.

"New York leads the nation in advancing aggressive clean energy policies and by supporting local projects across the state, our communities are realizing the benefits," Governor Andrew Cuomo (D) asserted. "Solarize campaigns are bringing renewable energy to residents and businesses at an affordable price while providing resiliency to the electric grid to ensure a cleaner, greener New York for all."

Through the Solarize campaigns New Yorkers have used their collective purchasing power to save an average $1,476 per installation, according to NYSERDA, which manages the NY-Sun Initiative. That totals roughly $3.6 million in savings across the state.

"As a result of the Governor's leadership, we are seeing communities throughout New York State invest in their future by incorporating solar into their everyday lives. The Solarize campaigns are bringing economic growth and building on the state's momentum that has already helped New York increase solar by 1,000 percent since 2011,” said Richard Kaufman, chairman of Energy and Finance for New York.

Solarize campaigns typically last between six months and nine months and are managed by partnerships including local officials, municipalities and businesses. The campaigns offer a chance for people in the communities to go solar with selected companies that offer group purchasing discounts and pricing transparency. Such programs help communities become more solar friendly and achieve status at SolSmart Communities.