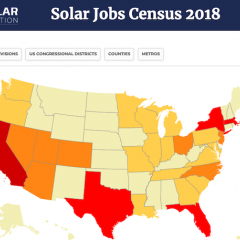 To help illustrate how solar is creating jobs in every state in the US, The Solar Foundation has released its solar jobs map, which shows the number of solar jobs by sector in every metropolitan area across the nation. The interactive map allows users, municipalities, politicians and more understand what types of jobs solar is creating locally, from installers to manufacturing jobs.

The map and its tools, which are based on the annual Solar Jobs Census, are available at SolarStates.org. In addition to the solar maps, the organization also released detailed fact sheets on solar jobs in all 50 states, as well as the District of Columbia, and Puerto Rico. 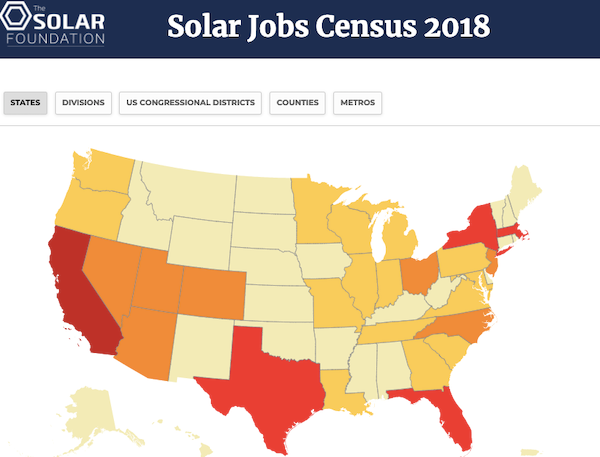 This year it found that the area with the most solar jobs overall was in was in California in the San Francisco, Oakland, Fremont region. While it had over 22,000 solar workers in region, solar jobs in the region fell compared to 2017, the report found. Two other regions in California, Los Angeles and San Diego were among the top five regions as were New York and Boston.

The solar jobs map also highlighted areas that saw the most growth in solar jobs in 2018. It showed that Chicago, Miami, Seattle, and Minneapolis-Saint Paul, were among the regions that added the most solar jobs last year.

“It’s a point of pride that Chicago was one of the two leading metro areas for solar jobs growth last year. With over 1,000 solar jobs added in 2018, we’re already enjoying the benefits of a clean energy economy in Chicago. Our commitment to 100 percent renewable energy will help ensure even more jobs growth takes place in the coming years,” said Chicago Mayor Rahm Emanuel.

The map now includes four years of data showing the year-over-year trends in solar job employment. It also shows workforce demographics by state and the solar policies they have adopted.

“Colorado has a history of leading in clean energy. We want to build on that leadership by expanding the state’s green economy and achieving our goal of 100 percent renewable energy by 2040. It’s imperative for our health, our economy, and our Colorado way of life,” said Colorado Governor Jared Polis.