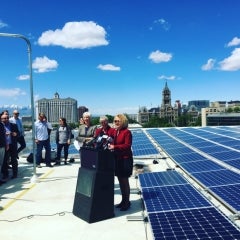 In recent decades Utah has been warming at twice the global average causing reduced snowpack, changes in the water system and extreme weather conditions. To address these issues, Salt Lake City Mayor Jackie Biskupski and other city officials have agreed to transition the city to 100 percent renewable electricity sources, like solar and wind, by 2032 and to reduce the city’s carbon footprint by 80 percent by 2040. The Climate Positive SLC commitment is a bold step in a deeply conservative state with few renewable energy incentives.

“We can tackle this challenge and deliver clean energy solutions that will simultaneously improve air quality, protect public health and deliver local jobs,” Biskupski stated. “Leading on climate change today is an obligation we all share with each other and to future generations.”

The Climate Positive SLC commitment builds on a joint resolution proposed by the mayor and adopted by the city council earlier this month (July 12). The resolution acknowledges the scientific consensus that carbon pollution from electric generation is closely linked to climate change. To help reduce the damaging effects the mayor previously announced that all government operations would be powered by renewable energy. Now, the scope has expanded to include all electricity on a city-wide scale.

To help offset reduce its emissions and its energy costs the city is purchasing 3 megawatts of solar power through the Subscriber Solar program, which is generated from a solar farm two hours south of Salt Lake City. The Subscriber Solar program was recently made available through Rocky Mountain Power. It allows customers to purchase energy at a fixed rate, locking-in costs for up to 20 years.

“This is the most ambitious step ever taken by Salt Lake City to address the threat of climate change,” Biskupski said.  “This commitment places the city among leading communities worldwide that acknowledge our responsibility to rapidly reduce emissions and forge a new path forward that protects our economies, societies and overall human well-being.”

Indeed, in going 100 percent renewable Salt Lake City joins a small but growing number of US cities that have committed to 100 percent renewable energy. Just last December the city of Aspen, CO edged out Georgetown, TX in becoming the third renewably powered city in the US. In terms of size, providing renewable energy to Salt Lake City’s 321,000 residents may seem like quite a feat. However, with a population of 1.4 million, San Diego is thus far the largest city in the country to plan to transition to just clean energy sources, proving size does not matter when it comes to clean energy.  Meanwhile, San Francisco continues to improve its renewable energy efforts by mandating that all new buildings include solar panels.