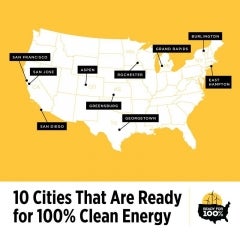 A report released last week showcases how 10 US cities committed to 100 percent clean energy and how their decisions are creating local jobs, saving residents money and reducing pollution. It’s the first report out of The Sierra Club’s new Ready for 100 campaign, an effort to get 100 US cities to transition to 100 percent renewable energy.

So far, 16 cities have committed to 100 percent renewable energy and, according to The Sierra Club, a few have like Aspen, CO, and Burlington, VT, already met their goals. “Not only are cities ready for clean energy—it’s ready for them. Clean energy keeps money in local government coffers, creates local jobs, saves people money, cuts pollution, and saves lives,” said Jodie Van Horn, director of the Sierra Club’s Ready for 100 campaign. “Cities, long the hotbed of innovation, the drivers of change, and the incubators of solutions to the world’s biggest challenges, are ready for 100 percent clean energy.” 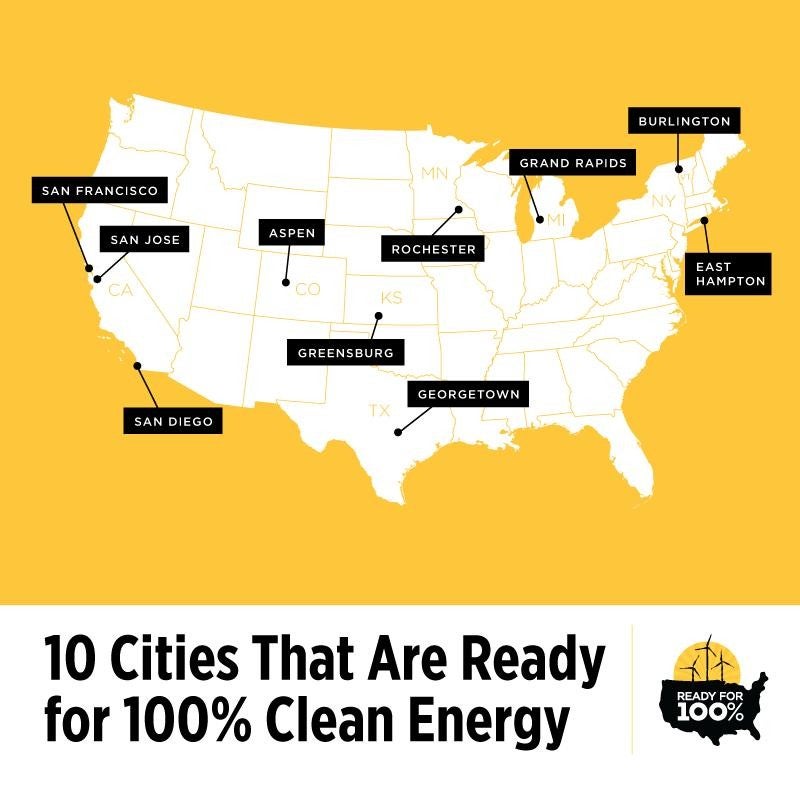 Although there are various reasons for cities to entertain going 100 percent renewable, many cities are growing concerned about the local effects of climate change. For instance, Utah has been warming at twice the global average in recent decades causing, among other things, changes in the water system and extreme weather changes. There city officials recently proposed Salt Lake City transitioning to 100 percent renewable energy by 2032 and to reduce its carbon footprint 80 percent by 2040.

Now that communities are making the transition they’re helping others learn about the economic and environmental benefits of switching to renewable energy sources. Aspen, for instance, became the third city to successfully transition to 100 percent renewable energy. It’s also the kickoff location of the Sierra Club’s #Readyfor100 National Tour.

“A lot of hard work, a commitment to a long-term goal and having a vision is what enabled us to get here,” said Aspen Mayor Steve Skadron. “We’ve accomplished what we thought was impossible...I wanted to have confidence that what we’re doing is more than just a measure for us to celebrate our own successes. I want to make sure that we have things that are replicable and scalable for other communities to adopt.”

The race is on to become the next city to achieve the accomplishment. The eighth-largest city in the country, San Diego, announced last December that it will switch to 100 percent renewable energy, making it the largest city in the country to make the commitment. “San Diego is known around the world for our beautiful environment, so it's only fitting that we help set the standard for how to protect it. We’re moving in a big way toward renewable energy use because it fuels green jobs and will improve the quality of life for our residents,” said San Diego Mayor Kevin Faulconer. “It's about handing down to our children a city that is cleaner than it was when we received it.”