Plug-and-play solar panels can plug into conventional residential power outlets and could provide up to 57 gigawatts of renewable energy to the grid. That’s equivalent to the electricity needed to power both New York City and Detroit and could save customers an estimated $13 billion annually, finds a recent study published in Renewable Energy.

“Plug and play systems are affordable, easy to install and portable. The average American consumer can buy and install them with no training,” says Joshua Pearce, an associate professor of materials science and engineering at Michigan Tech University, who authored the study. Pearce estimates that if widely adopted plug-and-play solar panels could generate four times the amount of energy generated from solar produced last year across the US. 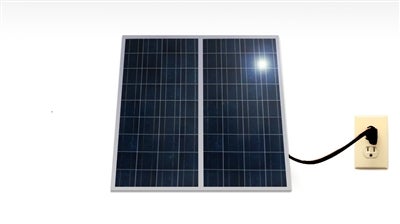 Such panels have variable wattage options and are relatively affordable, costing just a couple hundred dollars each. A “prosumer”, or what Pearce defines as an on-grid consumer who also produces energy, has the ability to start with one solar panel and add panels over time as their demand for more energy increases.

With the price of solar equipment decreasing and the number of community solar farms and other choices for solar available throughout the US, more and more consumers are looking to use renewable energy. For instance, a poll recently conducted by Gallup reveals that 79 percent of Americans want more solar energy options but can’t afford to install solar systems on their homes or because they rent or own units in multi-unit buildings.

Plug-and-play solar technology could start to grow in 2017. For instance, startup SunCulture Solar announced that it will release two models of its SolPad solar panels. The models include inverters to convert the DC power from the solar panels into AC power used in homes and businesses and battery back-up capabilities that can be charged by the grid or by the sun.

However, adoption of plug-and-play solar is hampered by local and regional utility regulations that prohibit the use of such systems. But, according to a paper published in Solar Energy earlier this year, Pearce and his colleagues reviewed all regulations applicable to plug-and-play systems across the US and found that there were no safety issues with equipment currently available on the market. The only risk to avoid is overloading in home circuits and suggests that plug and play users limit their systems to a kilowatt or less. Accordingly, some utilities have said that plug-and-play solar panel systems have no safety or technical issues and have permitted their use.

“This is an area where less regulation could really help renewable energy. We know that the technology is safe, and the law should reflect that. Some utilities have embraced plug and play, and some have ignored it because they think it’s a pittance,” Pearce argues. “But plug-and-play solar is something that can help most Americans.”