A new report out from the Department of Energy’s National Renewable Energy Laboratory (NREL) looks into what solar policies at the state level are most effective at supporting solar PV installations. The report was supported by funds from the SunShot Initiative to reduce the costs of solar. 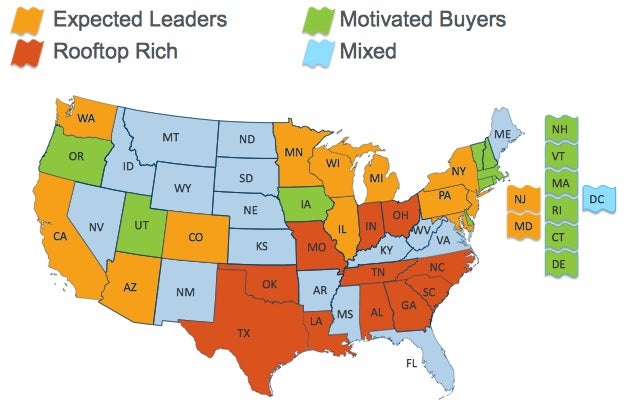 The report, "The Effectiveness of State-Level Policies on Solar Market Development in Different State Contexts," organizes the 48 contiguous U.S. states into four peer groups that it based on shared non-solar policy characteristics. The report grouped states into four groups: expected leaders, rooftop rich, motivated buyers and mixed. While it anticipated that the expected leaders would have the high PV penetration, some of the states in each group have relatively robust solar industries as of 2014.

The report also looked at which solar policies had the most effect, including set asides in renewable portfolio standards (RPSs), interconnection policies, net-metering policies, whether third-party ownership (TPO—solar leases and power-purchase agreements or PPAs) is allowed and the suite of policies.

"Although it is widely accepted that solar policies drive market development, there has not been a clear understanding of which policies work in which context," said lead author Darlene Steward. "This study provides much-needed insight into the policy scope and quality that is needed to spur solar PV markets across the United States."

The expected leaders group are anticipated to have high solar penetration. It included states like Arizona, California, Colorado and New York—states have good solar resources and high American Council for an Energy Efficient Economy (ACEEE) scores, with high potential for residential solar installations.

The motivated buyers group consisted of states with poorer-than-median technical potential for rooftop solar PV. However residents might have high interest in PV for reasons including high electric prices or an interest in energy issues. These states include Iowa, Massachusetts, Oregon and Utah.

The final group, the mixed group, have a lower-than-average ACEEE score but show a broad range of income, electricity price, and technical potential, NREL said. Such states included the Dakotas, Florida, New Mexico and Maine.

The report found that the effectiveness of solar policy is influenced by a number of factors, among them median household income, solar resource, electric prices, and local interest in renewable energy. In terms of solar policies, the two most important were a suite of policies and RPS set-aside policies, the report found. Of the latter the report stated, “The correlation is particularly strong in states with less supportive non-policy market factors. This is borne out in the mixed group of states, which has a lackluster non-policy-driven market for solar, and the findings indicate the impact of solar set-asides is particularly strong in this group.”

Net-metering and TPO were important to a lesser extent and the interconnection score had the least correlation between the amount of solar installed and solar policies.

The lab anticipates releasing additional research on the subject this summer.