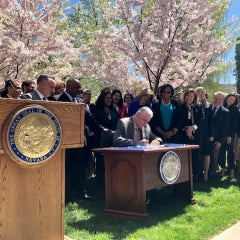 Nevada became one of a growing number of states that has recently upped its commitment to renewable energy and reducing the use of fossil fuels, drawing praise from renewable energy advocates. On Earth Day (April 22) Gov. Steve Sisolak (D) signed Senate Bill 358 into law which will move the state to 50% renewable energy by 2030 and to 100% by 2050.

“Renewable energy is a major cornerstone of my economic development plan, and this bill will put Nevada back on the path toward renewable energy leadership on a nationwide level and continue to bring well-paying jobs to our communities,” Sisolak said. “Today, Nevada sent a message to the country and world that the Silver State is open for business as a renewable leader, and our commitment to growing our clean energy economy transcends party lines.” 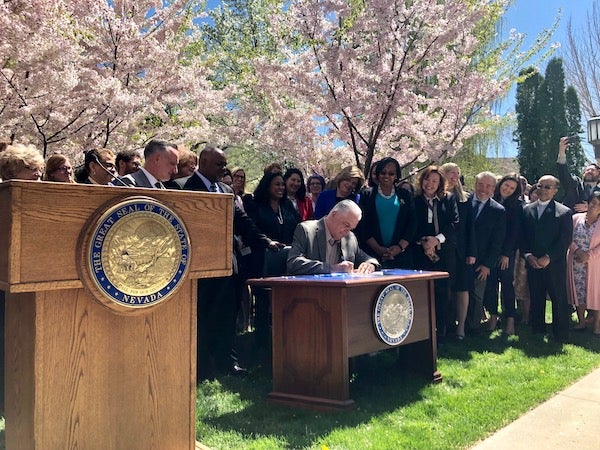 The new law was introduced by state Sen. Chris Brooks (D) and passed both houses of legislature in the state unanimously. It follows a similar initiative approved by state voters in last falls elections, Question 6.

It doubles the state’s previous renewable portfolio standard (RPS), which was at 25% by 2025 and sets forth the roadmap to eliminating the use of fossil fuel electric generation in the state. It implemented the original policy in 1997, becoming the second state in the country to do so. In boosting its RPS to 100% it joins a handful of other states including California and Hawaii that have also made the change to their RPS policies.

"Nevada has long been a leader in solar, and the approval of Senate Bill 358 again puts the state at the forefront of our country’s clean energy transition. As a result, Nevadans will benefit from not only cleaner air and lower energy bills, but also from the thousands of new jobs this measure will create,” said Abigail Ross Hopper, president and CEO of the Solar Energy Industries Association. “Governor Sisolak, Senator Chris Brooks and the State Legislature deserve credit for listening to voters and moving quickly to enact SB 358.”

Nevada’s previous RPS has already led to 45 renewable energy projects in the state. That’s also generated $8 billion in capital in the state and created 8,600 construction jobs—the state also has more than 32,000 clean energy jobs. The expanded RPS could create 11,170 jobs by 2030, generating $1.5 billion in economic activity in the state.