Solar advocates are applauding Massachusetts’ legislative proposal to extend the Solar Renewable Energy Credit (SREC 2) program into the summer of 2017. The state’s Department of Energy Resources (DOER) announced the proposed extension after the incentive program helped develop more than 1.6 gigawatts of solar. The plan will also address the transition and implementation of its successor program, currently known as the next generation incentive program.

“Over the years, Massachusetts has done a marvelous job encouraging an emerging solar industry, creating thousands of jobs, and helping to put clean energy resources into the hands of mainstream people and local businesses,” said Bill Stillinger, President of the Solar Energy Business Association of New England. “An SREC extension will avoid disruption and we look forward to working on our state’s progress toward a clean energy future.” 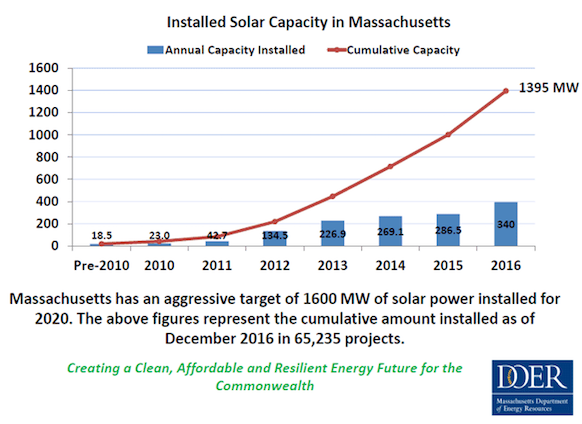 Continual market growth, incentive programs and progressive policies have allowed the renewable energy sector in Massachusetts to maintain a 6 percent growth rate and expand into a $18.8 billion industry. Solar’s success in Massachusetts provided the state with 6,317 more clean energy jobs between 2015 and 2016, employing a total of 105,212 workers in the state.

However, as federal environmental and energy policy under the new administration of President Donald Trump (R) are likely to shift in favor of the fossil fuel industry, Massachusetts already is taking multiple actions to buck those efforts. Beyond extending SREC 2, last week lawmakers introduced legislation that would eliminate the use of fossil fuels, even in the heating and transportation sectors, by 2035. If passed, the aggressive goals would exceed Hawaii’s RPS goals to consume 100 percent clean power by 2045.

With the extension, SREC 2 will continue to provide financial support to expand solar installations across the state while controlling costs and maintaining a competitive and diverse market for solar manufacturers and developers. It expanded on the success of the initial plan, SREC 1, which launched in 2010 and supported 400 megawatts of solar development.

“This action will allow new solar projects to move forward, creating jobs, valuable investment dollars, and a well-deserved reputation for Massachusetts as one of America’s top solar states. SEIA is looking forward to working with state leaders to finalize the details of both the extension plan and the new incentive program,” said Sean Gallagher, vice president of state affairs at the Solar Energy Industries Association (SEIA).