Hawaii’s largest utility Hawaiian Electric Companies (HECO) submitted a proposal to the state utility commission for 262 more megawatts (MWs) of solar energy coupled with a whopping 1,048 megawatt hours (MWh) of energy storage. The utility is looking to renewables to reduce energy costs in the state while reducing its use of fossil fuels.

Hawaii is leading the US in states transitioning to renewable energy. Now it’s likely to lead in energy storage as well. As an island state far from the mainland US shores the state has had to import oil or diesel to generate electricity, which is costly, about 15 cents per kilowatt hour  (kWh), according to the utility. 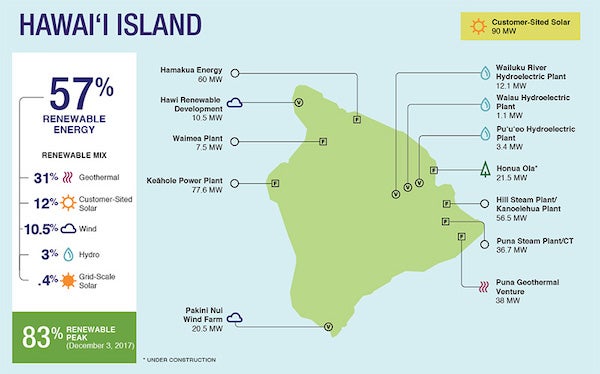 "We believe strongly that the renewable energy transformation should benefit everyone and these seven projects will help stabilize customer costs while reducing our reliance on imported fossil fuel and cutting greenhouse gas emissions," said Shelee Kimura, HECO senior vice president of business development and strategic planning.

The company also said that prices for six of the seven projects its planning have lowest cost yet seen for renewable electricity in the state. The lowest cost for the projects is the 30 megawatt Waikoloa Solar, which includes 120 megawatt hours of energy storage, which will provide electricity at a rate of 8 cents per kWh. The most expensive is the smallest, the 15 MW Paeahu Solar project with 60 MWh of storage, which will provide electricity at 12 cents per kWh—still below the cost of fossil fuels.

The prices reflect the flexibility the new installations will have, according to HECO. The energy storage systems can store up to four hours of electricity, allowing the facilities to dispatch energy as needed. For instance, they can dispatch energy during peak demand to reduce the need of more expensive energy from other sources.

The projects are planned for three of Hawaii’s islands, three on Oahu, two on Maui and two on Hawaii Island. The Hawaiian Public Utilities Commission will review the planned projects and make a decision on them.

The utility, which aims to move to 100 percent renewable energy, has already made significant strides with more than 500 MWs of contracted renewable energy and nearly 80,000 private rooftop solar systems online. It said it’s reduced its use of fossil fuels by 26 percent in the past decade, reducing its use of fossil fuels by 48 million gallons of oil annually. If the proposed projects are approved and completed it would reduce the utility’s energy use further, reaching an accumulative 100 million gallons of oil saved yearly.