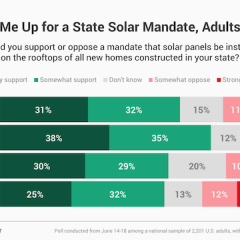 Fully 63 percent of US adults support state mandates for solar power on new homes and 58 percent of adults in the US are interested in adding solar power to their homes, according to recent Morning Consult polls. The polls reached 2201 adults across the US and come after California became the first state in the nation to enact such a mandate in May. 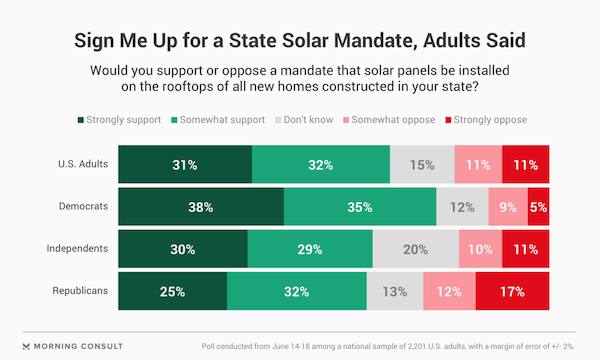 Whitten also noted that that the high numbers of those who would consider going solar don’t always translate into more people actually going solar. “As you go into deeper levels of commitments, the numbers start to fall,” he said. While the more recent poll showed support for solar mandates for new homes, Whitten also observed that it doesn’t appear other states are currently taking such actions.

The May poll showed that 53 percent of respondents would consider solar power even though they said it’s harder for first-time homebuyers to afford a home now than it was just five years ago. There also is some concern that cost of solar on new homes in California will increase up-front home costs as well. But solar power can save them money on their electric bills reducing the overall cost of homeownership over time.