It’s no mistake that Vermont is called the Green Mountain State. It was ranked as the most environmentally friendly by Wallethub’s 2017 Greenest States in the US. Vermont achieved the top spot by accumulating 78.88 out of 100 possible points for its environmental quality, eco-friendly policies and contributions to reducing climate-change.

The rankings highlight progress US states have made in setting sustainable goals and their efforts to reduce climate change while focusing on solutions that will benefit the economy and the environment. Wallethub’s analysts compared each of the 50 US states on 20 key metrics including states’ solar capacity, air quality, total energy consumption and carbon-emissions. Each metric was assigned values based on a 100 point system, creating its overall ranking. 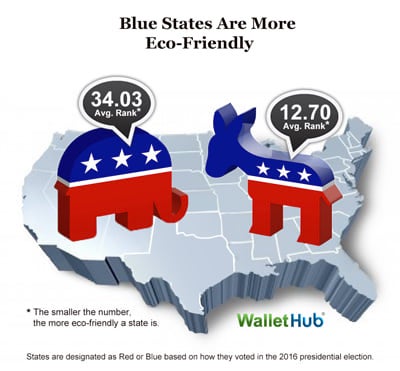 “Economic growth in many areas is coming from environmentally friendly technologies, such as solar PV and energy-efficient building design. Solar energy now employs more than 250,000 people nationwide, and that number will continue to grow. State and local governments seeking economic growth opportunities would be well advised to look to renewable energy and energy efficiency,” said Paul Komer, faculty affiliate of environmental studies at University of Colorado at Boulder.

California, the nation’s largest solar market, ranked 13th overall with a score of 64.17, yet ranked 43rd in environmental quality due to its poor performance for overall air-quality. Oregon ranked third with an overall score of 71.25 and first in eco-friendly policies for its consumption and development of renewable energy. However, Oregon ranked 24th for its contribution to reducing climate-change through carbon-emissions, gasoline consumption and energy used per-capita. Wyoming ranked last overall with a score of 35.78.

To encourage better results, the research suggested that state and local agencies must work together to encourage the expansion of renewables address climate change issues. “State governments can work with electricity providers to ensure that renewable energy, notably wind and solar, gets fair consideration. The costs of wind and solar have dropped sharply, and many states are finding that these sources can provide electricity at a lower cost than traditional sources such as coal and natural gas,” added Komer.