That’s the conclusion of a report from the Lawrence Berkeley National Laboratory released last week (Dec. 12), which found that a new photovoltaic installation on a home leads to a $5,911 price boost per kilowatt installed—at least in California, where the report, “Exploring California PV Home Premiums” gathered data from. The report is an important sign that not only is solar good for the current homeowner, it’s also becoming more attractive to future homeowners.

In the past there has been some debate as to whether or not solar power, particularly PV, added value to homes. This report and a former, 2011 report from the LBL, offer compelling proof that in the nation’s largest homeowner market, that PV does add value. 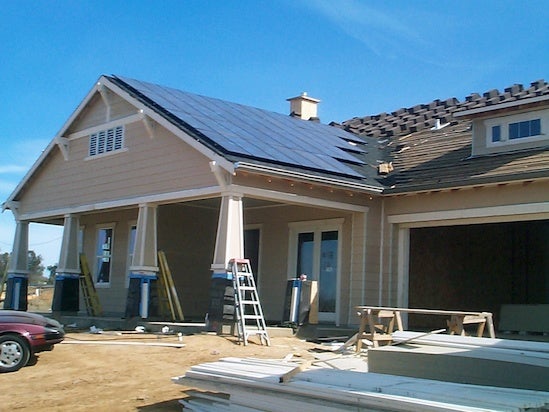 Part of the issue behind properly assessing the amount that solar adds in value to a home is that appraisers didn’t assign value to the PV array. “Still, some appraisers and other home valuers assign no value to a home’s PV system, and those who do often cannot find comparable home sales to help determine the PV premium,” the report stated.

Those appraisers that have attempted to calculate the value of solar on homes have tried looking at a number of ways to do so, including the value generated by the PV array over time and the installed cost equivalent of the system. The LBL report looks at the issues in a more cohesive way. It used regression analysis to determine PV home sales premiums, explores difference between size and age and compares actual premium to predictions based on the other approaches of to evaluating the premium that PV adds to a home.

“Our analysis offers clear support that a premium exists in the marketplace; thus, PV systems have value, and their contribution to home values must be assessed,” wrote lead report authors Ben Hoen and Geoffrey Klise in an executive summary of the report. “We find that premiums in California are strongly correlated with PV system size and weakly correlated with PV system age.” So while a new system adds $5,911 per kilowatt, each year the system ages drops the premium by $2,411. The report also finds that a newer system adds more value than an older system particularly after it has reached 6 years in age. Still, there is an increasingly significant number of new homes in the state with solar.

The premiums people were willing for were also higher than expected showing that solar adds further value to homes. The study said there could be a number of reasons. Among them, the “green cachet” added by a solar array, but also potential avoided transaction costs, utility-specific retail rates and tiered rates and some other effects that could overvalue a PV array.

Still, the data is limited because it focusses only on the California market. The researchers suggested that in the future, such studies should look at additional markets and recent crash and subsequent recovery in the home market. It also suggested looking at whether outright system ownership affects the cost as opposed to third-party ownership. “These further investigations will help improve our collective understanding of PV premiums, and will help further tune the income and cost based valuation tools that develop to predict the impact of PV systems on homes prices.